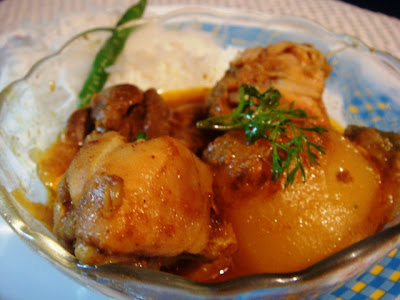 Caveat: Tales of slaughter ahead.


I'd been eating gingerly after my last food poisoning attack. But the salt less curd rice that I ordered for Friday lunch was the limit. So I decided to make a chicken curry or Bengali Murgir Jhol at home. Dr Miranda said its good to have chicken while recovering from a stomach bug. But to make it at home instead of ordering from outside.

The plan was to make something light, without chillies and yet tasty. And surprise, surprise, it did turn out to be yummy:). You can do wonders with curd, ketchup, whole garam masala and a dream.

The dish was significant because of another reason. We normally buy cold storage chicken. And only legs or drumsticks. The stuff we got off late were more like dinosaur legs than chicken ones. And tasted as stale.

So K got this idea of buying live chicken. I went to to this shop at Pali Market. Took me years back to my school and college days at Calcutta. Every Saturday my Mom would send me to Bansdroni Market to buy chicken. The guy would take a chicken out of the cage. The chicken would flutter its wings as the shopkeeper weighed it. Head chopped. He would hold it by the neck below his foot till the life went out of the bird. Feather plucked, skin removed ..the bird was chopped. Stomach, liver, neck and head cleaned. Packed with the rest of the meat and off I went to buy potatoes.

Now you know why I am not squeamish about meat.

Well coming back to Pali Market, the chicken buying here was more tame. The shop was in two sections. You paid at one half and the chicken was cut in the other half. I peeped in though. Puerile pleasures. It felt strange holding a warm bag of meat back versus the usual frozen stuff. Well the chicken weighed in at a kilo and hundred grammes with feathers. It was very tender. 'Kochi' as we say in Calcutta. K and I finished the entire dish at one go. Including the breast pieces which we don't usually like.

Take a tablespoon of oil in a pressure pan. Throw in a teaspoon of jeera (cumin) seeds when the oil is hot. Let it splutter add a tablespoon of mixed whole garam masala and two bay leaves. Let these cook till you get a lovely aroma.

Add two finely chopped onions. Stir and let it fry till it's soft and brown.

Add a tablespoon of ginger paste and a teaspoon of garlic paste. Stir till brown.

Add three tablespoons of tomato Ketchup. I use Heinz tomato chilly. You can use plain tomato puree but ketchup gives the dish a nice sweet zing.

Mix this and add the masala. For the masala, take four tablespoons of curd. Add a tablespoon each of turmeric, salt and cumin (jeera) powders, a teaspoon each of garam masala powder and sugar to the curd and beat it together. You can add a teaspoon of red chilly powder if your tummy is fit.
Add this paste to the onion base in the pan.

Add the chicken and three peeled potatoes (cut into two) into the pan. Let it cook on a high flame till the skin of the chicken begins to brown.

Add half a cup of water. Sprinkle a pinch of garam masala on the top. Close the pan and pressure cook.

Three whistles on high flame, twelve minutes on a simmering flame after that and you are done.
A very well flavoured curry which goes well with steamed rice, roti, bread, or if you are Kainaz, by itself.

Some readers have asked my why I use a pressure cooker. Well it cooks faster and the gravy really mixes well when steamed with the lid shut. The end consistency is nicer that way. 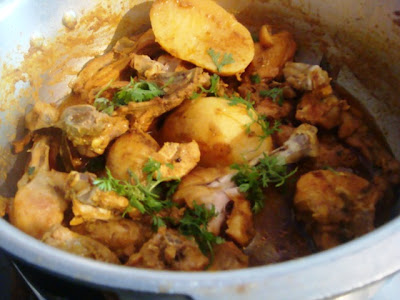 Scarlett said…
I'll try making this chicken curry. I'll have it with rotis for lunch & by itself at dinner time. Yes, I suffer from carb hang-ups too :)

Kalyan Karmakar said…
Scarlett...I was off carbs at night once. Never agai, By the way you can me this withoil too. Start with onion paste and add things to it.

Anonymous said…
Shabbir near Chandni Mkt and off C.R.Avenue in Cal is actually the place rezala conneseiurs swear by. Although I happen to understand that it has lost the goodwil of its glorious past, I fondly remember having a classy rezala about 20 years back.Then I learnt that they used coconut milk of thin consistency in rezala.
3 February 2010 at 16:34

Kalyan Karmakar said…
Hey Anon, thanks for dropping by. I didn't know that they used coconut milk for thickening rezala. I thought that coconut milk was more of South and West phenomenon. I would have expected folks in Cal or Delhi to have used flour to thicken their gravies. Well you always learn new things :)

I must say that I left my Chandni Chowk days way back. I am afraid that I don't recall Shabbir despite having done my grand and post grad at College Street.

I do remember a Muslim biriyani joint opening near Chandni Chowk Metro station around 96,97. It was on the left side of the road as you face North. Ate there a couple of times. Wonder if that's Shabbir.

My mom grew up in Delhi. But they were Pandarara Road Bongs so I must admit that I am not well acquainted with the great C R Park as well. My work trips to Delhi would take me to Khan Market
3 February 2010 at 16:51

the chicken curry sounds delicious....though I do think that for chicken, simmering instead of pressure cooking is the way to go to get a nice flavour, provided it is marinated - even if only for 10-15 minutes.
also, flash frying the chicken on high for 3 minutes each side before adding the masala and simmering really builds the flavour too.

Mutton on the other hand benefits with pressure cooking....though I deviated this Sunday when trying a Mangsho for the first time - was a success and I was thrilled.
28 November 2010 at 22:52