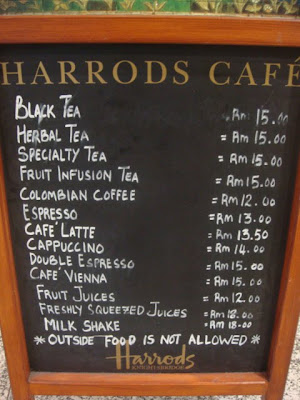 So here I am sipping coffee in my hotel room at Singapore. Feeling life slowly seep back. Convinced that travel show hosts are probably some of the hardiest professionals in the world after the U S Marines and Gordon Ramsay's trainees. And I had just travelled within one corner of a continent!

I survived the manic struggle to reach Mumbai airport last evening. I left the house in a mess for K as I packed desperately, racing against the clock. I don't know why Indian airports have to have a three hour check in for international flights! Especially when the flight itself is just five hours. And each road trip... work to home, home to airport took me more than an hour and a half each. With the driver on sudden leave Meru Cabs saved the day for me.

I ignored the tempting looking shop called Noodles at The Mumbai Airport. Instead, I cleansed my palate before going to the Orient with some tasteless, cold chicken at KFC and a dubious tasting fountain 7 UP. Needed the decaf cappuccino at the Coffee Bean to recover. But 250 Rs (5 USD) for a coffee!

Flight food was rubbish. I landed at KL for the transit. My last two international trips have involved transits as I coupled the main trip with a visit to another country.

The problem with transits is that one is zonked after a flight. The realisation that you have not reached the end, after you have been woken up when the flight landed, deflates you. The fact that another flight and not a hotel room or home awaits you makes you rue your decision to hop. I walked listlessly as my next flight was two hours later and questioned my decision to go to KL. 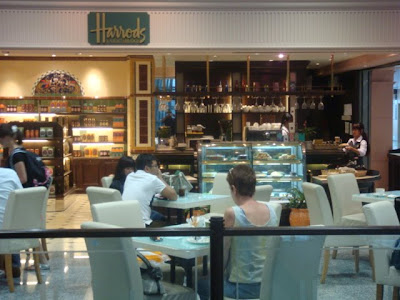 I then saw the Harrods Cafe and thought that I deserved a royal treat. A very dainty cappuccino and a raisin stuffed fruit cake and I was back in business. 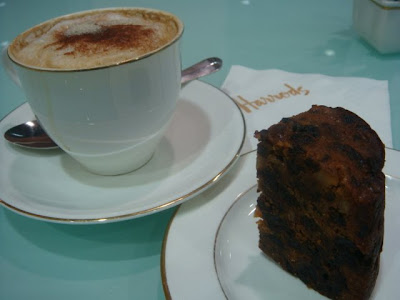 Which was good given that they only served juice and coffee in the one hour KL Singapore flight in Malaysian airline which I got onto. No wonder foreigners love the Jet Airways and the Kingfishers of the world where you would get juice and upma or sausages and a bread roll too.

Finally the hotel..same place I stayed in two years back. Familiar faces. A bed. Crash out.

Post Script: I hooked on the comp the moment I entered the room. Arindam was on G Talk and began to share his plans for our weekend. Somewhere as I was fighting sleep I remember reading about pork that melts in the mouth and crispy duck from a place called Lucky, squids, frogs (!!!!! need to read that again) and beef rendang. Did I say that I questioned my decision to go to KL? I was just being hormonal. I will be in good hands.

And as punishment for my folly I discovered that the workshop begins at 8.30 AM tomorrow and the day after!

china cat sunflower said…
i know what your next few posts will be about. and between you and arindam (he happens to be my cousin if you didn't know that already) you will probably make a lot of species extinct in KL. shudder shudder.
13 January 2010 at 16:19

Kalyan Karmakar said…
Once I am done with the species at Singapore Chinacat.

Yes I have been unravelling discovering the various vines in the Bengali food chain :)
13 January 2010 at 22:45

Michael said…
Wow! Im so jealous that you get to have coffee at Harrod's Cafe. I have heard great reviews about that. That cappuccino looks awesome, also the cake! Makes me really hungrY! Thanks for the nice pics and great post!
16 February 2010 at 17:16

Kalyan Karmakar said…
Must confess Mike that I didn't spot the Queen in the next table
17 February 2010 at 16:39