I have figured out that the best way to see K L is to not see the Twin Towers. And it helps if you know KL food aficionados such as Arindam (Chats) and Sasha. My time with them saw a Chinese breakfast/ dinner on day one, frogs on day two and lots in between. After an animated debate decisions were made on our last lunch together. Rendang was dropped ("primitive Mughlai', Arindam). As was Siew Yoke (heavenly pork but not as native as what we settled on, Sasha).

So off we drove to K L's Mutiara Damansara for lunch.


We went to Restoran Super Kitchen. The original branch is in downtown K L. Run by a father and son. You apparently get to see them make hand made noodles in front of you. But you have to wait for more than an hour and the owners apparently don't suffer impatience kindly. 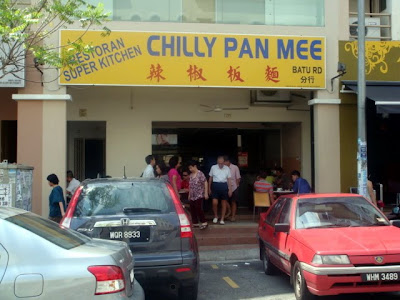 The branch at Mutiara was different. The owner greeted Arindam with a big smile. The waiter was friendly and took our from many angles. The food that followed showed why they didn't bother wasting time on developing a brand name. 'Super Kitchen' said it all. 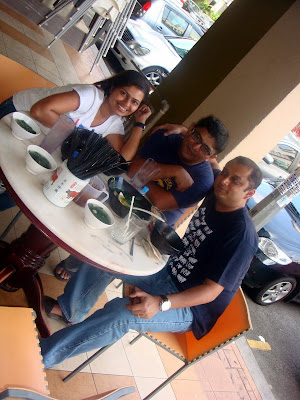 The Chilly Pan Me turned out to be the show stopper of the trip so far. A difficult task given the stellar competition.
The dish consists of handmade egg noodles, fried minced pork, fried dried anchovies and a small poached egg. They give you a pork meatball soup with it and you can make it as soupy as you want. We hardly used any. What elevates this dish from the profane to the sacred is a chilly paste/ mix which is made with eleven secret ingredients. You add this gun powder to your bowl and mix it all together and slurp in unbridled, primordial joy. 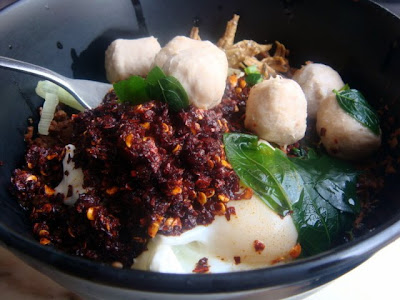 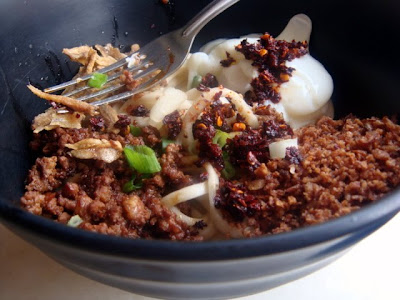 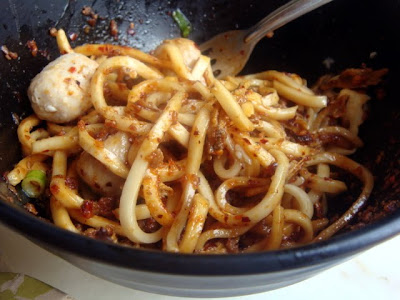 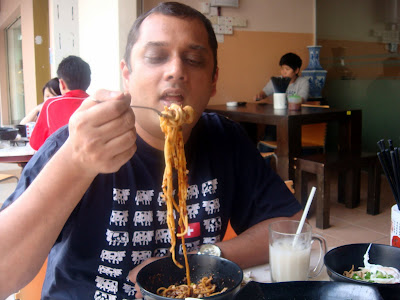 Spice masters like Arindam and his sister Jini (who F B messaged me asking whether I had had the pan mee yet) load in the chilly mix and cry in joy as they eat the dish. I was forewarned. Less intrepid folks like Sasha and me were better off with about a tablespoon or so of the incendiary stuff.
A memorable dish. A K L treasure. And a familiar taste for those who have the stir fry woks at Mumbai.
Note: I have it from the authorities that excess chilly flakes might cause the runs... but it's still worth it.
This incidentally was Sasha and Arindam's tenth wedding anniversary lunch. It hardly seems that I did not know them ten years back! 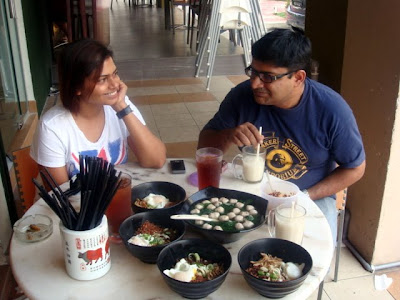 Kalyan Karmakar said…
Harman the chilly mix comes in a seaprate bowl and it is up to you to decide how much
20 January 2010 at 17:11

spice and more said…
Yum that looks fantastic. What a great combination of flavours and textures! Tempting enough to go to KL just for this...
25 January 2010 at 10:11