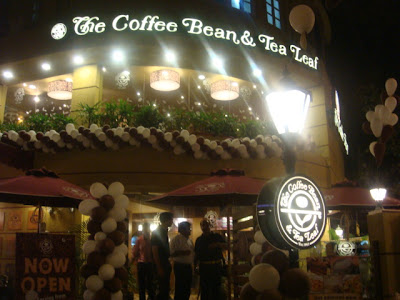 I am not a big fan of organised reviews. Specially when the food is pedestrian, your host is looking expectantly at you and you don't know what to do. No such problems this time though.

The American chain Coffee Bean and Tea Leaf (CBTL) opened a branch at Bandra's Linking Road (beside Amarsons opposite BP Petrol Pump) on Thursday. I got an invite to check out the stuff.

I reached CBTL after more than an hour's grinding drive from my office at Chinchpokli. I stepped in, went up, and did a double take. It looked exactly like the international coffee shops one drooled over during our holidays in Turkey and Switzerland. Vibrant colours, wood panelling, comfy sink in sofas, a clean loo, classy lamps, calming yellow lighting ... a land far far away from Manic Mumbai.

They have a section downstairs too and a sit out. The walls ensure that you are isolated from the heat, haze, dust and decibels of the road even if you sit outside. The way CBTL operates is that you place your order at the counter and they get it to wherever you sit.

The pricing is interesting. You have a host of stuff like basic cappuccinos and espressos and munchies like muffins, puffs and croissants at around Rs 60 - 90 (1 - 2 USD). This works well for the college crowd, the shoppers that swarm Linking Road and those who just want a regular coffee. The more esoteric drinks, sandwiches and pastas range from Rs 130 - 250 (2 - 5 USD). These eats are apparently made fresh unlike the usual precooked, plonk in a micro, coffee shop fare. 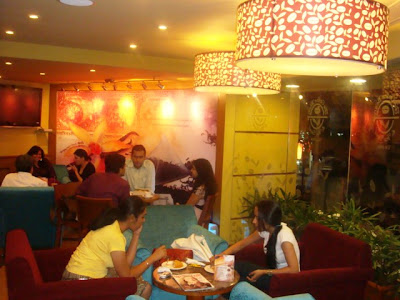 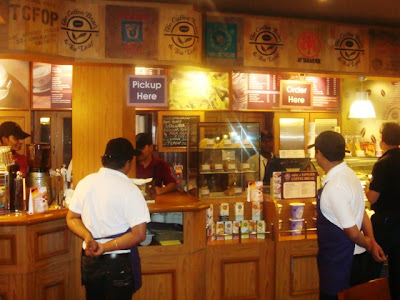 I tried a frozen peach. I quite liked this as I thought that the drink was well blended despite being a slush. It didn't smack of sugar syrup unlike coffee house ice teas. And there was a faint, reassuring taste of tea which nudged you after you sipped your drink.

Non slush lovers might not like it though. K didn't when she had it for breakfast today. She tried Peach Ice Tea when we went for dinner and loved it. 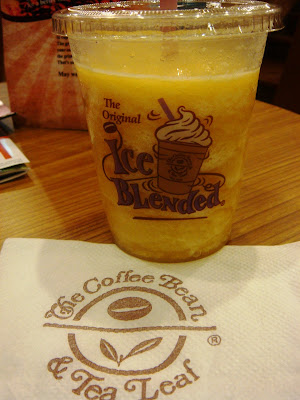 I then ordered a Norwegian Smoked Salmon sandwich (Rs 240/ 5 USD). This was a blockbuster. I have smoked salmon at quite a few restaurants and delis here. But the salmon at CBTL was very very fresh, was really ample and many layered. There was a very light and sharp Italian dressing which complemented the salmon very well. The person at the counter recommended multi grain bread. This turned out to be quite good despite my misgivings.


K and I went this morning and ordered the same with ciabata bread. The salmon was still fresh and ample een though I came as a regular customer and not a reviewer. They added a bit of tomato and pickled onion which went well with the sandwich. The salmon portion was reduced when I ordered it again at night. Did I finish it all? 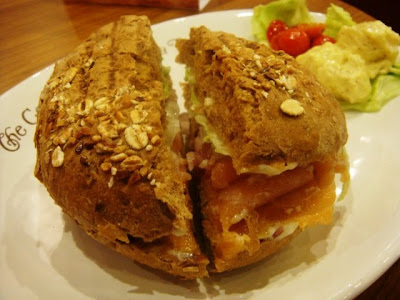 I tried the 'Ultimate Mocha'. I am not to fond of cold coffees as I find them too watery or too sweet. Except at Candies. The one at CBTL was right up there with the best. It was ice blended, yet smooth, the chocolate was just right. Reminded me of the Chicolota that I had at Starbucks Istanbul and searched for in vain since then till I came to CBTL. 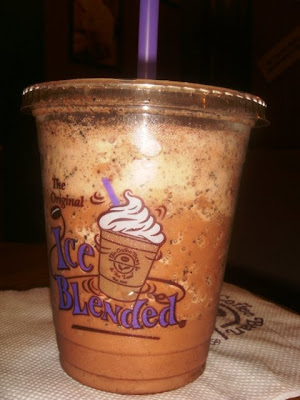 I ended the evening with a white chocolate latte which was warm, soothing and left you with a 'peaceful, easy feeling'. 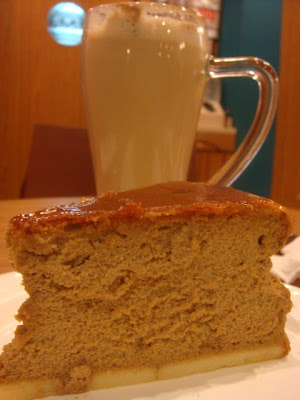 I was hosted by Darpan Mehta of CBTL. His recommendations were bang on which showed that the place is in good hands.

I went with K again this morning. Like I said before, the salmon sandwich was very good, frozen peach didn't meet her tastes though I liked it. We had cappuccinos which were at par with most good places. Nothing extraordinary. And a cheese croissant which we both loved, and had a layer of lip smacking cheese floating through the croissant.

We went there again at night to meet a friend. We lounged there for more than two hours and ordered just about everything including the pastas. K and G loved the fusilli with chicken. The tuna linguine lacked salt though and seemed vegetarian. The cheese cake was a bit dry. But the white and black mousse cake had us cooing in delight.

Two visits in a day? Looks like I like the place. What do you think? In the meanwhile we are now making plans to go there for breakfast and sample their all day breakfast.

This was not an anonymous review though I followed it with two visits as a regular paying customer.

Mermaid said…
The ambience is wonderful.I've had the salmon sandwich too(it's good) but the rest of the food is too bland for Indian palates.Veg Lasagne has no cheese and Scrambled eggs have no spices!
24 January 2010 at 10:10

Scarlett said…
I am all for any place that serves baked cheesecakes & Philly cream cheese is the best! But one of the hallmarks of a great cafe is its consistency & that's why most cafes in India can't attain the greatness, of say, a Starbucks!
25 January 2010 at 11:40

Piggy Little said…
i went to coffee bean and tea leaf after reading your review, must say, it was a wonderful place. except their non alcoholic tiramisu didnt really work that well for me, but the chocolate and white mousse cake was out of this world, had me and my friends moaning with loads in our mouths :)
3 February 2010 at 10:36

Kalyan Karmakar said…
Hey Mermaid, thanks for writing in. I and a set of pwople have gone there quite a few times. One common take out is that the service and food are a bit inconsistent.

So once I had a salmon sw with hardly any salmon. A few days later my wife went there and got lots of salmon in her sw. Once we ordered two pastas. The one in white sauce was quite tasty. The one in red sauce was too dry and bland. Out of two non review occasions, the cheesecake was brilliant once and too dry on another time. And I know a couple who really loved the place but found a hair in a sw.

Scarlett, I guess that answers your point on consistency.

Piggy Little I am not much of a tiramisu fan myself but the white and black chocolate mousse was divine. Glad you liked it too.

Try Theobroma near KFC for desserts. I have not been to the Bandra outlet yet but the brownies at the base Colaba outlet are to kill for.
3 February 2010 at 11:11