Frog out of the well ... Restoran South Pacific Seafood, Kl

on January 26, 2010
I moved into Calcutta and India when I was a chubby eight year old. The neighbourhood kids would tease my rotundness with cruelty typical of little children. One of their chants was "Raja khai Bang Bhaja". Raja is my nickname and in Bengali the taunt meant "Raja eats fried (bhaja) frogs (bang)". Well take that suckers. I did eat fried frogs. And survived.

Frogs featured prominently in my Google chats with Arindam before I landed up at their place at KL. My motto of 'only birds, mammal and Pisces' didn't cut much ice with Arindam. And I found myself at the Restoran South Pacific Seafood on my second night with Arindam and Sasha at KL. 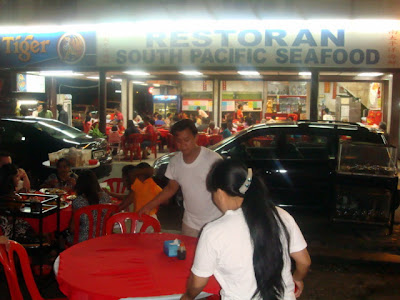 They don't mince their words at the South Pacific. The frog family is there to welcome you right when you enter. That's the moment of truth that separate the men from the boys. I am proud to say that I didn't run away. 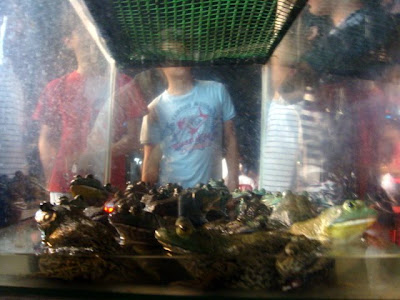 Arindam took charge of the ordering. Portion for three of everything he ordered. In excess as we always found out at the end :) Hot water asked for sterilising the cutlery. Prawns to be de-shelled. Pork to be added in mixed rice. Pork isn't mentioned on the menu of a number of places at KL so as to not offend the Malays who are Muslims. But as I said before, 'Chats knows his s%^&' (paraphrasing Bourdain on Simon Majumdar). 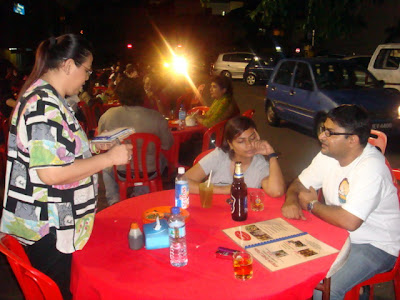 Well the frogs arrived. Didn't look anything like our green friends when served on a plate. Looked more like a plate of chilly chicken or kung pao chicken if you ask me. 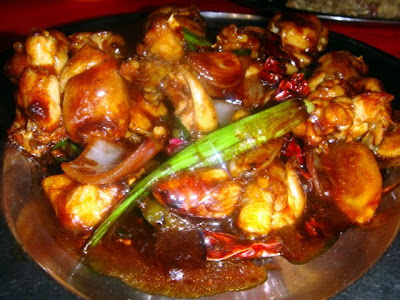 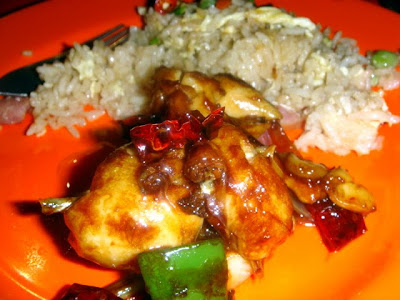 And then the Bourdain/ Majumdar moment of the trip happened. I gingerly forked a piece of frog and pop it went into my mouth. I took a bite and waited for the clouds to part and for thunder to strike me. Nothing happened though. I lived to eat another day.
"It tastes like chicken", I croaked. Yes it did. Just softer and squishier. Did I like it? Well let's put it this way, given a choice between Chicken Manchurian and Frog Manchurian, I would go for the former. Was this due to social and cultural conditioning? I don't know. I did make a second go for the frogs but didn't really dig into it with gusto. But at the end of I could proudly say that I did eat "Bang bhaja" (fried frogs). 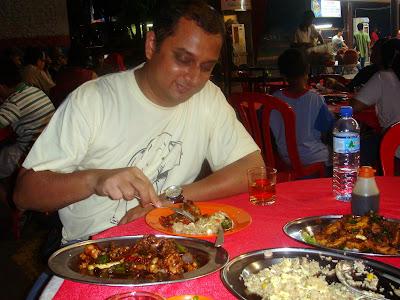 We also had some squids. Chats asked for 'spicy' and spicy it was. Given the amount of green chillies, masala and curry leaves you wouldn't be blamed for thinking that you were eating a Mangalorean preparation from Jai Hind in the middle of KL. 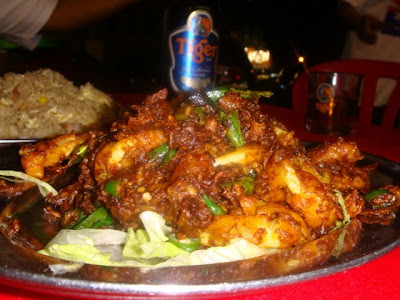 We also had a 'butter prawn'. This came in a light semolina batter. The prawns very fresh, juicy and buttery. Just what one needed after our adventures with frogs and the fire of the spicy squids. We had all of these with a fried rice which, as is the norm outside India, was flavoured in soy. The rice was on the softer side. So ended a very memorable evening at KL. In the hands of two people who really loved their adopted city. For those interested, Restoran South Pacific is in an area called P J. See that's the thing about KL. Their gems are often hidden outside the touristy Golden Triangle.
But I will be back with my multiple entry visa. I have to try the chicken fish after all. 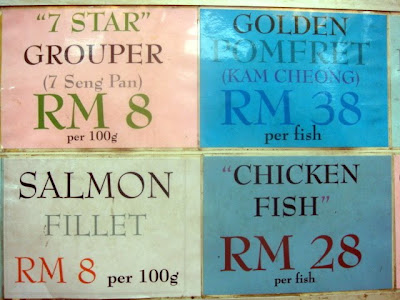 Note: My parents in law were unfazed by my frog eating stories. Apparently you used to get them in cold storages in Mumbai. They were sold in the form of frog leg lollipops and my in laws used to have them. "Tastes like chicken" was their verdict too.

Scarlett said…
Your expression digging into the frog says it all. LOL!! I must say you're very brave. The frog looks squishy! Given a choice between Chicken Manchurian & Frog Manchurian, I'd take the former too!

Ron said…
Erm. Those frogs in the box were alive? And looking? And croaking? And hopping? The other day I saw this chappie on Travel and Living who went to Korea I think, and had this long black snake wrapped around him by a friendly snake man. Half an hour later, that very snake was served to him in the form of snake soup. Which he ate. You are as brave as he was. *shudder*
27 January 2010 at 15:05

Kalyan Karmakar said…
Harman, no frogs on Indian restaurant buffets. Duck meat is great though. You should try it.

Scarlett: I think I'd go for the chicken feet. If manicured