I now pronounce you meat and pasta 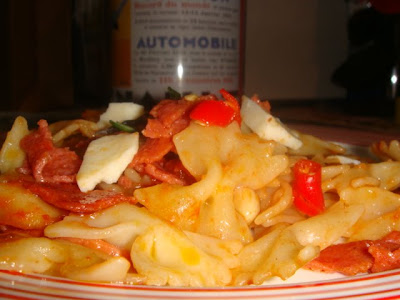 I don't believe in recipes. I don't think that great dishes can come out of blindly following recipes. Dishes which cry out your name. Dishes that linger in your mind long after the last bite. You can follow the rules but you can't predict how a dish will turn out. Recipes can guide but should not define. The joy of cooking lies in spontaneity. In discoveries which you make on the way. In the changes that happen as you get to know your ingredients better. As you learn to enjoy each moment in the kitchen and move onto the next. You have to get under the skin of your ingredients, your cooking knives, your condiments and your sauces. You have to understand them. Appreciate them. Give in to them at times. There would be the occasional burnt daal on the way. The odd uncooked vindaloo. Over salted mashed potatoes. Or soggy noodles. But then, who said that every dish has to be perfect? It doesn't have to be. It has to be you. Out of great chaos come harmony. In food. In relations. In life.
I wanted to make a creamy pasta for Kainaz on Friday. But I was dead beat after a day of irritants and disappointments. I didn't want to cook. But needed good food. Amore and Kakori House came to the rescue.
I then slept though large parts of Saturday to prime myself to cook K's pasta.
I remembered her mentioning 'bow pasta' last time. I picked up some farafelle from Sante at Pali Market, Bandra. 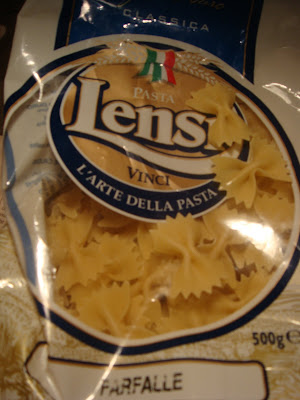 Then, on a whim, I bought 'Hungarian salami' (Rs 150/ 3 USD for 100 g) instead of chicken sausages. The meat turned out to be sharp, slightly sour, slightly salty ... reminiscent of peperoni and Portuguese chorizo. 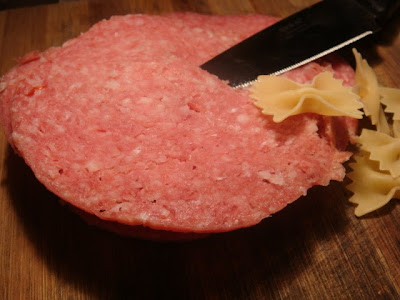 I decided to make the meat the hero of the dish. I thought of a mild cheese sauce which wouldn't overpower the taste of the meat. I planned to season it with rosemary which was at home.
I opened the fridge and saw half a packet of tomato puree. That's when I decided to shift from a cream sauce to a tomato sauce. Like a good housewife I didn't want the puree to go waste. I also wanted to see how my tomato sauce would turn out without champagne! I had more a paste or thick sauce in mind. Not a milky or soupy sauce.
So here's how the marriage of meat and pasta came about. Yes, a recipe :) 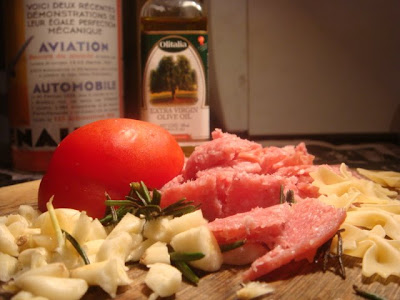 I heated two tablespoons of olive oil in a non stick pan. I then added a tablespoon of finely chopped garlic cloves to this and waited till the garlic became golden and gave out a lovely aroma. Next went in half a finely chopped tomato which was lying in the fridge.
I added 100 g of finely chopped Hungarian salami once the tomato began to soften. I let this cook till a bit of oil began to come out. I then added the tomato puree (100 ml). No champagne or corn flour this time. I stirred this for a while till the puree looked bright and red and cooked. 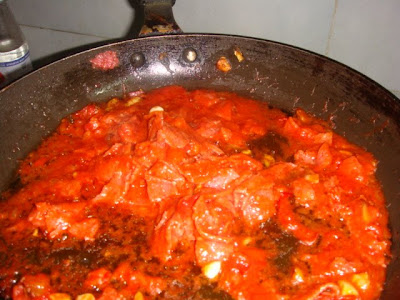 I added 250 g of boiled pasta. Last time K said that she felt that there was never enough pasta. This quietened her. It fed us both and fed us well unlike my usual 200 g.
I gently stirred the pasta and added a tablespoon of salt, half a teaspoon of sugar (not required if you use ketchup instead of puree) and a tablespoon of fresh rosemary.
I let this cook for about ten minutes as I took pictures. This led to the occasional unintended but nice crunchy bite of pasta.
I garnished the dish with two finely chopped chillies and a cube of finely chopped Amul cheese. A very mild cheese. The idea was to ensure that the cheese didn't interfere with the meat. As K said, it didn't. 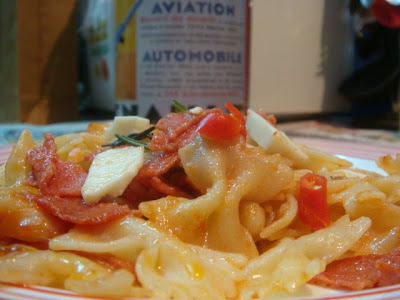 The result was a nice dryish pasta with a spring in its bite. The Olive Oil spoke of sunny Sicily. The rich red meat of the cold of Northern Italy. The green chilly of the Bengali chef.
As good a marriage as any.
Conti Recipes

Home Cooked Oriya Food said…
looks so wonderful. Well I need to follow a recipe - at least have a basic one before I can tweak it to make it easier. But you are a pro - see what a wonderful creation!
10 January 2010 at 07:18

Ruth said…
I agree with you on that - but the way I do it is to follow a recipe to the T the first time round. That way I figure out what the writer had in mind. The second time, I personalize it and make it the way I want.
10 January 2010 at 10:52

Bong Mom said…
I kind of agree with you. If I am not making anything traditional, I itch to tweak and do so very often.
The pasta sounds great
10 January 2010 at 11:17

Gia Fernandes said…
Believe it or not, this is exactly how I make and like my pasta! With cold cuts, a subtly herbed tomato-garlic sauce, and cheese that you can bite into at unexpected moments. And salami is my all-time favourite :-) Haven't made it in ages now. Definitely one of my guilty pleasures!
And on that note, I am off to make some khichdi for lunch. I could write a book on abstinence!
10 January 2010 at 11:44

Ushnish Ghosh said…
Dear kalyan
Great pasta!!!
You are right, if you innovate dish every day we eat 1000s of new dishes all our life..thats what I do except when I am in Chef mode, where I need to reproduce exact taste of a dish which was cooked for some one decade back and I am asked to make the same dish.
Reproduction of exact taste is the job of a Chef of eateries, else he loses his job...for us a new dish a day keeps the chef in us away...
I will be off blog due to some engagement at home and will be back again
Have a nice week ahead
10 January 2010 at 13:35

Actually you are right. One important corollary is that you do need a recipe if you want to make an existing dish. Still I prefer to internalise it and not refer to it when I start cooking. The recent rezala was an example of that. I guess the same argument of 3 Idiots versus learning by rote or mukosto bidya as they say in Bengali.

I must say that I would refer to recipes a lot when I began cooking. There's nothing wrong in that. I began to discard them when the food began to talk to me. Just as chocolate and alcohol does to my friend M who does wonderful stuff with them.

Ushnishda, hope to see you back soon.

Scarlett said…
Knife! I love how you arrange your ingredients before taking pictures. Nothing short of professional photography! :P

I made the Pasta in Red Sauce for which you'd put up a recipe earlier (minus the red wine...or was it champagne?) I used freh tomato pulp but it didn't turn out good at all :( Thankfully, I had some red pasta sauce at home...a couple of spoons of which were good enough for damage control.

Kalyan Karmakar said…
hey Scarlett...thanks. We must do Flurys again with a camera. Would be interesting to click strawberry cubes with a model ;)

Tastes of Portugal said…
Very nice, gave it a try and it came out well, very tasty. Love all your pictures, gave it a great description
10 April 2010 at 09:11