on January 24, 2010
Let me tell you how my recent trip to KL came about. An observation that Singapore could be called the 'food capital of the world'. Another that KL was boring. And I had woken up the very Bengali Arindam AKA Chats in KL. His home for the last 5 years after Mumbai.

He kept telling me that he would change my view of KL. A work trip to Singapore. And then a very uncharacteristic trip to KL to stay with Arindam and his lovely wife Sasha for the weekend followed. Uncharacteristic because I stick to hotels when I travel and rarely stay with anyone in their houses. I was understandably apprehensive.

So how was the experience? Hosts who would constantly be planning about how to give me the best possible time. Hosts who would look into every little detail, from keeping bedroom slippers for me to giving me my own room to make my stay comfortable. AC and water heater switches were pointed out to me even before I sat down. And they made it a point to change the mosquito mats every night. Want to go to Ikea? No problem. They drove me there and walked me around. Want to buy supermarket stuff? No problem. With hubby working, missus took me to Watsons and Carrefour On Monday and pushed the trolleys while I raided the aisles. So what if we hadn't met before? We would chat till 5 AM every morning. Just as our energy levels dipped, out popped an amazing Mocha and Chocolate ice cream. The food was abundant, well thought out and ordered after much deliberation to ensure that I got a full range, a local flavour and a taste of the best. Well before I left they began to make plans of how I could come to visit them again. This time with Kainaz.You have heard of hosts who open their houses to guests. I met two of the best in Arindam and Sasha. 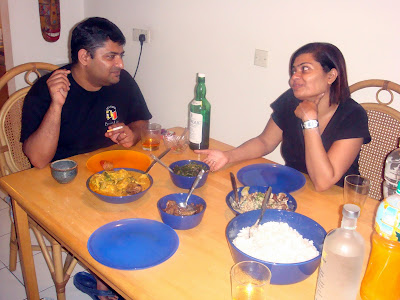 The KL versus Singapore debate? This was settled in the first night itself when we had dinner at 4.30 AM. A & S ordered from a Chinese restaurant called Lucky Garden.

The Tilapia was in a spicy coconut milk gravy which I would have never associated with the Chinese till I had this. And the gravy was well infused into the fish unlike the one at Long Beach, Singapore. I am no fan of fish and yet lapped this up in joy. 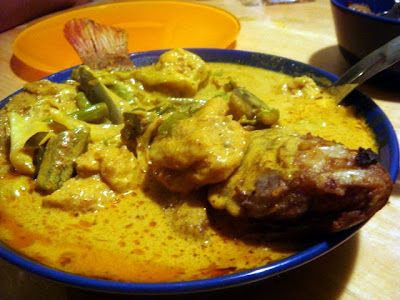 I was intrigued that Arindam had ordered greens for our weekend of flesh. But this was not fluorescent unlike the Long Beach ones and was made in shrimp paste. The crunch of green with shrimp paste was the stuff urban legends are made of. Simple and yet so unbelievably good. 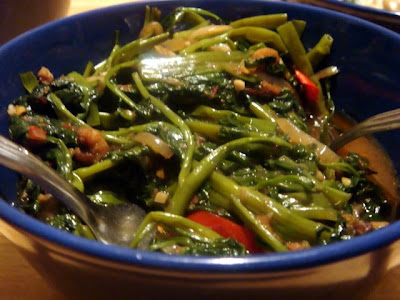 I got a bit worried when I saw a brinjal/ aubergine dish. Lessons learnt on my mother's lap about being wary of strangers burst back. Brinjal? Is this why I had crossed countries and extended my stay?
Sasha said that she never liked brinjals till she had the ones at Lucky Garden. I ate a bit and got what she meant. This dish made in a slightly sweet 'Balcha' sauce with fried onions was delectable and went very well with rice. It set the stage for the star of the evening that followed. 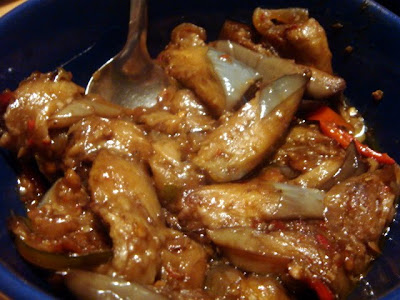 The Butter Pork was everything Arindam had promised. Unforgettable. Sinful. Orgasmic. Epic. Hit the 'sweet spot' in one bite. Crunchy bites of pork in a creamy butter sauce. Surely what Milton had in mind when he penned 'Paradise Lost'. Light years ahead of the Char Siew of Singapore's Chinatown. 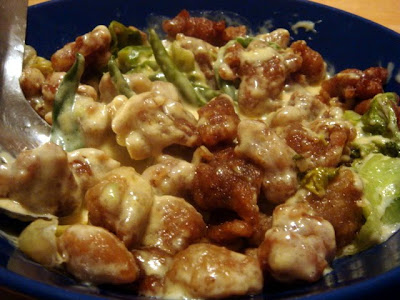 With the Satays that started the evening, the spicy Tandooori chicken tikkas that followed, the dinner I described, many equally memorable lunches and dinners packed into three days, Arindam and Sasha proved well beyond doubt that the food scene in KL rocks when compared to Singapore.
Especially if you happen to know this wonderful couple.
Note: Keep your eyes open for lots more from KL over the next few days.
Faraway foods KL live Oriental Oriental Express 2010 Live People

Gia Fernandes said…
Awesome hosts are always hosted by awesome people! You deserve it.
24 January 2010 at 12:42

Kaushik said…
Fuck! You guys are having a riot I see... but the Butter Pork is definitely a short-lived sight worth exchanging your INR for the Ringit :-) Enjoy!
7 July 2010 at 22:13