on February 17, 2010
2010 has been a good year for eating out so far ... Mumbai, Kl, Singapore, Goa. Yet there are very few meals which have made me stop and take a double take like this one did. Very few whose tastes have lingered on well after the meal was over. I am talking of our recent dinner at Del Italia. I am running out of Italian to describe how supremely floored I was.

Del Italia opposite Juhu Chowpatty has been on our list for quite a while. But we rarely go north of Bandra to eat. This is now going to change.

Everything about Del Italia was very tasteful and genteel. Right from the high white walls outside. To the big glass window looking onto the crowded beach. To the hanging plants tastefully strewn all over. To the low couches. To the orange walls in the inner section with old Italian ads decorating them. To the huge oval dressing mirror in the washroom. To even the tasteful calligraphy in the menu card. And I have not even started on the food. 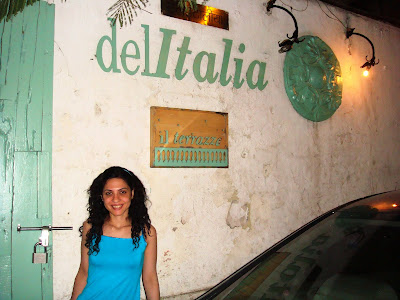 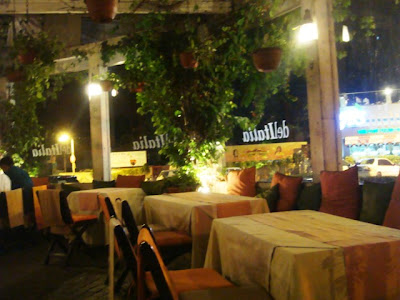 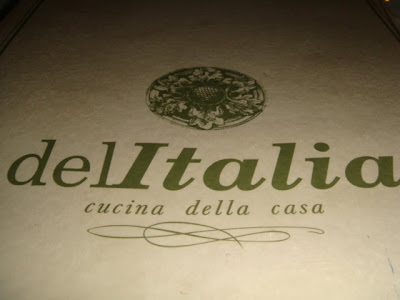 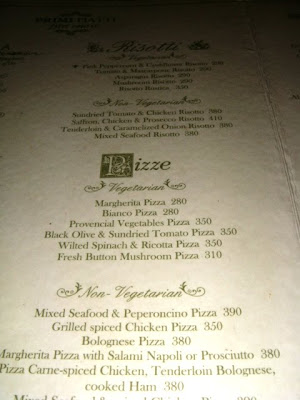 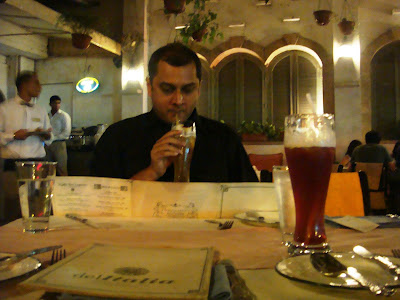 They forgot to get us the wine list and I thought it was a dry place. Anyway I was driving and couldn't have sipped on the Martinis which were on offer. We had ice teas. I had an apple one which was just the right mix of sweet and sour. Loved the touch of fresh sliced apples in the glass. Just what Eve would have used to snare Adam. 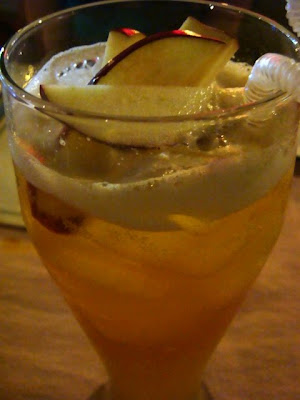 We had bacon wrapped quails as a starter. I suspect that Michelangelo designed the dish himself. The bacon was succulent. Far from the tight, salty and crisp bacon which is served in bacon wrapped prawn dishes elsewhere. The bacon tasted very good and was not salty at all. Meat was clearly the hero here. The slivers of quail served on the bone were endearingly tender. Very different from the tough quail meat which I once had at Mohammed Ali Road during Ramzan. The starter at Del Italia represented everything that is good about Italian cuisine. A very promising beginning. 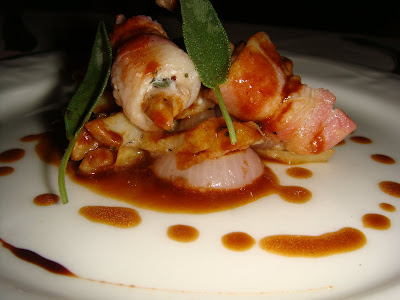 We followed this with the most expensive dish here, New Zealand Lamb Cops with Lentils (Rs 700 +/ 14 USD versus an average dish price of Rs 350/ 7 USD for the other dishes). This Mediterranean inspired dish was worth every Rupee. We asked the lamb to be medium done. The meat when it came was mind blowing. It was worth the rather long wait. It was more juicy than a Bollywood film rag. Scandalous and sinful. Each scrunchy bite left you lusting for more. The lentils which accompanied it were nice too. The lentils were slightly tangy and yet not sharp and were a nice counterpoint to the meaty bites of robust lamb. God, I have rarely come across meat so good. Meat so pure. Meat so divine. So unforgettable.

The photo below shows one third of the dish as there were three chops to a plate. These were then served to us on our plates. It was quite easy to split the third chop between us as the meat was firm yet tender. 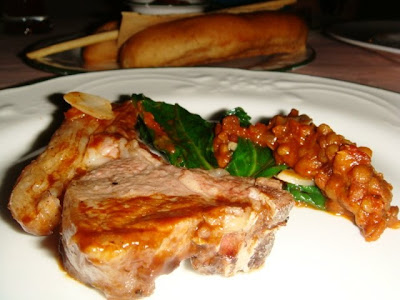 The service was friendly and informed. Any question that we asked on the menu was satisfactorily answered. And that's quite rare. One of the waiters, Anup, a fellow Bong, told me that a new menu is getting launched here. We will definitely be back.

k said…
i meant, 'Michelangelo designed the dish himself' is a killer line but servicing interrupted creative once again :)
18 February 2010 at 19:05

Ushnish Ghosh said…
Dear Kalyan
Great posting as usual to you...Must go during my visit to Mumabai some day
I am in Milano on an asignment,not on holiday I had finished all my pocket moeny , tai bhablam 2-4 $ kamie nile aro 3-4 mas BaDI basa jab-e
who is Labanya ?
I am delighted that you will call me kaku
best wishes
ghosh-kaku
18 February 2010 at 23:46

Somoo...you would have love it

K: as they say, when love and hate colide

It would be pleasure to have you over with your meye and jamai too. Labanya used to work with my wife years back.

I truly hope that you can salvage something and continue with your trip.

Ushnish Ghosh said…
Dear kalyan
The world is too small...how do you know i am labanya's father..please elaborate on my email..
I am so thrilled
love
Ghosh Kaku
19 February 2010 at 01:58

jaya said…
Little Italy has always been the family favourite for Italian food. Would like to try out food at Del Italia, provided they serve veg cuisine.
20 February 2010 at 20:17

i had these amazing peppers there as an appetizer, filled with warm, fresh mozzarella.

Am a bit surprised at your reaction to Dell Italia - have been there twice and I found the food OK at best - the only thing I really liked was the sangria Rosso (my wife and I finished a litre!) - both Little Italy and Don Giovanni are better options in Juhu and in Khar Cafe Mangii and Elbo Room do better pasta.
22 February 2010 at 11:31

Jaya... they have quite a well stocked vegetarian section

Gaurav...the description is tantalising. Must try it next time

Suman, well must say that i liked what i ate. Went to Little Italy once. I have a fundamental problem with a veg italian place as that is a force fit. I have heard good things about both Don Govani and Cafe Mangi. Plan to visit the latter. Thanks for aharing your experience though
23 February 2010 at 01:53

S said…
I would sincerely recommend Cafe Mangii...it is a really nice cozy place. And the food is amazing too. I would especially recommend the Lobster Thermidor...breathtaking! Do try it if you can.
15 March 2010 at 15:55

Another friend of mine has strongly recommended this too. The maid's not come today and I have a 15 per cent off coupon at Mangi. Time to use it?
15 March 2010 at 15:59

Another friend of mine has strongly recommended this too. The maid's not come today and I have a 15 per cent off coupon at Mangi. Time to use it?
15 March 2010 at 15:59