on February 25, 2010
This is for all of you who were bemused by my recent dosa post and status updates. I had promised you meat and meat you shall have.

I was in the middle of an existential dilemma. My recent attempt to make pasta in tomato pesto sauce was dubbed 'too dry'. Then I made a really creamy cheese pasta last night with some fairly expensive chorrizo from Sante. "Lovely sauce. Where is the meat?". Well 100 g at Rs 150 (3 USD) doesn't last long I admit.

So I picked myself up and decided to have another go at it tonight. The result was this most amazing pasta in bacon Arrabiata sauce which we just had for dinner.

Bacon's my favourite cold cut when it comes to cooking. I try to make the bacon fat the base of my bacon based dishes. I make a fantastic oil free (!) bacon hakka noodles. I substitute the oil with bacon fat. What I really love about bacon is the way its taste, flavour and aroma permeates through any dish that you put it in. Bacon has the ability to elevate the profane to the sacred by its sheer touch. I can wax eloquent about bacon till the World Wide Web runs out of Gigabytes. It's an unhealthy relation I know. I guess I have given my heart to bacon. Literally. 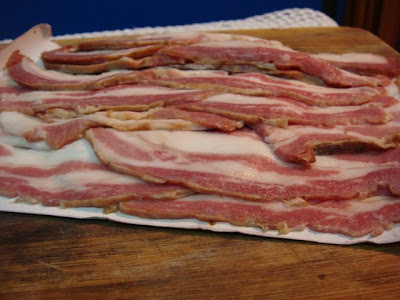 So here's how I made the dish. I heated two tablespoons of olive oil. Added 10 chopped garlic cloves to it. Garlic is key to Italian cooking from what I understand. Not a good idea to plan some French kissing after that though.

When the garlic was light brown, I added two packs (200 g) each of Dabur Homemade Tomato puree. Any less and you get 'sticky'. Not sauce.
I let this boil. Then added 200 g of finely chopped 'streaky' bacon ( a cut with streaks of fat and meat) to this and let it boil. Added a teaspoon of sugar and a table spoon of salt too. 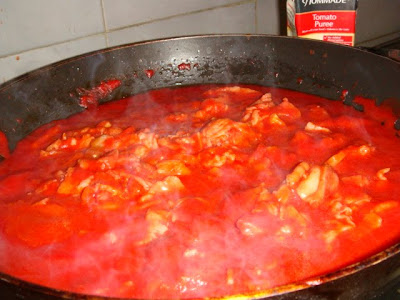 Once the sauce thickened, I added 200 g of pasta which I had earlier boiled a la dente (firm). Stirred the pasta so that the sauce spread evenly. I felt it was getting dry so added a few spoons of water. This happened for about four to five minutes.

I then added a handful of fresh finely chopped basil, my favourite herb. A bit of chopped capsicum. One slit chilly - a Karmakar family secret. And two cubes of Amul cheese, chopped into bits. I took off the pan before the cheese melted. I didn't use the more expensive cheese which was at home as I feel that the flavour of cheese often gets lost in pasta. I finished the dish by adding some black crushed pepper on top.

The result was heady. The sauce lovingly enveloped the pasta. Was a bit saucy and sharp like Scarlett O'Hara. The bacon stamped its presence. And, no ifs and buts, this time. My plan had worked! The pasta won K over. 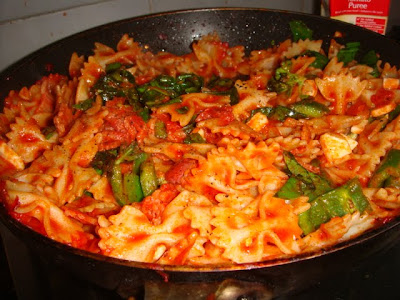 K took a few snaps of me preparing to photograph the pasta. 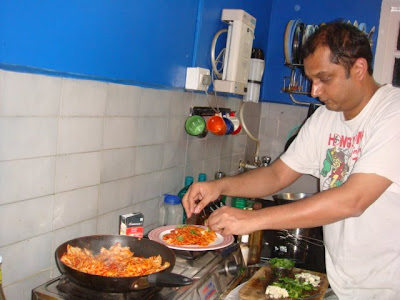 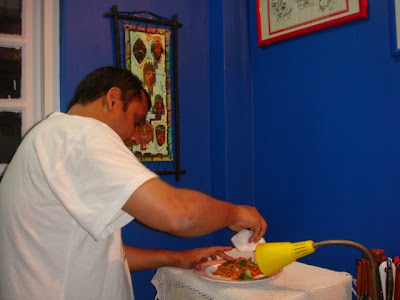 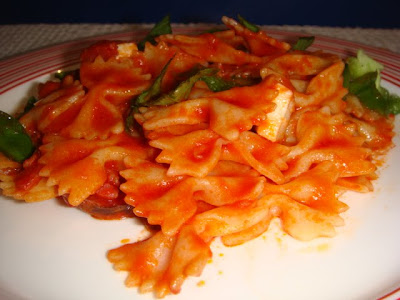 P S: Earlier in the evening Scarlett, who had recently made Arrabiata too, SMS'd me about Nigella Lawson's tip to add garlic before the oil was too hot to prevent burning. I texted her about my plans to make Arrabiata with a bacon base. She replied that it sounded interesting and wondered how it would turn out. I said, "it will turn out good". And I was right. I can say, with all humility, that food talks to me.

Zubin Wadia said…
Dood - put the bacon in a pan, no oil or butter needed, just sautee it on high heat, let the bacon shards caramelize and then pour the bits+fat into the sauce. Let me know if it upped the taste index.

Zubin, you sure know your meat. In fact that's how I make my bacon hakka. I feel that I should have added the bacon BEFORE and not after the puree. Closer to waht you suggested. Must give it another shot.

There was a lovely flavour of bacon in the kitchen when I went for a drink of water hours later
25 February 2010 at 11:50

Scarlett said…
Kalyan! Food does talk to you indeed! The pasta looks awesome...but now I'm wondering about the green chilly :P
25 February 2010 at 20:34

Unknown said…
My all time favorite is a Sunday breakfast of crispy bacon and eggs and pancakes drizzled with some fine maple syrup.

Have you posted the hakka bacon noodles recipe? I'd love to try that out. Nothing beats Canadian bacon. There is one hakka Chinese restaurant we go to here, amazing food and so close to our palate. He also plays Bollywood music. :-)
26 February 2010 at 05:06

hobbitt said…
Good photos especially the ones in which you seem to be doing some serious cooking ! Other than that a I am not qualified to comment on the food , being a total veggie by birth !
26 February 2010 at 13:20

Kalyan Karmakar said…
Supernova ... next time grab a fork and come over :)

Scarett, trst me on this. I picked this trick from K. Learnt how to make pasta from her too. The chilly doesn't change the topography of the dish. But adds a wicked zing to it

PreeOccupied...thanks. I actaully have a pork cold cuts hakka recipe up http://finelychopped-k.blogspot.com/2008/07/pigging-it-pork-hakka-noodles.html I'll put a bacon hakka one too

Hobbit: Jaya Aunty appreciate your writing in and ignoring the non veg part :) That's actually a pic of me setting up the food for the photo, in between cooking

Miri said…
Exactly my kind of pasta - lots of sauce (what will we Indians do without sauce!), cheese added at the end to give it that creaminess and tons of basil!

I haven't tried bacon in pasta at home (i look at the fat and keep the packet back!) but do this with chicken or even sausages.

One tip - I am the first one to take advantage of convenience food, but when it comes to pasta, the flavour of freshly blanched, peeled and pureed tomatoes takes the dish to the next level!
3 March 2010 at 09:41

Kalyan Karmakar said…
True Miri. Whatever little expereince that I have of true Italian cooking doesn't indicate that sauce is integral to their lives.

Chicken sausages would be good.

I have tried home made puree. Doesn't give the colour and consistency of processed ones. Might try again.
3 March 2010 at 12:24