on February 12, 2010
French food at Goa? Pshaw! A younger me would have shot down the idea of going beyond the usual Goan spicy marvels of sorpatel, vindaloo, chilly fry and ambotik. But with age comes tolerance and understanding. And a stomach bug which I carried from Mumbai. So we had to stretch the boundaries of food this time at Goa. Sprite. Not spiked. No Goan spices. Breakfasts of toast, juice and black coffee. Birthday lunch of baguettes at Lila Cafe. Hello darkness my old friend.

So where could we go for my birthday dinner? That's when I thought of Le Poisson Rouge. A French restaurant whose ads we had seen for years at Goa. K always wanted to go there. I refused every year. The time had come to eat the humble croissant.


A magical experience followed. I must thank that pesky little stomach bug which hitchhiked its way to Goa with me. Would never have come here if I didn't spend 3 to 4 am on my birthday on the 'porcelain throne'. (Manisha's term. Reader, FB friend and doc who fixed me later with her prescriptions).


A romantic open air setting. Weather just right. Far from the grimy, dusty heat of Mumbai which makes you run to the AC sections of restaurants. Tastefully laid out tables. Zillion wine glasses. So what if all I could drink was fresh lime soda? Candle lights to take up from where the 'starry, starry night' gave in. The smiles on our face said it all. 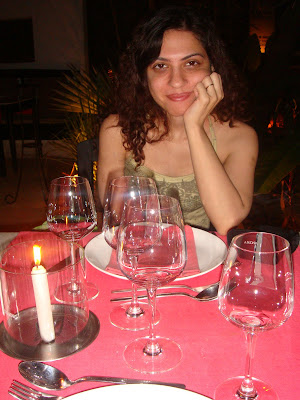 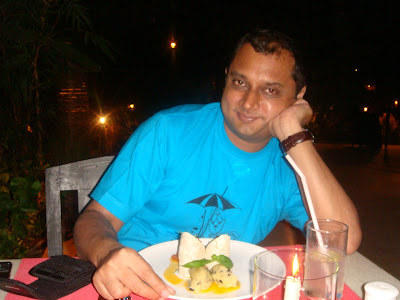 Don't go by the ghoulish, non red eye corrected look in the picture below. The waiters here, while no Billy Crystals, knew their menu unlike the waiters in posh restaurants in Mumbai. 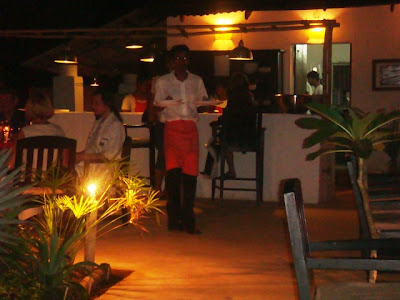 My impressions of French food were based on Bertie Wooster's description of Aunt Dahlia's chef, Anatole, and Peter Mayle's love stories on Provence. (The latter's highly recommended for those who like travel writing centred around food). Mayle left me with an impression of unrestrained hedonistic cooking built around fresh game, the reddest of meats, wine and loads of butter, cheese and bread.


The fare at Le Poisson Rouge was lighter and more delicate than what I had in mind. I wonder if it was in recognition of the warmer climes which hosted it. Or whether it represented a different region of France?


What followed was a Renaissance painter's fantasy. Dishes presented with elegance. Which tasted as if they were cooked by Celestial Virgins. Food that pampered every single taste bud and left you sobbing in joy for more.


We had a starter of baby squids stuffed with prawns. This was so light that my tender tummy forgot to worry about the crustaceans. I felt a bit like Bertie Wooster's Uncle Tom whose delicate digestion would feel buoyed only after Anatole's ministrations. 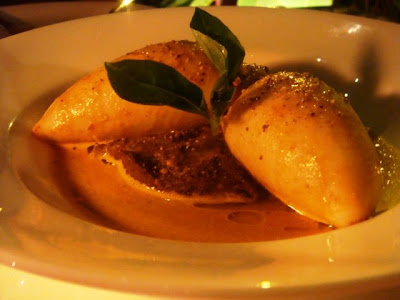 I decided to play it safe for the main course and went for the grilled chicken stuffed with Mozarella. I am not much of a chicken breast fan but this dish was delicate and yet very tasty. Just what my sore tummy needed. With the hint of uniqueness which matched up to the special occasion. And a salsa dip which lit up the dish. 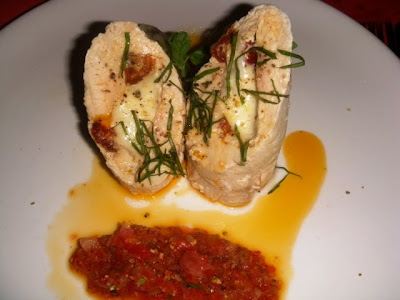 Kainaz had her eyes set on a dish which was fish stuffed with prawns spiced with local Rechado masala served with penne. I can tell you with authority that this was probably her favourite of all the birthday meals I have treated her to in the last nine years or so. 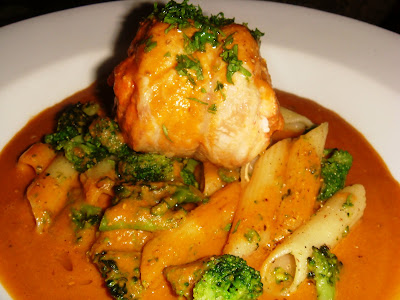 I decided to go for the kill when the time for desserts came. I ordered two instead of sharing one as we usually do. A chocolate dessert which the menu card described as firm outside and soft inside with 'Kereala cream' for K. It was so good that I dug in quite liberally.
I ordered an apple pie for myself which was very different from what one is used to. No thick Teutonic crust here. Delicately stewed fruit served on a light crust with thick cream. Aristocratic. Though honestly my heart was set on the brown Goddess. 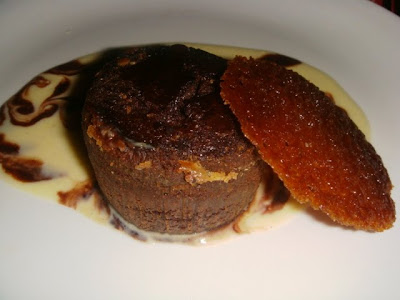 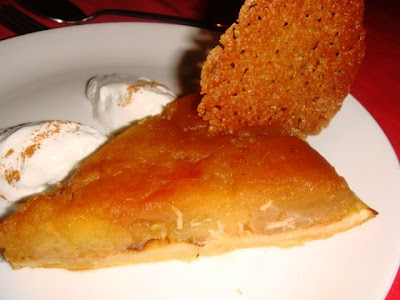 A French meal for two. Under the Goan skies. Two soft drinks. A starter. Two entrees. Two desserts. Less than fifteen hundred Rupees (USD 30). I will stand up and sing La Marseillaise to that. 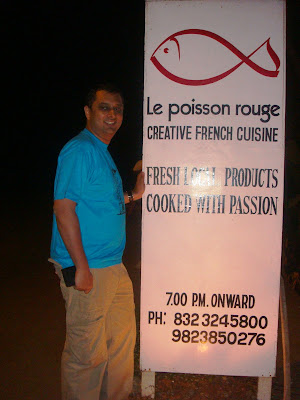 BTW is it ok, if I download two of your pics from the Fish Market post for the final round up of haat e bajar e ? Due respect to original post will be provided :)
12 February 2010 at 22:00

Kalyan Karmakar said…
Hey thanks Sandeepa. sorry didn't earlier but it's a great pleasure to be on my favourite food blog