on February 14, 2010
Caveat: Fairly long post with lots of pictures.

A prayer for the dead

We were at Leopolds on Saturday night. Shantaram's love shack. The epicentre of the 2611 killings. I felt someone walk over my grave even as I sat with K and our friends enjoying the merry evening. We heard about the dastardly terror attack at Pune's German Bakery while we were at Leos. Another hot spot in Maharashtra which was favoured by people from all over the world. Last reports said that nine were killed and over fifty three were injured. Their crime? They wanted to have a coffee and spend some quality time at the bakery. Just what we were doing hundred kilometres away at Leos. Just what some other innocent people were doing at Leos on 26th November 2008. I can write about how 'love conquers all', how 'we won't be cowed down', how 'nothing can touch the spirit of Mumbai', or 'Pune' ... but these would be empty platitudes falling hollow on the souls of those who have lost their lives. And those whose lives have been ruined forever. There can absolutely be no redemption or pardon for those who take innocent lives. One can only hope and pray that those affected get the strength to get back on their feet again. And the rest of us can only continue with our lives oblivious of Damocles's sword hanging above us.

This post is about a trip to South Bombay ... the Bombay I first fell in love with. The Bombay which was ripped apart by bullets two Novembers back. The post is dedicated to those who lost their lives in Pune. And to those whose lives were destroyed there. It looks for hope in the despair all around us.

I got a call from Soumik just as I had snuggled into a nice Saturday afternoon snooze. He was planning a trip to the Kala Ghoda Art Festival along with Rahul and Irin. KGAF was an excuse to meet up and eat. I didn't want to drive from all the way from Bandra to the other end of the world with my bad back. Rahul suggested a cab and then Soumik, our very own director saab, suggested that he and I take the local train. Inspired by Rahul Gandhi's recent train ride in Mumbai? So off we went in a surprisingly empty train from Khar (shorter ticket queue than Bandra) to Churchgate. Reached without any broken bones as the train was empty. Avoided the excruciating drive and was there in a jiffy. My first local train ride in close to five years.

The four of us were joined by Madhumita who loves food stories but is not into eating. She had a difficult time explaining the concept of detox to us that evening. K joined us from work in time for dinner. 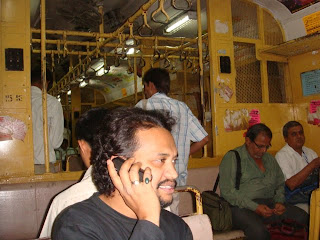 The Kala Ghoda festival was one of the first of the new festivals celebrating Mumbai. Other like Celebrate Bandra followed. KGAF is about three or four years old and happens at South Mumbai's Kala Ghoda area, close to Colaba. This is a spot most famous for a music shop called Rhythm House. It is surrounded by other famous landmarks such as the the Jehangir Art Gallery and its canteen, Samovar. Chetana, a Gujarati restaurant and the recently painted Blue Synagogue.

The fair was a riot of colours with music concerts, photo and painting displays, handicraft stalls (including a face mask shop which Irin tried but didn't quite fancy), portrait artists, tee shirt painters, shops selling saris, DVDs, strawberries drenched in chocolate and boiled corn. Yes, I admit to having a bite of the latter to kill the immediate hunger. Some local restaurants such as Joss had opened stalls and were selling food at their regular, fairly steep, prices. We skipped those. 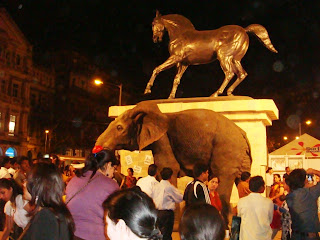 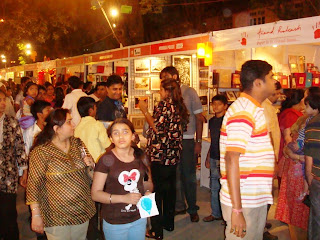 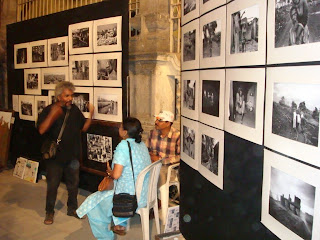 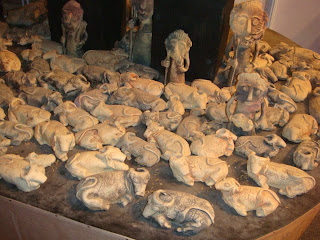 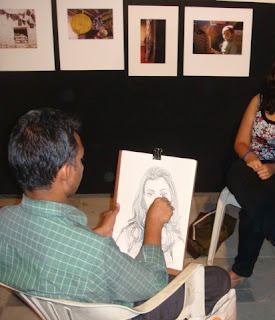 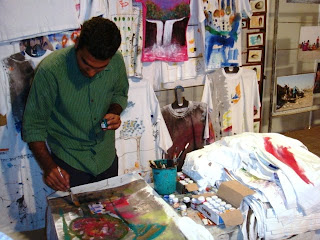 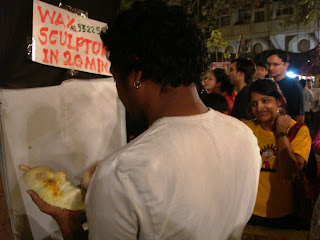 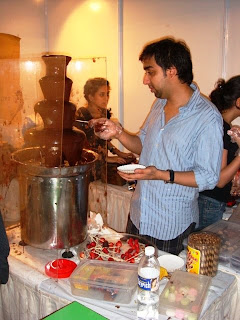 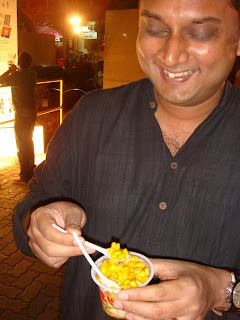 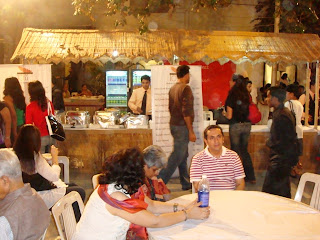 Catching up with Shantaram for a drink
We headed to Leopolds at Colaba. Unlike the empty train, Leopold was quite crowded and chaotic that Saturday night. We luckily managed to get a table and then moved to another table where we got chairs too! We got even luckier as we got a waiter to take our order. Our pitcher of beer came in an actual pitcher though and not one of those famous, tall beakers here. We were heart broken when our second waiter came and told us that beef chilly fry was over. This after the first waiter took our order for the same. Then two beef chillies mysteriously appeared. We kept grinning in joy through each excruciatingly salty bite of some very tender meat. Madhumita indulgently looked on as she sipped a juice. 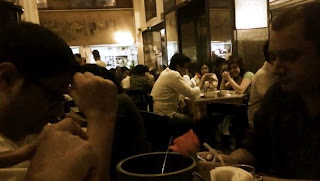 (The picture above is straight from Soumik's phone and wonderfully captures Rahul and my initial pathos at the thought of the elusive beef chilly fry). 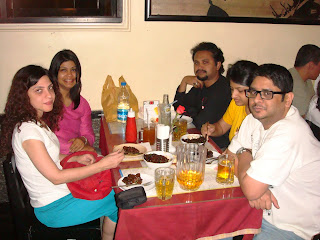 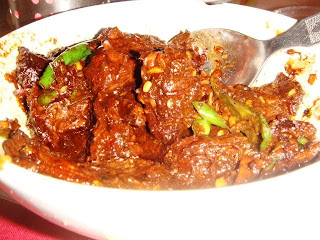 The fall of the Mesopotamian Civilisation
We then stepped out of Leopolds and went to Baghdadi. An old Muslim joint located before the famous but overrated Bade Miya and Gokul. The latter was a favourite haunt for cheap booze when I first landed in Bombay.
Baghdadi lays down the rules right in the beginning (check out the 'notice board' in the picture below). The list makes me wonder about why I thought my mom to be strict.

The seating here is very basic and borders on 'grimy' to put it politely. Simon Majumdar said in 'Eat my Globe' that street food is not always equal to 'good' food. Baghdadi proved him right.

There were just three dishes on offer at this late hour. Chicken or mutton chilly (Mughali style), masala and bhuna. We had a chicken chilly which I found to be nice and slightly sweetish... one had to try hard to ignore the muddy plate in which it was served though. Still I am partial to any dish which has fresh green chillies in it. Love the look. Even if I can't always stomach them. The mutton masala was downright bad and we left it untouched. We ordered two rotis which were really soft and quite nice. Soumik compared them to 'soft pillows'. All of this came to Rs 145 or 3 USD! 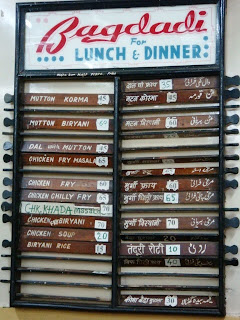 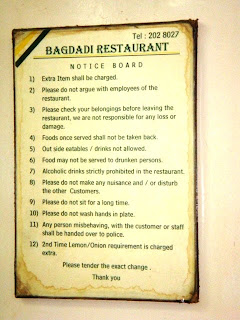 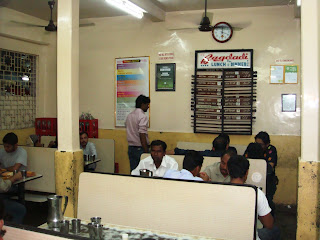 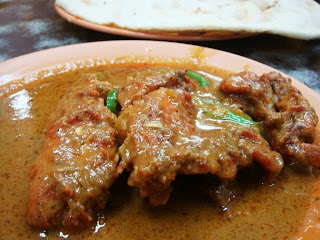 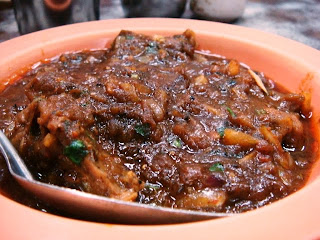 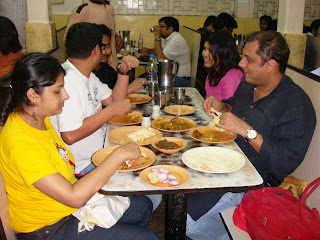 The joys of bachelorhood
Rahul and I, two venerable Bongs, knew that we needed something sweet to take the rancid tastes of Baghdadi out of our mouths. It was well past midnight and we were weighing our options. No pun intended.

For the record, the juices are terribly sweet unless you specify otherwise. Roast Cadbury ice cream is quite milky. Double chocolate ice cream is what chocolate lovers should go for. Three ice creams, a juice, a water and s and cream came to Rs 350 or 7 USD. 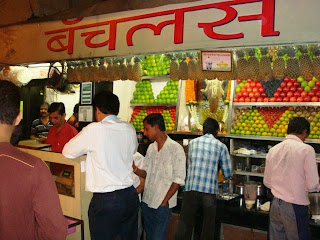 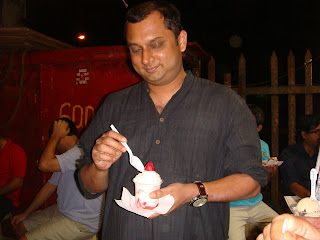 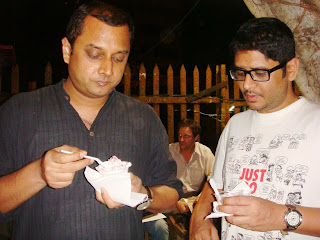 So there you have ... five Bengalis and a Parsi, one local and five out of towners ... some who loved to eat, others who indulged them ... all united in their love for South Bombay (SOBO).
desserts Indian food Mumbai highs People photo blogs South Mumbai

Kalyan Karmakar said…
This was my first time Uma and i must thank Soumik for dragging me. Hope you make it next time
15 February 2010 at 17:35

Scarlett said…
I love Leopold. They make a very nice strawberry shake with big fat chunks of strawberry floating in it. It's only available during the winters though.

Samil said…
Gokul and Baghdadi a part of everyones slumming days ooh that smell, I love the back lanes of Colaba. Thanks for bringing back the experiences. Cheers. Sam
17 February 2010 at 16:35

Kalyan Karmakar said…
Scarlett... in fact if i hadn't enticed folks with beer the entire evening would have been at Baghdadi. U must try strawberries and cream at Bachelorr's

Anonymous said…
Bagdadi rules. Unless it has changed dramatically, your imbibing at Leopolds numbed your senses.
10 January 2012 at 03:49