on March 22, 2010
The family finally met up up at the Parsi Gymkhana for dinner on Navroze on 21st evening. Parents in law, mama, masi, K and me. Reached the Gymkhana on Marine drive after a never ending drive from home, picking up the in laws on the way.

The Gymkhana consisted of a narrow club house and an open field on which the festivities happened. There was a nice tableaux inside of the Prophet and other auspicious and religious symbols. 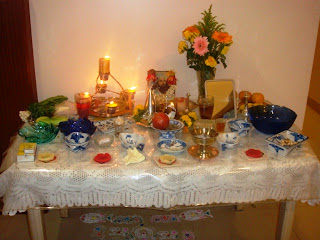 As you can see below, the lawns were packed with happy and boisterous Parsis. Not that there are any other kind. At the fag end, by the club house ,were a group of enthusiastic dancers who didn't need any cajoling to jive. There was a M C dressed in formal office wear. Typical announcements were:

"Keki where are you? Are you in the toilet?"

"The first one to come to the dance floor wins a ... " (we never got to know what as the M C was knocked down by people running on to dance)

"Since there are three winners of the guess the cake contest, one will get the cake while the other two will get five hundred Re vouchers at the Bar Night next Friday"

(Wry, timid Bengali heckler, "you mean there is some night which is not a bar night?") 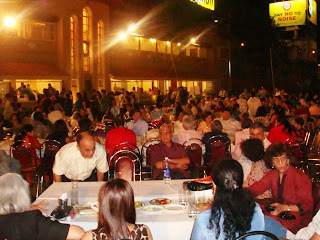 I walked towards the food counter. Was fascinated to see people frying fish at the buffet itself. Fish vindaloo, saas ni machhi, chicken farcha, cashew chicken, mutton pulao daal, faluda, muttton batiya, tawa fried rawas ... I didn't care if they didn't start the fire but this looked like one heck of a feast. 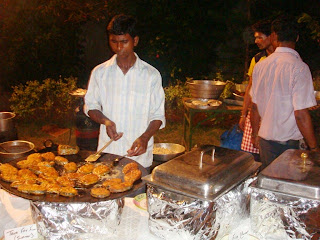 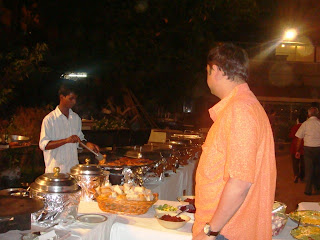 Which is when I chanced upon the caterer and head chef of the evening, in the red shirt, who seemed to have a Gordon Ramsay thing going. He snubbed a few pensioners who came for their dinner saying that dinner would be served only at 9.30 PM. "It is written in the pass", he stressed. And then he bounced on from counter to counter exhorting his team, charging them on, yelling and screaming, trying to instill a sense of the occasion. He was a man who was born to lead in the best traditions of aapro Sam Maneckshaw. 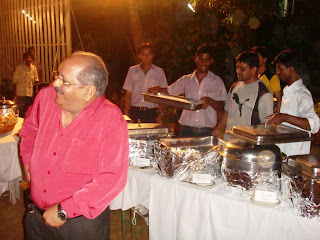 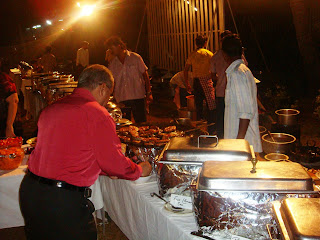 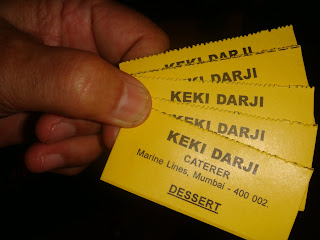 The buffet was finally declared open and hoards of festive but hungry Parsis launched on the festive feast. I knew when I was out numbered and quietly waited for my turn. "Soon it will be Durga Puja," I thought, "we'll see who is at the front of the queue of the Mughlai Paratha shop then." Evil, not too loud, laughter. 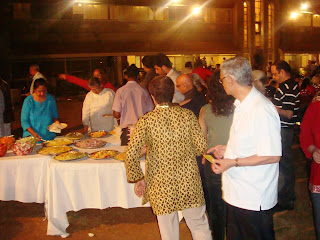 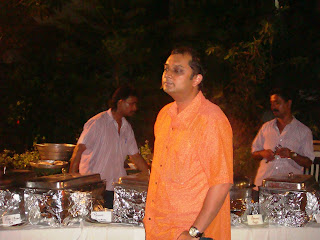 So how was the food? Vegetarian Mama (in white) went to see if there was anything for him. After all he could see fish being fried. Not potatoes or cheese. Turned out he had the last laugh. He was the only one in the group who really enjoyed his food. A rare occurrence for a vegetarian in a meat loving community's banquet. 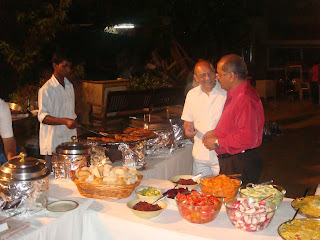 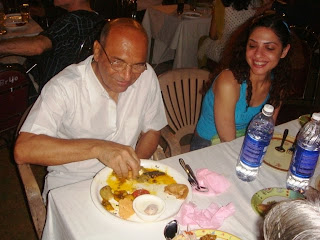 The expression on my pa in law's face showed how the rest of us felt. I felt blessed that I was too stuffed from lunch to be able to eat. 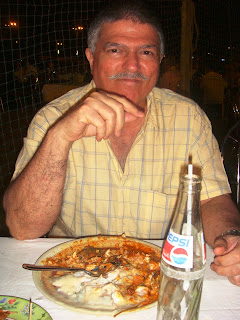 But then as I say, food is not just about food. Festive dinners are occasions for people to get together and often that's the high point. Baah, who am I kidding? We all wished the food was better. But still ... 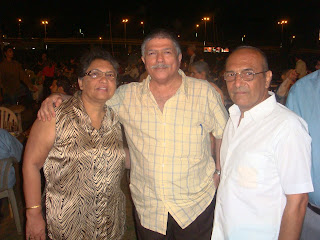 I particularly loved the picture below of Mom in Law and Mama, her elder brother, at the buffet. I wonder if they would ever have thought that they would celebrate Navroze together in faraway Mumbai, when they were growing up in Surat. 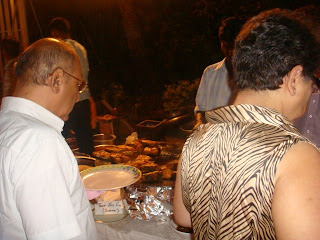 Wonder how uncle and niece celebrated Navroze a couple of decades back ... do we ever grow old enough for our family elders? 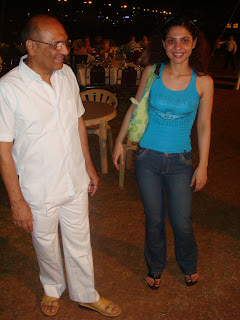 Or that one day there would be a Bengali from the East Coast at their table on Navroze? Even if he sat at an edge of the table with an escape route kept clear? 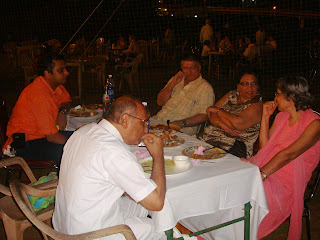 Here's a look at the food.


Starter: salty mutton samosas, prawn kebabs with a sole shrimp in each and bland potato balls. 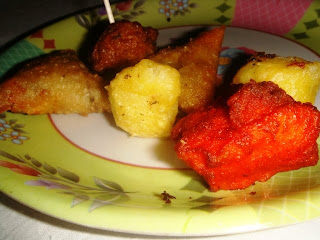 My first serving of fish was a washout. The saas ni machhi (fish in white sauce) was as limp as it looks. The fried fish was salty and rubbery too. The dal (brown liquid on rice in the photo) wasn't a patch on the afternoon's. This is the point at which my parents in law gave up on the dinner. 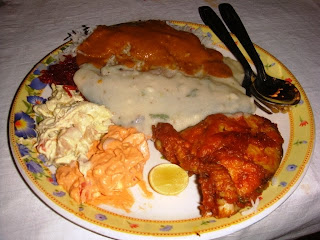 The second round of mutton batiya (brown meat curry) was slightly better. The pulao paled in comparison to lunch. The fried potatoes which we took from the cashew chicken station were cold. As was the rest of the food. Did I say that I am not too fond of buffets as a genre? 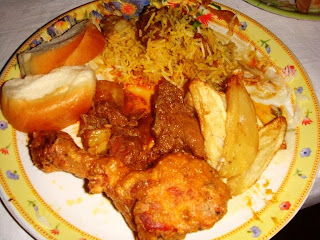 The entertainment didn't end there. We went to the dessert counter for faloodas.

There were no glasses. The crowd was getting restless. An elderly lady came timidly and 'asked for more' like Oliver Twist. She was shoo'd away by the boys at the counter till a young Bawi gave up her coupon so that this granny who had strayed by herself could get a second helping of the falooda.


Here's the gist of what I heard our caterer mutter, 'These Parsis! You can feed them all they want. One thing is late and they won't keep quiet. They don't care that the kitchen is somewhere. The place to wash is somewhere else. The boys are somewhere else ..... ".


Thankfully the blessed glasses appeared and the unappetising dessert was served to the belligerent diners. A riot was avoided. 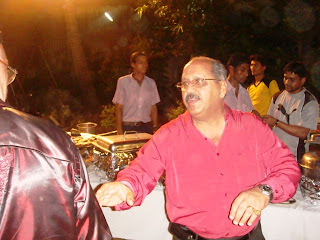 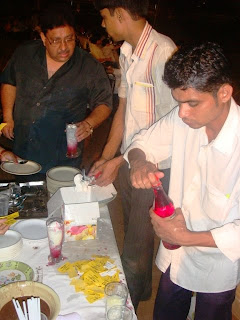 We finally drove off. Not before my mother from Calcutta admonished her thirty something son for driving 'so late at night' on phone when I called her.

So if any Parsi feels offended that I took a light hearted look at the auspicious evening then please my feeble jibe at my own kind. And once again, Navroze Mubarak.


And if the caterer wants to slap a case for libel, then the picture below announces the table I belonged too. And my response would be, "You mess with me, you mess with the family" 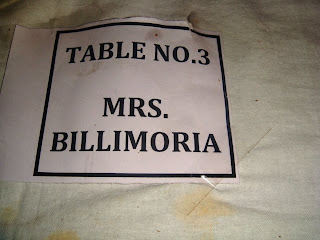 Lazy Pineapple said…
I hate buffet's too...the food goes cold and you have to stand and eat and cannot concentrate on the food.

Yes, Patrani is the flagship dish of the Parsis. Pomfret, marinated in a green coriander, chilly, grated coconut chutney, steamed in banana leaf. You will find a pic on my post on our Navroze lunch which is linked here
25 March 2010 at 15:35

Pinku said…
thats an unusually scathing post from u...I guess it had to do equally with the attitude of the caterer as it did with food.
25 March 2010 at 15:36

Kalyan Karmakar said…
Well Pinku the food was really bad. The covers were 350 per head and I felt bad to see that much money wasted. Plus lots of food was wasted too. Most plates around me were full of uneaten, congealed food. Didn't seem right.

Frankly the caterer's acerbity could be seen as eccentric. I was a bystander and wasn't affected.

Being a Bengali, one is used to rudeness in our festivities too. But still, wonder if the people celebrating could have done without the stale food and the sharp temper.

I must admit that I wasn't in a very rosy mood when I wrote this last night. Still feeling very dark and gloomy about what happened at Park Street.
25 March 2010 at 15:41

Unknown said…
Bad food and all that wasted food is a crime. Your sharp wit conveys the message and rightfully so.
26 March 2010 at 00:05

Sharmila said…
Right ... even I believe that most restaraunt buffets are to clean up their leftovers, but since the trend is catching on I have come across some nice places that actually have fresh stuff on buffets ... but only on weekends.
Your mood is evident ... but the post is good and honest. :-)
26 March 2010 at 16:46

Kalyan Karmakar said…
@Pree...the saas ni machhi had whole pomfrets in them. They were so tasteless that none of us finished them. Now pomfret is to Parsis what Hilsa is to Bengalis. I am sure that there would be many Parsis who would have loved a pomfret on their special day but couldn't afford it. Criminal.

@Sharmila...yes, am in a dark phase :( I uploaded the pics before Stephen Court. Wrote the post after that.