Jamshedi Navroze Mubarak to all Parsis, Iranis and other fellow food devotees

on March 21, 2010
Today is Navroze. The festival marks the beginning of Spring. Originated in Central Asia. In India it is celebrated by the Parsis and Iranis who follow the Zoroastrian faith.

I am a Bengali fortunate enough to be married to a Parsi. I wholeheartedly join in in celebrating Navroze with my 'family of procreation' as we used to call it in Sociology. And why not? Food forms the biggest part of the celebrations of this good natured, fun loving race which loves to eat, is obsessed by automobiles and has built some of the biggest business empires in India.

But enough of generalisations. Here's how the celebrations look so far. My in laws organised 'dabbas' or packed lunches from Farohar Caterers in Godrej Baug.

What you see below is a sample of the spread. These are portions I took out for the pictures. The actual food is a lot more and will serve us for lunch and dinner tomorrow. 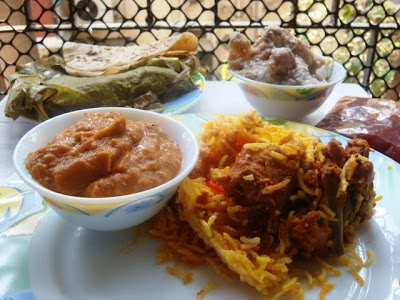 For starters, we have the intriguingly named, 'Russian Pattice'. Mashed potato shell stuffed with cheese, garlic bits and chicken, dressed in semolina and deep fried. K has already finished hers. A mark of a good pattice is when the person who really knows her stuff wallops it off in a bite. And looks suggestively at the remaining one. For the records, I did share the rest of my pattice with her. 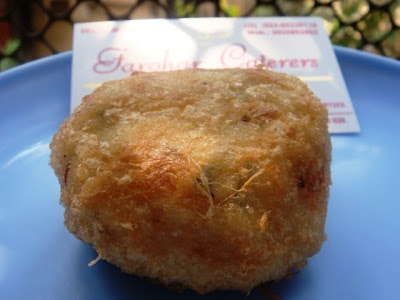 Then there is 'white mutton'. The name's possibly inspired by the left brained Thai who thought up of names 'red', 'green' and 'yellow' curry. The dish captures the identity and history of Parsis so well. The mutton symbolises their love for red meat. The grated coconut, the influence of the West Coast of India where they settled. And the crushed nuts, the arid lands of Iran which they fled from due to religious persecution centuries back. We have saved this for tomorrow's dinner. 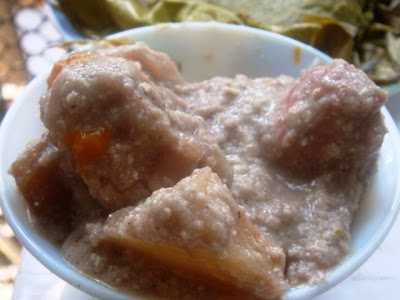 No Parsi celebration is complete without Patrani Machhi. Pomfret (chamna as they call it it), marinated in a coriander, green chilly and grated coconut chutney, wrapped in a banana leaf and steamed. The subject of discussion for many an evening after the feast is over. The fish in question was very fresh and had a nice bite to it. The masala was well balanced too. One of the best Patranis that I have had. 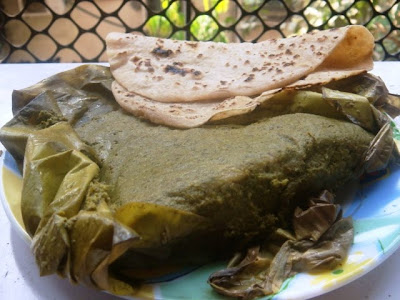 And here's what gets the Bengali son in law drooling. Pulao daal. Lovely, fine grains of Basmati, a strong, but not overpowering masala paste and meat. Had with daal (lentils). A rather quaint combination. But then who's complaining? The pulao rice here was an Emperor's treat which Old Darius would have approved of. The mutton succulent. The potato divine. The daal was the clincher. I am not the sort of person who scrapes off the daal from the bottom of the dish. That's normally reserved for cheese in pastas. Today, I fingered out and had the remaining daal from the dish we heated it in. That's how good it was.

As I keep stressing, dhansak, the most famous Parsi dish is not served on happy occasions. This Sunday meal is actually served during funerals. It is the same daal as what you see in the picture. With the meat cooked with the daal in Dhansak and not served separately in the rice as it is in pulao daal. And you have a simple 'brown' rice caramelised with fried onions unlike the fancy biriyani like pulao in the picture below. 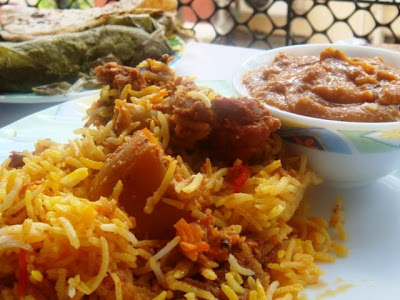 We join the rest of the gang - parents in law, mama and masi - for a seafood dinner at the Parsi Gymkhana later at night. My only hope is Green Tea. Wish me luck and hope that I can make some space for that.

The food was ordered from Farohar Caterers. And here as my Mom in Law promised them, is their phone numbers: 022 65226118 and 9920862862. I would love to clear the air here. This is not a paid review. We have not got a discount. But no good has come to any man, in any culture, in any religion, in any nation, by saying no to his mother in law. Plus she did treat us to this feast. My understanding is that all the food cost about Rs 400 (8 USD) and, as I said, lasted the two of us over two meals. 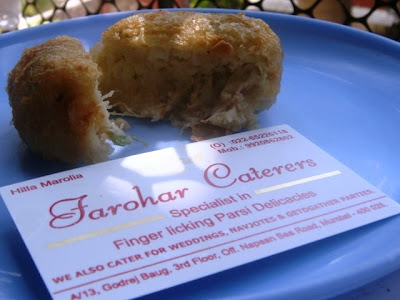 Check this article on Parsi Khabar to know more about the festival of Navroze.
festival food Mumbai highs Parsi food - the better half

pravin nair said…
Hi Kalyan,
I have been following you( your blog I mean :)) for quite sometime now & am entranced by your experiments with food & the pleasures of food;you capture them so beautifully with in your words.
N thanks to you & your mom-in law for the numbers.Great help there!
21 March 2010 at 19:50

Zubin Wadia said…
Happy Navroz to you and Kainaz! - A jealous Zoroastrian in New York! Have a wonderful year ahead!
22 March 2010 at 04:21

Scarlett said…
I told a friend of mine about your blog. She loves Parsi food & got really excited when she heard you're married to a Parsi b/c she thought your blog will have Parsi recipes as well. Can't tell you how disappointed she was when I told her you didn't put up Parsi recipes. Wouldn't you love to have more fans? LOL

Miri said…
Navroze Mubarak! What a lovely spread - while we went through some tough times at home with my mother in hospital when I was a child, I distinctly remember our kindly neighbours (Parsis as we many others since we lived in the staff quarters of a Tata group company) arranged a dabba for our daily dinner. The food was amazing and the dal was one of my favs too!
22 March 2010 at 13:55

@Pravin, thanks so much. Appreciate your writing in

@Simplist, Navroze mubarak... may you soon find your way to a Patrani

@Scarlett: Would love to but K is not the one who wears an apron in our kitchen

@Miri...I can so get what you mean...kind, sharing seeems to go with most Parsis I know. For example, there was a colleague of mine called Daisy who lived at Bandra whn I'd just moved in. I was returning from the gym, saw she was at home and rung the bell to say hi. She asked me to join her husband and grandpa in law for a dinner of pork curry and trotters... manna for a hungry PGite living in a vegetarian house
23 March 2010 at 00:04

thats such an awesome spread!!!

U really married K for love didnt you?

Anonymous said…
Hi...
Happy Nauroze.I'm a regular reader of your posts, and I have to say this Parsi spread that you guys relished has me salivating...
I would like to know what the rice thingie is called...it sort of looks like a biryani, but I don't think so...is it a Qubooli?Can you please tell me?
And then, of course, you can share d recipe...Hihihi...would love to see your version of it....
Regards,
Amarnath.
24 March 2010 at 10:39

Thank for dropping by. I must confess that I don't any Parsi recipes. My wife doesn't cook any and she is not as fond of it as I am of Bengali food. Mrs Hilla of Farohan caterers would be more than happy to deliver though.

The rice is 'pulao rice'. It is a sort of biriyani with meat, potatoes and occasionally boiled egg in it. Pulaos vary in terms of the amount of masala, and dryness of the same, in them. This is served with dhansak daal which is a mix of a number of pulses and vegetables.

'Dhansak', on the other hand, has meat IN the daal. It is served with rice, sans meat, browned with caramelised onion.