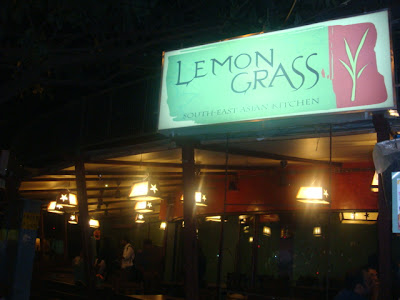 
We were in some need of cheering up. There was green moong dal and alu sabzi at home. But I felt like a nice dinner out to fix us up. So I suggested going to Lemon Grass which has come up in place of Pot Pourri at Turner Road.

We went there and saw the familiar face of the waiters from L G's continental ancestor, Pot Pourri. Some of the old dark wood tables and chairs were the same too. There were a few statues of the Buddha thrown in, acknowledging the new order. A new A C section which was a welcome relief from the heat and dust of Turner Road which the outdoor section was exposed to. The first edition of Lemon Grass used to be where Gloria Jean's Coffee is now. 2003 I think. That had a little pebbled section in between the tables. Used to have a long queue of guests waiting in those days. 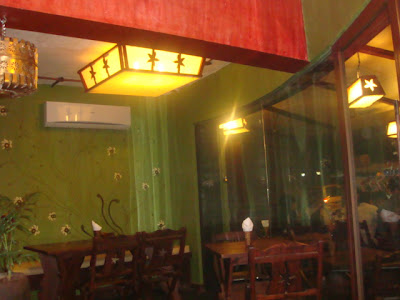 We took refuge under the aircon and ordered. The comedy of errors started.
We ordered a prawn satay with spring onions and chilly oil. What was brought to our table was pretty scary. It was a paneer and corn satay. We pointed out the mistake. The absconding prawns were found and brought to us. We took the first bite. Heaven. Unbelievably juicy and tender and very well flavoured. Kainaz immediately said that we should order one more plate. I agreed. This has rarely happened. I can't remember the last time when we had a dish and liked it so much that we immediately called for more. 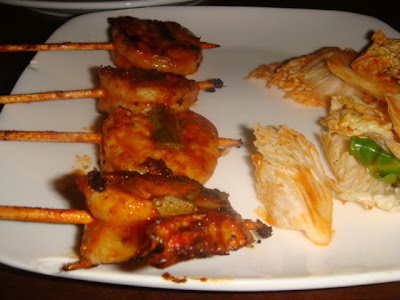 While we waited for our order of round two, the Thai Green Curry that we earlier ordered came. Except it was Red! Off went the waiter, more used to the pennes and pestos and Parmesans of Pot Pourri, to search for this alien thing called 'Green Curry'.
As the Mad Hatter's party continued I tried to get myself a fish oil and green chilly dip.
'Could I have green chillies in fish oil?'
'Ok Sir'.
(nothing further)
'What happened?'
'No fish oil sir'
'Green chilly in vinegar then?'
A red chilly sauce landed up on my table. I caught hold of another of the old waiters, the guy with the walrus moustache, and then got my green chillies. Can't have Thai curries without them can we?
Round two of prawns came. Very good once again.. And then came the green curry. K who had it without rice liked it a lot. I was fine with it. Needed to add a bit more salt to it than I cared for. And what's with the carrots and stuff? 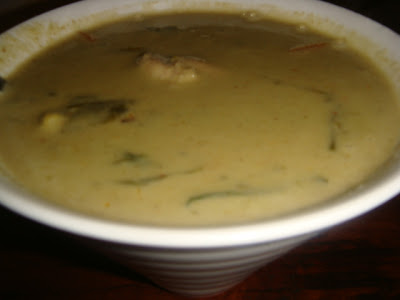 We were not entirely full and I thought of ordering a beef Mussaman curry usually referred to as 'yellow curry'. Had a long discussion with the walrus mousched waiter who decided to take over our table from the two earlier guys. This gentleman, used to serving German sausages, was confused when I asked for yellow curry. 'Orange' he finally concluded and proceeded to the kitchen.

He came back in a couple of minutes. "Kitchen is closed sir".
11.15 PM at 'happening' Bandra. Even my kitchen at home doesn't close so early!
And then he went onto a long monologue about how the cooks had come from outside, were working continuously for twenty three days and needed a break. He continued his heartfelt apology while our food grew cold.

What followed was out of those poverty scenes in films like Deewar, Children of heaven, The Bicycle Thief and How Green Was My Valley. K and I tried to stretch that one bowl of green curry that had been rationed to us. And she without rice, remember? There was a bit of curry left which she passed on to me. I took a spoonful and gave her the remaining spoonful. Then we looked outside at a child and two ladies who were eating and hadn't finished their portions. I could see us as characters in a Hindi Art film of the eighties. Om Puri and Smita Patil could have played K and me longingly looking at wasted the food at the other table. As K put it, we had appetites, we had money... we had no food. The dinner ended with me finishing off the peanut sauce dip which was on the table. Before we could ask for the bill, our friend, the walrus guy, said, "sorry sir, no desserts today". I guess this was a dinner which came with a diet plan.

We strolled back home with a lesson on the need to count our blessings. Reminded me of a prayer that I once heard:
"Some have meat but can't eat
Some can eat but don't have meat
We have both so thank you God.
Amen" 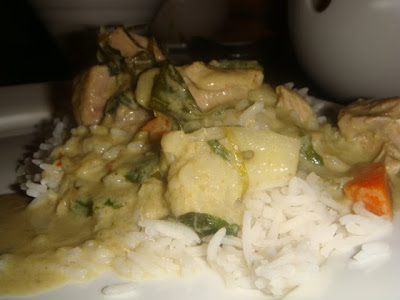 Kalyan Karmakar said…
Sharmila, must say that a lot of it was inspired by the conversation between K and me.

Should have heeded your advice against eating out on weekdays :(

Anonymous said…
hahah Hilarious!! Good stuff but then my question is, dont restaurants usually warn you saying...we are taking the last order now..the kitchen will close in 15 mins...that kind of a thing? I am surprised they did not bother to do so...

Miri said…
Pot Pourri closed ?!! :( I have some wonderful memories of that place - for 3 years circa 1996, I shared a flat on TPS 1V, paralled to Turner road with 3 other girls and we had so many lovely meals there. Just used to stroll down and then finish off with a kulfi from the guy who used to come post 10pm outside the HSBC ATM across the road - delish!

Unbelievable that this comedy of errors still managed to produce a great meal!
13 March 2010 at 20:18

Kalyan Karmakar said…
Hey Miri, Pot Pourri's aways been a part of my life in Mumbai. Right from the time when I lived in a P G where more than twelve people shared two loos near Bandra Talao (97 onwards) to our rented place close to P P now. I guess it is a happy place and that is why one had a great mealt despite all the madness.

The koolfi guy is still there. And in case you are interested, I once saw Milind Soam in front of me at the HSBC ATM which used to be there.
14 March 2010 at 01:30