on March 07, 2010
What do you say about a meal which includes pork, prawns and chicken, and where the most memorable part was the Ice Tea. 'So long Erich Segal'?

We stepped into TGIF for lunch on Friday (!) at Palladium. This is the new upmarket mall at Phoenix High Street, Mumbai.

We read about the 'Jack's Tower' on the menu card - rack of pork in Jack Daniels, fried prawns, deep fried chicken - K and I looked at each other and said "groovy baby".

We started with the lowest tower. A heap of deep fried chicken. The first bite had me smiling happily. Crunch crunch zing. The second bite made me stop in my tracks. I realised that I was being forced to break my 'no desserts till Sunday' resolution, which I made on Wednesday. This was sickeningly sweet.

I could imagine Gujaratis who like a punch of sweetness in their daals and vegetables liking this. Problem is that Gujaratis don't eat meat. And we are not Gujaratis. 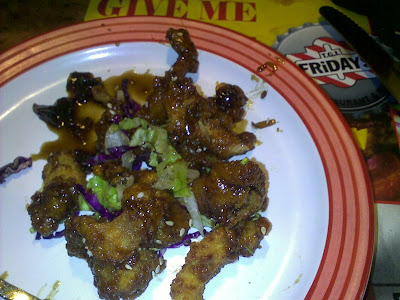 We moved to the shrimps next to give a break between the two brown dishes. The shrimps were large. Soft but not juicy. The batter was soggy. Luckily there was an underlying spiciness to it which was a relief after the saccharine sweetness of the chicken.

The prawns reminded me of characters such as Sadie Thompson in Somerset Maugham's Oriental world. Painted Caucasian women of scandal. Their sell by date long gone. Trying to hold on to their youth in a flaccid and sagging world.

Not a patch on the prawns that I had had at TGIF Gurgaon earlier. 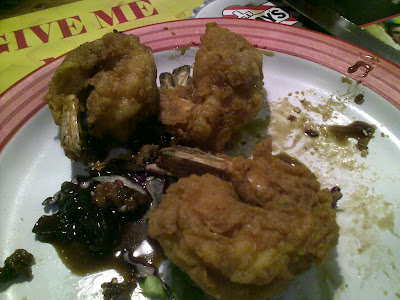 Then came the show stopper. What we were waiting for. We got the pork rack down from the tower with reverence. Took a bite. Very tender meat. Lovely layer of pliant fat. NO TASTE. No sugar. No salt. No spice. An affront to Jack. 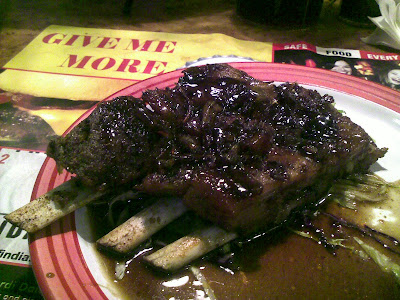 Well, what can I say? The Jack's Tower at TGIF represents everything that is wrong with the American Automotive Experience. A belief that it's all about excess instead of finesse.
A very expensive lesson learnt might I add. We were really happy when the meal got over. "Thank God its over" as K said.
Thankfully Friday Lunch was never just about the food. 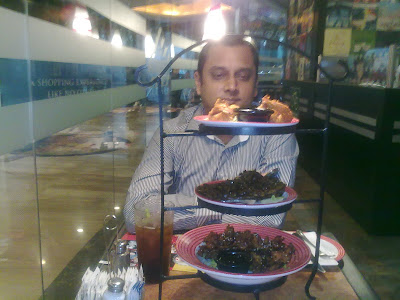 P S There were a couple of girls in the table beside us. They ordered a sausage with penne in Arabiata sauce. They kept using the word 'bad' very often as they ate it. They also ordered a peperoni pizza. The amount of condiments that they added to it didn't say good things about the pizza.

Lazy Pineapple said…
I have tried TGIF in Glasgow..and I found the food really tasty. Maybe you chose the wrong dishes...

Sharmila said…
I know what you mean ... when expectations are not met, especially when it is food. Maybe it was the weekday factor .. many places have great food on weekends and almost stale food on weekdays. My experience. :-)
7 March 2010 at 19:20

Kalyan Karmakar said…
hey L P, I must say that both my meals at TGIF Gurgaon were nice. Still wouldn't like to pick the 'wrong dish' in a thousand Rupee plus meal :(

Kalyan Karmakar said…
Hey Miri, I made a few trips to Gurgaon on work in 08. But not since the economic slowdown started.