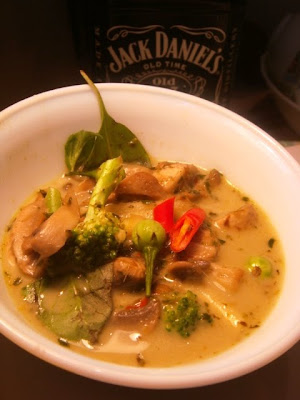 I don't hold much store for recipes when I cook. I follow my own instincts. This post is about an extreme case where I decided to make a famous dish from a faraway land. Without a recipe or without a ready made mix. The recipe I discovered in the process is at the bottom of this longish post. Scroll down if recipes are what you are here for.


I hosted a Bengali polau and kosha mangsho (mutton) party for our friends last night. Most of our friends are non vegetarians save one or two like H. We normally order Kanchipuram Idlis for him during parties which he sits quietly in a corner and eats. I once cooked a vegetarian dish for him. Some stir fry with mushrooms, bell peppers and stuff. Turned out that he liked it and he keeps raving about it even now. I love appreciation. Even from vegetarians. So I decided to make something special for H this time too. The pulao would be vegetarian of course. Harshad's quite fitness conscious so potatoes and paneer wouldn't work that well. We are talking of 'real' vegetables here. A concept which I am not well acquainted with. After much thought, I settled upon creating an oxymoron called 'Vegetarian' Green Thai curry.

'Oxymoron' because a real Thai curry should start with shrimp paste and has to be laced with fish oil from what I gather. As 'vegetarian' as a Bengali fish curry.

There were some other basic problems. I could not use the central ingredients (fish oil, shrimp paste) as we just saw. I did not have a recipe. AND I was too pig headed to look for one! I refused to buy readily available Thai curry sachets. I didn't have Palm sugar which I think is another ingredient. So the curry had everything going against it.

I was going to create this from start. And poor H would have to sink or swim with me. But the dish would be based on coconut milk and I have tremendous faith in the ability of coconut milk to make anything taste good.

I went shopping to Pali Market (Bandra) first. I knew that green curries have basil. Picked that. And a set of Thai ingredients - galangal (Thai ginger), lemon grass, bird's eye chillies and Thai baigan (brinjal) from the enterprising vegetable lady there. Not knowing much about 'healthy' vegetables, I picked up broccoli, mushrooms and baby corn. We'd never bought baby corn or broccoli before and I wondered about how to slice them for a while. Perplexing.

Folks were supposed to come at nine at night. I made the sauce base in the afternoon. In a mixer instead of a pestle. No recipe but very vague memories of TV shows. Banu chopped the mushrooms and stuff under my directions.

Kainaz and I stepped out for a coffee in the evening. The  mangsho was cooked. Pulao was half done. I came back and decided to write for a while and then hit the kitchen at 8.30 PM to finish the cooking.

The bell rang at 8 PM. Thanks to IPL and hair cuts from hot hair dressers the first guests had arrived. And some were hungry. Including another vegetarian candidate.

I shut my laptop. Headed to the kitchen leaving the guests to fend for themselves. I was a bit frazzled. There was too much happening. Not the right mood to begin a journey into the unknown. Still I set off on the green curry trail. Put the vegetables in first. Then realised that this was wrong. It was the sauce base that should be made first. A sip or two of Jack and I began to gather my wits, shoo'd everyone out and focussed on delivering the baby. I took the vegetables out of the pot, put them onto the kitchen surface, and began cooking again.

The serendipitous path to the curry was finally over. The colour of the curry was to my satisfaction. Not the florid green  of Mumbai restaurant Thai curries. It didn't have fish oil. But it had Thai brinjals, core to green curries, maddeningly absent in local restaurants.

Photographs done, I took a bowl out for poor D who was hungry and was not tended to by a rather unprepared host. Others had just trooped in and a tasting session began. I decided to take a sip of the curry too after I heard sufficient 'oohs' and 'aahs. The curry was quite authentic if one ignored the broccoli and baby corn.

The man of the moment and my muse for vegetarian cooking, Harshad, arrived. I waited while he tasted it. Didn't give him time to catch his breath. It seemed to meet his approval. I let a sigh of relief and went off to make sausage starters. I was back on familar ground. 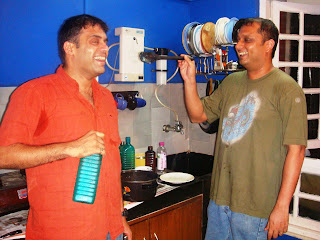 How did the Thai curry fare? The vegetarians had to fight with some sworn non vegetarians for it. As Kainaz said, we were a few spoons away from murder. And M, who is a light eater, took three helpings. H had his own dish and pulao instead of an idli.  My evening was made.

Here's the recipe. I am very proud of it. It is my baby. So what if it is vegetarian?

(The portions below are tempered down  for two to three people.) 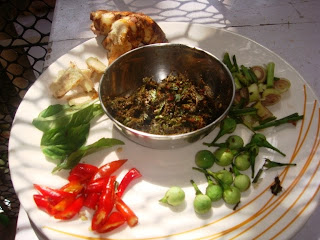 Cook:
This should ideally be served  with short grained, sticky steamed rice. Not with fried rice. AND definitely not with Bengali pulao. But hey, Whatever Works as Woody Allen says. 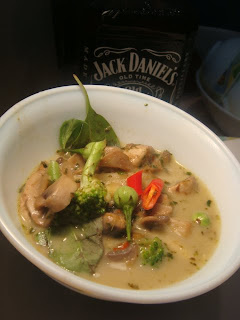 Here are some photos from last evening: 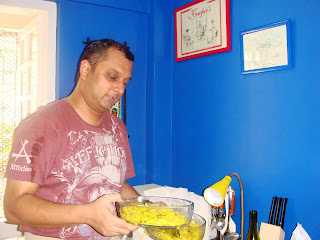 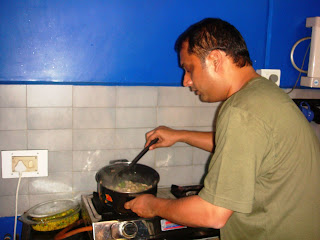 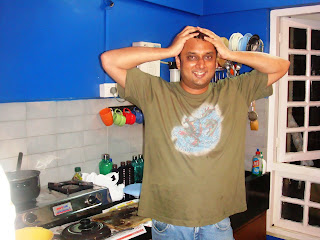 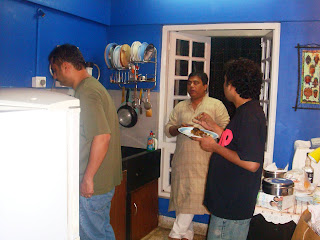 Unknown said…
Lovely lovely, so tasty and so healthy- to think of all those lovely fresh veggies stewed in and I had 3 bowlfuls of that...wow wow ...thanks Kollan, I can still taste it...
4 April 2010 at 04:15

Scarlett said…
Jesus Christ!! If you can make Thai curry without shrimp paste & fish oil, you might as well serve it with Bengali pulao instead of steamed rice :))
4 April 2010 at 13:35

Ushnish Ghosh said…
Dear Kalyan
great write as an easter treat I guess...
The dish must have been awesome.
I generally dont used shrimp paste or fish oil to cook thai dishes and the taste is real good with Ginger, lemon grass et all and ofcourse a mouth breaking " Dhani lanka paste" ..
cant wait to come to Mumbai ..may be I will straight land at your place...instead of at labanya's.
have a nice week
4 April 2010 at 18:00

Kalyan Karmakar said…
@Madhumita... that's when I knew it had worked :)

@Scarlett: I will be back

S said…
Hi...thanks for deconstructing one of my favourite dishes and making it sound so simple :) Have always wanted to make this at home, but didn't want to use the ready pre packed spice mix.

Kalyan Karmakar said…
@S, thanks. I am proud of myself :)

Ok I asked around for you. Marks cold storage at Pali Naka, Bandra has fish oil. Sante said they have 'fish sauce' which they claimed was the sauce. I assume most upper end food sections of places like Hyper City and all will have it.

Not that sure about shrimp paste though.