Do try this at home: Chicken Hakka Noodles made in India 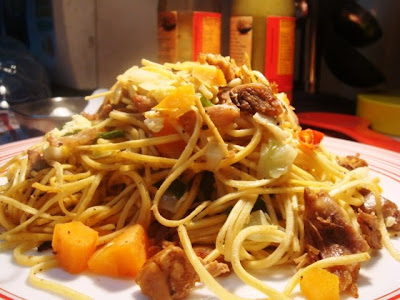 'Don't try this at home' is a book which chronicles the 'culinary catastrophes' of celeb chefs. The book is like the curate's egg. 'Good in parts'.

My recent botched attempt to make biriyani reminded me of the first time I tried to make hakka noodles. This was soon after we got married. I told K that I'd make noodles. My mom used to make it in Calcutta. I had seen her at various stages of making it and felt that I could crack it easily.

A while into the noodles and I knew that it was a 'historical blunder'. The noodles were soggy, squishy. I hoped to rescue it with lots of oil, sauce and ajino moto. But it turned from sticky to worse. I went into the next room where Kainaz was catching up with a childhood friend on the phone. One look at my face and she put the phone down and tried to calm me. The next day I went and asked a Chinese fod cart guy at Nariman Point about the secret to firm noodles. The kind guy in a loongi, was not flustered by the question from the pin striped 'saab' and helped me out.

It's been close to nine years since then. A few disasters in between. But I can confidently say that hakka noodles are my forte now. I have written about pork and bacon hakka noodles before. Well this is with chicken. The plot remains the same. A few little tricks and you can get some variations.This is a nice way of making tough, chunky cuts of chicken, which you get if you buy a big bird, palatable. We were recently stuck with some at home. 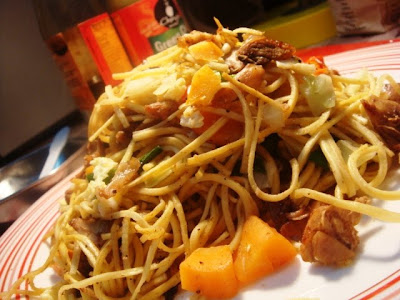 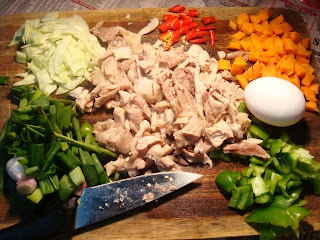 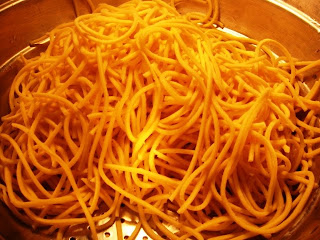 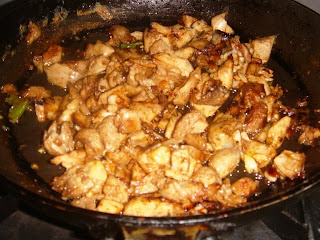 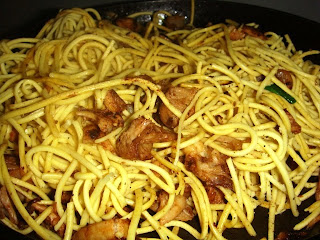 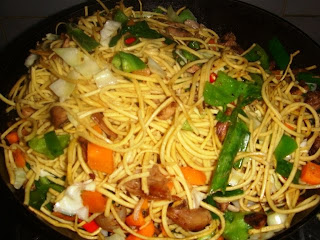 The end result is quite well flavoured and you don't need a side dish with it. 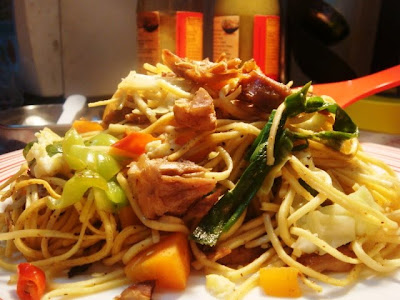 Unknown said…
K, I am making noodles too tonight, though not with chicken but just with garlic!

Your Chicken Hakka Noodle looks yummy! Try it next time with shrimp, pork and chicken. The mixed hakka is my favorite.

Do you home deliver by any chance? ;-)

Supernova said…
Ringing in the Bengali New Year with Chinese food...talk about globalisation! ;)

@Pree, I get a bit intimidated by the water that comes out when one fries prawns. Any suggestions?

@Kaus: yes, I charge in terms of a chilled beer in a Bangaluru Pub :)

@Supernova, to you too

Miri said…
Looks good - if you can churn out a decent Hakka Noodles, you are a good IMO - because there is really nothing to hide behind! Just some veggies, noodles, meat and sauce!

I havent had a problem with Chings...the local egg noodles in Delhi give me the heebie jeebies for some reason
17 April 2010 at 21:50

Ulfet Tirmizi said…
Hey! Tried this recipe and it was my first attempt at hakka noodles - and it came out perfectly! I used Chings noodles and they were perfectly fine - no clumping or mashing. Thanks!
1 November 2015 at 17:17

Kalyan Karmakar said…
so glad to hear that Ulfet. My experience with ching's hasn't been that good. maybe they have improved
2 November 2015 at 15:16