on April 09, 2010
Don't you love it when you go to a restaurant and when everyone starting from the valet parking guys to the stewards to the waiters welcome you back with huge smiles? When they recognise you and make you feel at home with their warmth? When they make you feel like you are with family?

Always happens to me at Oh Calcutta, Tardeo, even if I go there after months.

We hopped off to Oh Cal for a quick bite in between work on Friday. Oh Calcutta had been under renovation for a while. I remember sitting in what we call the 'dungeon' the last time we went there. A fairly dingy room with bright white lights in the same building as the original restaurant. The dungeon didn't have the allure and sheen of the original restaurant. K hates it I was glad to see that the work is finally over. They have maintained the same look as before. The layout is exactly the same. So I guess its a bit like doing Botox or a face lift. They must have repainted the walls and stuff. So more a restoration than redecoration. 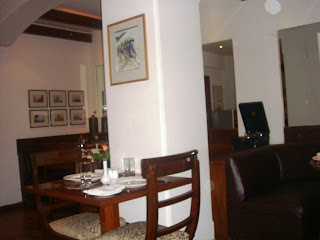 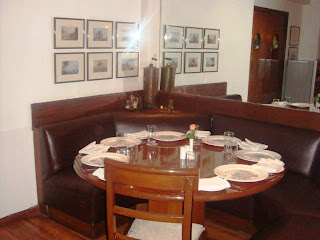 I had this tremendous urge for the past couple of days to have Didu's (my granny's) luchis after I read Pree's post on luchi and alu. Pree gave me some tips on how to make them. But frankly rotis and luchis are the last frontier for me.

So we ordered luchis (the soft Bengali puris) at Oh Calcutta. Their standards in luchis had dipped during my last two visits. I am glad to report that they are back to making stellar luchis. The luchis were huge, crisp and yet as soft as a baby's cheeks. They were almost as good as Didu's luchis and that takes a lot. They have increased the portion of luchis. They now give 6 instead of 4 in a plate. Unless Didu told them that I was coming.

My lunchmate from work, and food partner in crime, Ips pointed out that Oh Calcutta had introduced a few new items on the menu. She suggested trying them out. I normally don't even look at the menu when we order here.

We tried  a kancha lonka murgi (green chilly chicken). Oh Cal suffers from the same problem which most Indian restaurants do. They don't pay attention to the presentation of food unlike in Continental or Oriental places in the same price range. They just focus on serving damn good food!

The look of the chicken dish didn't inspire much awe when it came to our table. It looked a bit liked the moss laden ponds of Bengal. Disturbingly close to the green curries of Malwani joints in Mumbai.

I took the first bite. It was one of those moments which go down in history. Epiphany. It was one of the best tasting dishes that I have had in a long time. The dryish gravy was made from pounded green chillies, coriander leaves (cilantro) and sugar. The dish reminded you of an Uttam Suchitra film of yore. A unique mix of spice and romance. A blend that was sharp, flirtatious yet sweet and delicate. The dish was in perfect harmony with the luchis. 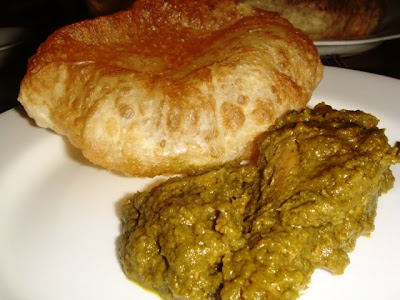 But Houston, we had a problem. Ips' chicken piece was apparently cold and not cooked properly. She pointed it out to the waiter. Four people swooped down and immediately took the offending meat away. My piece was absolutely fine. I think the chunky breast piece which Ips chose was the problem. Not done.

They got the dish back after a while. Apologising profusely. With four extra luchis! And some extra chicken. We began our culinary joyride and Ips found it easy to forgive them. 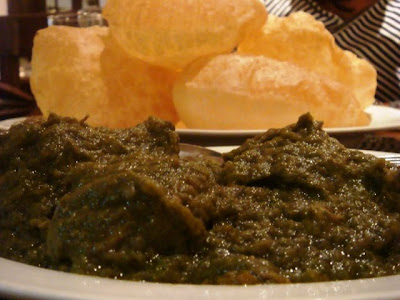 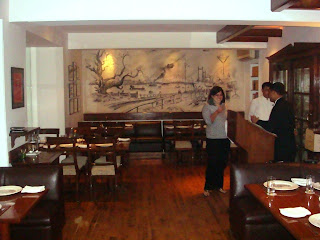 To be honest we were a bit stuffed by the time the next course, Aam Kasundi Kaakra came. This was thanks to the complimentary luchis and chicken.


The aam kashundi kaakra was an interesting innovation using traditional Bengali condiments. The crab (kaakra) was deshelled, mashed into little balls and fried. The fiery red sauce was again not very photogenic.

The dish was a complete contrast from the polite and genteel chicken that we just  had. There was nothing subtle  about the aam kasundi kaakra. It could knock you down with its pungency. The mellowness of the earlier kacha lonka chicken was history. This was a dish that would wake up the neighbours. Fiery, rebellious, passionate.

The raw mango (aam) gave it a pungent touch and Kasundi, the fiery Bengali mustard sauce, its heat. The two combined to give you a knock out punch. The initial mouthful could get bring tears of joy to your eyes. You began to enjoy the dish as you got to know it well and discovered your preferred piquant levels and tempered the same with steamed rice. This dish too had a slight sweetish after taste to it. A novel experience. A bit like having one's first Tequila shot. 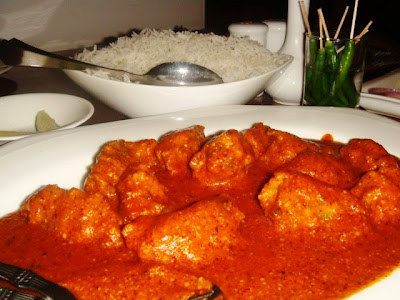 I found the concept of aam kashondi kaakra to be quite fascinating. Aam or raw mango is used to add a touch of zing to daals in Bengals. That dish is called, rather unimaginatively, 'tok daal' or sour daal. Kashondi, or mustard dip, is used to spice up the humble muri or Bengali rice crispies. I used to see elderly ladies and grannies having this as a snack while I was a child in Calcutta. It is also used as a dip for Calcutta street food specialities such as chop and cutlets. The crab cakes in the dish was similar to chitol machher muthiyo. This is a dish where fish cakes are made with the back and bony portion of Chitol fish. A Bengali classic rarely to be seen in kitchen nowadays with grannies hanging up their ladles.

The folks at Oh Calcutta had combined a Bengali seasoning, a Bengali dip and a classical Bengali cooking tradition to form a dish which came closest perhaps to Goan Balchow from the West Coast of the country! That's quite an adventure.

(K and I had the remaining portion of kaakra for our doggie bag lunch at home today. Both of us liked it but agreed that the chicken was better.)


We were too full for desserts but there was no stopping the merry men of Oh Calcutta. They got us a slice of malpua on the house. A Nawabi end to a royal feast. The Malpua was just perfect. It had the right texture and sweetness. The unexpected gift reminded  us of the complimentary sandesh that they gave us last time for dessert. 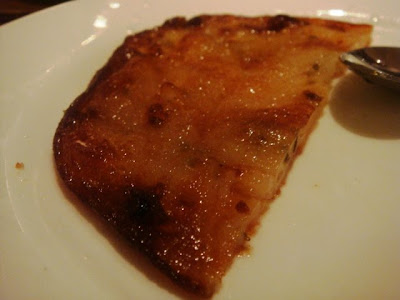 Oh Calcutta is not cheap. This meal with two non alcoholic drinks, two entrees, rice and luchis cost us around Rs 1600 (USD 30). But I think that that it's a good deal given the ambience, quality and quantity of food.

I would like them to give a shot at making the food look a bit more gourmet'ish though.

Note: Calcutta Club at Oshiwara is a good bet for a cheaper homely Bengali meal which is de-glamoured but very good and authentic.
Bengali food Mumbai highs South Mumbai

Home Cooked Oriya Food said…
Wow - heavenly to eat good food and be welcomed back at a restaurant you enjoy!
10 April 2010 at 18:37

Unknown said…
Kalyan, the aam kashundi kaakra, sounds exotic. Are you gonna try replicating it at home. I would have, but no kasundi here for me. I will try the Bangladeshi store to get some maybe. But for heaven's sake I cannot and will not deshell crabs.
10 April 2010 at 20:19

@Pree: Naah I think I will go for the lonka chicken first. We get Kasundi in Mumbai. Made by a Chinese company from Tangra, Kolkata!

Am planning to take the pulao journey which started with your post further today by trying to make a biriyani
10 April 2010 at 21:32

Happy Fork said…
sounds great....am tempted to make a visit soon...
haven't had their food in ages.earlier loved their kosha mangsho,bekti fry,steamed hilsa and mocher ghanto.wonder if those are still on the menu.
we had their food for guests when my brother for married.the guests still remember the food
11 April 2010 at 12:45

Scarlett said…
I like Oh Calcutta - the food & especially their service and the effort they put in remembering their patrons, by face if not by name.

A couple of Calcutta restaurants should welcome me with smiles too, IF only Calcuttans knew a thing or two about customer service & politeness!
12 April 2010 at 11:19

spice and more said…
That food looks great. So sad that we did not manage to have a meal there on our trip to Mumbai earlier this year. Next time for sure....
15 April 2010 at 09:39