The morning after... Poila Boishakh Dinner, 1417

on April 17, 2010
The first thing Bengalis ask themselves after Poila Boishakh or Bengali New Year is "what did you eat last night"
Well I ate too much. Came home after dinner and sat up for a while. Had only OJ and black coffee for breakfast today. And curd rice for lunch. Was finally able to breathe in the evening.
We went to the Oh Calcutta buffet last night. I am not very fond of buffets but this one won me over with its variety and the freshness of the food. The dishes kept marching in from the kitchen. as we demolished them one by one. It was a long journey through the rich gastronomique culture of Bengal. In the middle of central Mumbai. 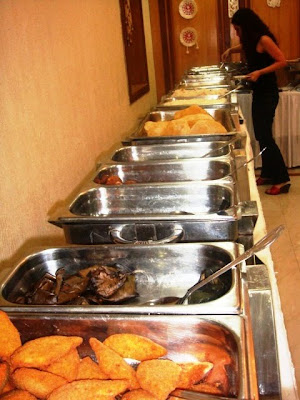 We started of with the snacky stuff - the chops. The fish chops were ethereal. The mutton chops solid. They had chicken steamed in banana leaves and chhana or cottage cheese too. The latter seasoned in some wicked aamchoor (Pickled mango masala). 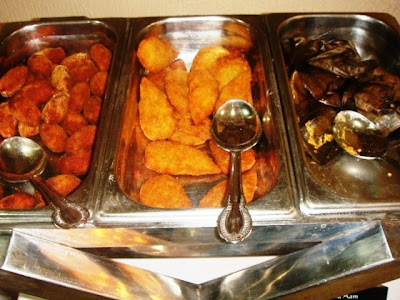 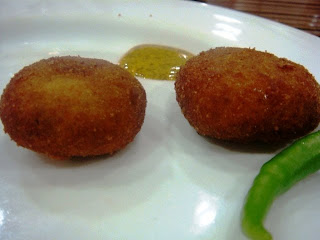 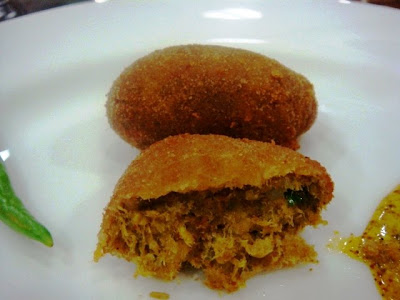 Then there was the ubiquitous rice. Steamed  rice to have the veggies with. And a light pulao for the special stuff. Folks in many traditional Bengali households eat rice before they leave for work. Rice is what defines us. The colloquial term for a typical Bengali is 'Bheto (rice eating) Bangali". You would be well advised not to use this term on a friend. It's slightly pejorative and condescending.
I particularly loved the mochar ghonto here. A banana flower dish perfected by grannies. The alu posto (potato in poppy seeds) were exquisite too. In fact the vegetarian dishes were good enough to get approval of the devotees of flesh at our table. 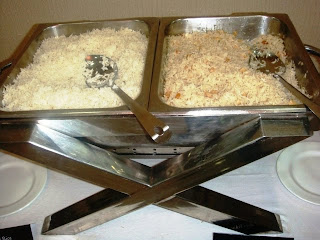 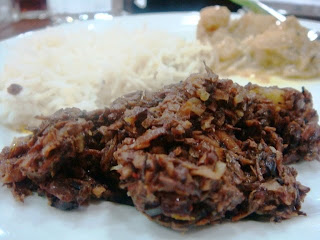 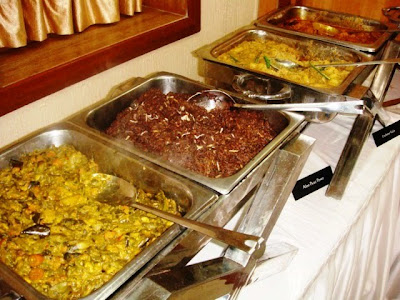 Then there was luchi, alur dom and kosha mangsho - the three deadly sins - the hallmark of decadent Sunday breakfasts and gala wedding banquets. 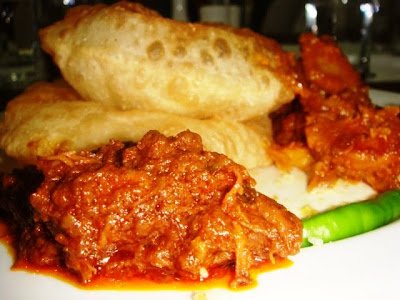 Meat normally is had at the end of Bengali meals. Chicken followed by mutton. The Kosha mangsho here won over a buffet cynic like me. The kacha lonka chicken pieces were too big though for the discerning Bengali. 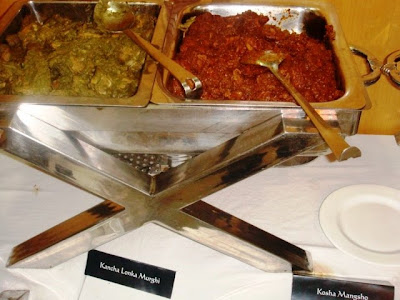 The dal wasn't too appealing but the alur dom more than made up. Again the same standards as their regular a la carte fare. Went very well with the luchis which they kept replenishing. 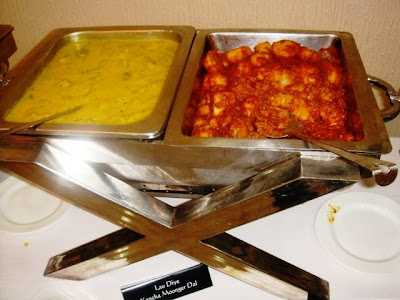 There was rui in shorshe or mustard curry. The chingri malai curry was the tour de force. There was an elderly Parsi couple with their elderly son. They did give us all a run for the prawn stakes. 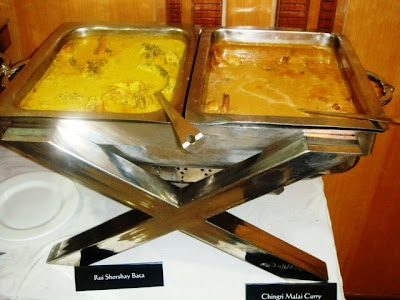 I had some tomato and aamshokto chutney with papad as a taste breaker before the sweets. I am a big fan of Bengali chutneys or chaatnees as we pronounce them. They had made it very well here. Brought back memories of chutneys that  I would eat after Durga Puja feasts in our building in Calcutta. 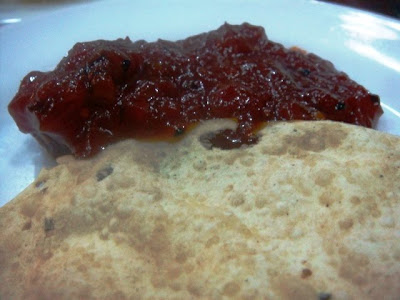 The dessert or mishti corner was the cynosure of every Bengali at the restaurant. The kheer kodoms and roshogollas were really good. The dark fried sweets like malpua and chhanar goja could have done with a longer sugar syrup soak though. Then there was payesh or Bengali rice pudding. Again meticulously made by grannies on special days. 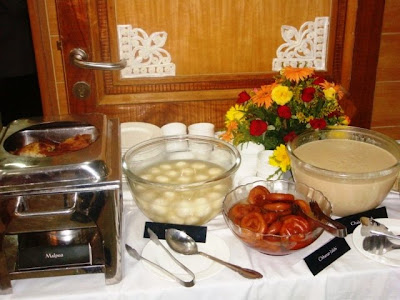 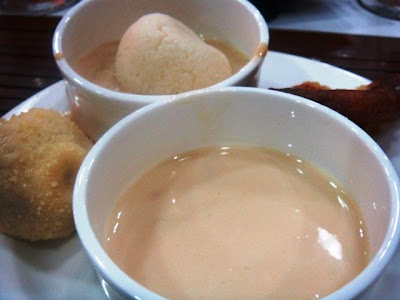 Any Bengali gathering is incomplete without 'adda' which means random discussions about any topic under the sun. We take this quite seriously. In fact there were two gentleman smoking outside debating the threats posed by Pakistan to India versus those posed by China.
We were too busy eating to talk at our table though. But tales from old issues of Femina, the film mag, did liven things up. 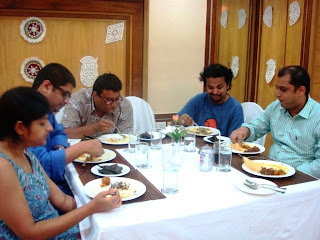 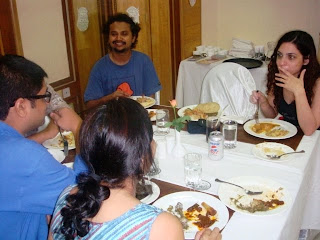 Soumik and I really batted through the innings like Gavaskar and Viswanath of yore. We arrived before the others and ate to keep our table busy. Funnily I don't remember having a pot belly being before dinner. As Obelix says, the chest must have slipped. 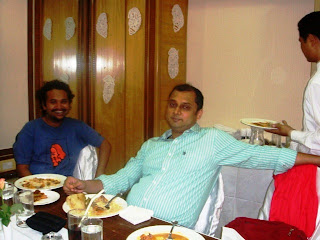 I did remember to hold in my breath before the next photograph. 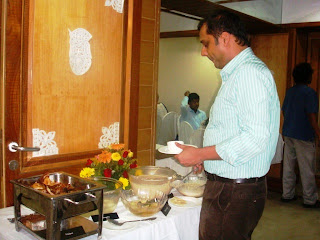 It was a festive evening. A single minded focus on food for most. Memorable food. The sort of food whose stories one can dine on for many winters. Mothers chasing children, begging them to eat. Middle aged couples eating in grim silence as the wife got food for the husband from the buffet. Peals of laughter. Bawdy jokes. Good natured swearing. Saris and 'Panjabis' (Bengali Kurtas) on show. Friends old and new.  Gathered together. Shared memories. The usual diaspora stuff. 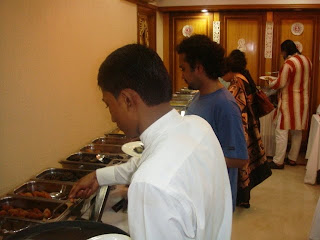 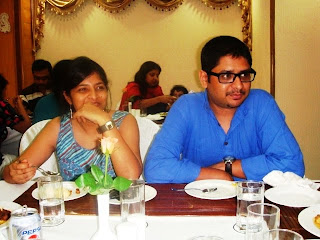 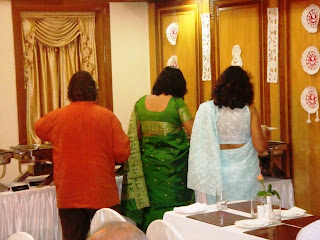 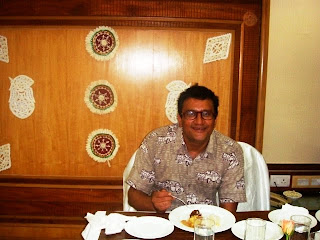 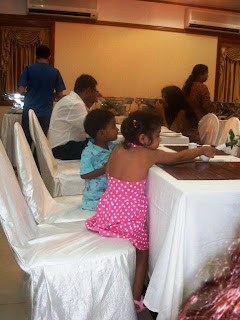 I must thank the folks at Oh Calcutta for yet another lovely Bengali New Years Evening. Specially Bhavana from the Speciality Restaurant Group and Sajal Chakraborty of Oh Calcutta who ensured that our group of Finely Choppers had a table specially reserved for us. 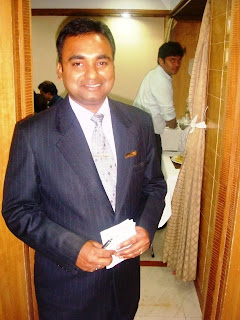 Hermano 2 said…
An excellent post, with a pleasingly gratuitous reference to my favourite cricket player of all time, "Little Vishy"

The meal looks great. Particularly, of course, the sweets.

Yes it was some feast. My rather 'Big Belly' reminded me of 'Little Vishy'

Happy Fork said…
looks wonderful! hope they have it on other days! am heading there!
My brother's wedding food was from there
17 April 2010 at 06:00

Lazy Pineapple said…
You made me hungry after putting pics of such delicious food.

The knife said…
@Pree: Thanks, you are coming to India?

@Happy Fork: you can check out on their FB page. I think its not there on the other days. Missed the wedding :)

@Somoo: thanks and happy new year to you too

Miri said…
So many similarities to the Tamil New Year meal (ok no non veg At All!!!) which was a day before. The raw mango chutney, the raw banana flower (we make vadas out of it) I wish there were a place in Delhi we could have all the traditional delicacies of Tamilian food on festive days. I slogged it out and made the entire meal including polis (like puran polis) a special sambar, tomato rasam etc etc .
Last year we tried going to Dakshin in the Sheraton - what a disaster that was - and the price!!!

SGD said…
Have been here on and off from Pree's blog. But had always been the anonymous visitor.....but your description of THE Oh Calcutta Naboborsho feast made me so nostalgic that I had to shed my lurker avtar and comment!!!

The knife said…
@Miri, wish you a very happy Tamil New year. I am sure that no restaurant buffet would compare to what you have made at home. Similarities between TNY and BNY? You could have knocked me down with a paper sada :)

@K: Some more of these post dinner ice creams and there will be own more alu for you

Pinku said…
lovely post....and just as mouthwatering as i has suspected it would be.

The knife said…
@Sharmila: I can always eat for two till you are back in form

S said…
That sounds like an awesome feast! We tried reserving a table too, but the place was booked out :( The food looks divine, though...glad you brought in the naba barsha on this splendid note!

Incidentally, some friends and I had gone there a week earlier...they have some additions to the menu...some mindblowing, some too experimental for my taste...but all interesting without exception!
19 April 2010 at 22:15

The knife said…
@S: I know. I got a table primarily though blogging. All those hours by the keyboard finally paid off :)

I went there the previous week too. Tried the kacha lonka murgi which i really liked. And the aam shokto kaakra which has its merits but wasn't as sublime as the former.
20 April 2010 at 00:22

Nishant Singh said…
Awesome review this one. Liked how you got your friends and the restaurant employees to agree with on your food-clicking-before-eating policy!!
Definitely makes me wanna go and try out Oh! Calcutta :)
20 April 2010 at 14:45

The knife said…
@Spice and More: Ditto :) Had a most uninteresting lunch at work

@Nishant: Thanks a ton. Both my friends and the restaurant folks have got used to my ways and have learnt to ignore me as they go around their day
20 April 2010 at 15:42

RamyaWrites said…
I have never had a flair for food or cooking, perhaps after seeing your post I am afraid I might eat more today. Nice pics as well a nice post Kalyan.
21 April 2010 at 07:55