Not for the red blooded: Farmers Market, Bandra

on April 04, 2010
It was close to one in the afternoon. The perfect time for Sunday breakfast. Headed out for Coffee Bean & Tea Leaf.

We saw the banner of the Farmer's Market in the little round-about opposite CBTL at Linking Road, Bandra. I though that we could take a dekko.

The Bandra Farmers Market is a few week old. It is supposed to be an 'organic' market. I am suspicious of anything 'organic' in India. Typically it means higher prices, poor taste, khadi kurtas and jholas. Places to be seen at. Hedonism doesn't feature anywhere.

Still couldn't resist the urge to check it out. 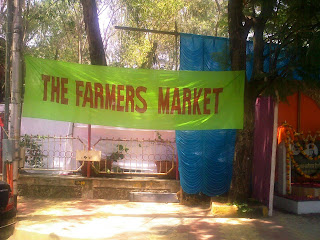 Well this is the only picture that I took. What lay inside was as expected. What I had heard someone once describe as 'destaurated monochromatic'. Dusty. Faded. A few stalls selling ragged carrots and potatoes. The lay out was far from tempting. There were more stalls selling expensive handicrafts and tee shirts instead of farmers produce. For some reason K asked me if I'd like a tee which said '100 p c green'. Aah, the sarcasm of those woken up from their sleep.

There was a food corner. As K put it, one didn't even want to touch the the free taste samplers around. I could see dull, congealed stuff on plates which people were getting excited about. 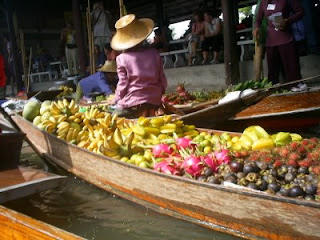 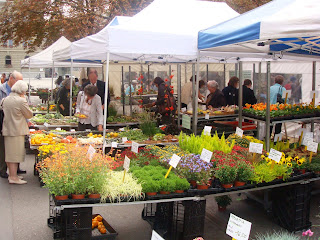 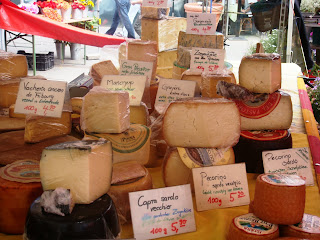 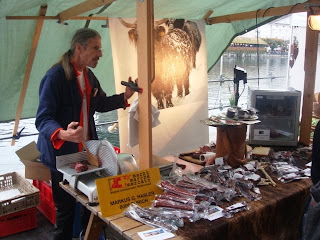 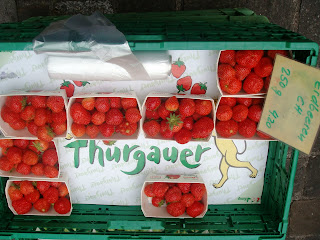 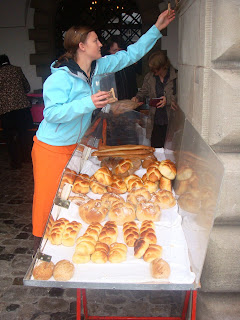 I guess there is a market for this sort of thing. All the parking spots close by were full after all. Rare for a Sunday. Which says it all. The market was full with foreigners. And locals dressed down in colour coordinated khadi. I saw a sign at the entrance, 'chandan teeka (sandalwood dot) to keep you cool'.

I guess I am too base for all this. I need my A C.

It was a place to be seen at. Not if you are 'The Knife'.The Organic Farmer's Market is not the place for a Finely Chopper.

Coffee Bean and Tea Leaf (CBTL) across was a better bet for breakfast. The perfectly balanced omelet, brew of the day (coffee with a strong point of view), Ultimate Mocha and  sinful cheese chilly taste helped soothe our organically frayed nerves. And a call from my mom about her bumping into Mr Victor Harris, one of my favourite teachers from junior school, brought alive wonderful memories.

CBTL's a good package with its food and ambience. I wish the waiters were more informed though. Sample this:

What vegetables? How are they different?

Blank look followed by a repeat of the original dialogue.

"I don't want my coffee in a glass"

Waitress nodded and walked off. I thankfully managed to get someone else to fix things for me.

Opposite the Farmer's Market is another temple for Finely Choppers, Hangla. I picked up a half chicken biriyani lunch. Their Calcutta biriyanis and mutton rolls are very authentic.

Not entirely though. Where in Calcutta would you get a roll guy to fry the onions on request? Or get them to put a leg piece and extra alu (potato) in your biriyani? At Hanglas, Bandra, they do so. Without a scowl. And they apologise and point out if the leg piece is a thigh one and not a drumstick. Love these guys.

A nice start to Easter Sunday.

Is this a good time to say that I gave in to temptation at three in the morning and had the rum and raisin Easter egg that Dr Miranda's son had made. It was so potent that it knocked me off and I finally slept
Bandra Bites Breakfasts Woes

Ushnish Ghosh said…
Dear kalyan
When every one is enjoying Easter , I am enjoying this great writing !!! It is raining and bad weather...had a date with Juliet at Verona yesterday...could not make it due to bad weather and today too...i always wanted to go to Verona to see juliet's balcony ( and not the great historic places of verona)
It seems " Bad- luck tao kharap ja-chhe aj kal"
bhalo theko tomra
ghosh kaku
4 April 2010 at 18:06

Kalyan Karmakar said…
@Ushnishda, do remember the lessons of our ancient civilisation. 'Intezar ke fal meetha hota hain'. Your comment took me to farway magical lands in the middle of a muggy evening here. A rare bright moment after KKR lost its match a few moments before that

S said…
Read about the upcoming farmers' market in the papers a few days earlier. Apparently, the vegatables are sourced from fairly far flung areas...Raigad, if I am not mistaken. By the time the produce makes it to Bandra, they have all wilted, and as was evident, the whole point of a farmers' market, i.e., access of fresh, wholesome produce was entirely lost!

Agree with you about CBTL...the waiters are really clueless...and the perpetual excuse for ignorance seems to be that said waiter is new!!! The coffees and food there make up for the ignorance though :)
5 April 2010 at 12:51

@S I live beside Pali 'Market' a lane full of vegetable shops interspersed with meat shops ... who needs a farmers market

Kalyan Karmakar said…
@Scarlett: I was recently thinking about this and wondered why we go into a restaurant and speak in English. A reflection of English being the professional lingua franca I guess.

Miri said…
Attended a farmer's market in Delhi last week too (was it sponsored by Altitude by any chance?)

The market had just 6 stalls - but luckily what they had was good (no clothes! - some nice cheese, herbs, jams,snack bars, honey, veggies....wouldnt make the trip all across town again, but atleast it wasnt a waste of a trip
7 April 2010 at 16:43