I normally greet Monday by pulling the sheets and trying to cover my face. Then reality kicks in. Such as the driver calling up to say that he is not coming. Must have over eaten. And Meru, the radio cab guys, calling to tell me that my booking's cancelled.

So off I went today trudging into Princess Lea and taking the wheels half asleep. The coffee that my co-passenger and fellow morning hater, K,  picked from Gloria Jean's helped me stay awake while driving down. And a tasteless plate of fruits did the job during the drive back.

I was quite hungry by the time I reached Bandra. I thought of various snack options - Hangla, Falafel - before settling on Hearsch. I was so hungry that I ate up the chicken burger that I bought over there itself. I had some time on my hand and thought that I would go and check the Godrej Nature's Basket shop further down on Hill Road. 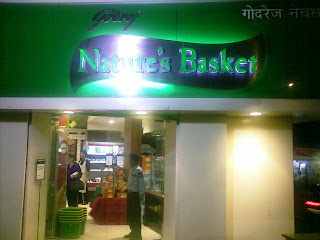 GNB opened a few months back. Shamefully enough I hadn't gone there yet. 'Shameful' as it is supposed to be the ultimate food gourmet chain. Just the place where you would expect to find me.

Let me explain. I live close to Pali Market at bandra. A few steps away from Sante the boutique gourmet food shop. Then there are a few excellent cold storages close by - Marks, Meghna and Judes - where I get my fix of meats. And the Gujarati food stores from the fancy Regal Stores to New India Stores which, between them, have a range of imported coffees, sauces, cookies and cereals. So I never saw the need to go to GNB.

I finally entered GNB at Bandra and immediately saw that it was a foodie's fantasy. Rows and rows of exciting food branching into different sections. I got into the chocolate section after rushing past the veggies (again available at Pali Naka). Then saw the beverages. A plethora of international brands.

But the sheer range of stuff here was overwhelming. I gave the wine section a miss and headed for the meats. Sampled some Serrano ham and Black Forest Ham. Both were very nice and I picked a portion of B F ham and bagels for dinner. 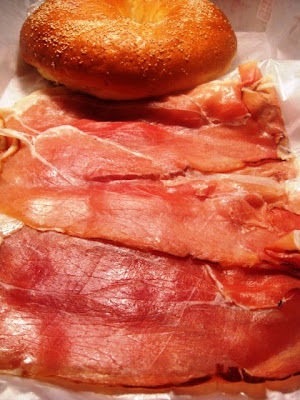 Then tried some Stilton and Gorgonzola. Both were nice and sharp. We have some Gloucester and Cheddar at home. Will come for replenishments when they get over. The pastry counter looked tempting. I tried some of the samplers and bought a brownie cheesecake. We had it after dinner. Very tasty. The chocolate was very distinguished, solid and had a faint salty taste thanks to the cheese. We both enjoyed it. It was bigger and more expensive than that of Sante. Sante's brownie cheesecake is to die for too. 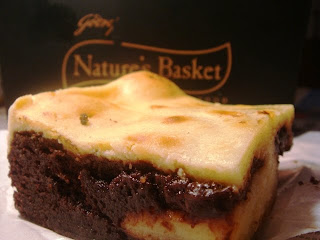 I walked around a bit and picked up prawn crackers and a light ice tea for K. My observations indicated that GNB had stuff which was there in other shops AND lots more in terms of brands as well as variants. It's a one stop shop as it has everything from breads to veggies to meats to cheeses to sauces to desserts to pastas and... you get the point. It works in a place like Bandra which doesn't really have a big mall. Plus it seemed to be better stocked than gourmet food sections of places like Hypercity and Inorbit and other malls. Though, as I said, you could get parts of what's on offer if you walk around at places like Pali Market. Could get the odd better deal too. Depends on how intrepid a food shopper you are.

I spent about an hour there after planning to just peep in! I must say that it was fairly crowded and I had to wait for quite a bit before I could pay. At 8 PM on a Monday. So much for the recession!

Shops like GNB are a good alternative to the hours one spends at places like Migros, Carrefours and Big Cs while travelling abroad. No need to spend precious forex or luggage allowance the next time one goes abroad. A quick walk in the neighbourhood can take care of things.
Bandra Bites Conti Mumbai highs Oriental

Lazy Pineapple said…
interesting...I had never heard of this shop before..

Pinku said…
thanks for this lovely post...purely from a professional point of view ;)

Rushina said…
And how unfair is it that you finally do this when I am not around after the million times I have been telling you to come there! You have to make this up to me and take me on that Bandra foodie discovery now!
13 April 2010 at 15:06

Kalyan Karmakar said…
@Lazy Pineapple: Yes most cities here are quite up to speed with the rest of the world. You have more stuff available to you in terms of consumer goods and service. On the negative side infrastructure - traffic, electricity, water - is crumbling under the growth

@Scarlett: And yet I know you will be there :)

@Rushina: I seem to have ruffled a lot of lovely feathers with this article. But we will always have gelato... and lots more too

Anonymous said…
This brownie Cheese cake fascinates me!!! I keep passing by this place whenever I am bombay, never had a chance to peek in, maybe I will this time around...this brownie cheese cake sounds too tempting to let go ;)

Miri said…
What a coincidence - GNB just opened a two weeks back in GK II market which is the lane next to ours. Me and my neoghbours were over the moon - no more going 5km away just to get cheese or even tofu!!! I found it very well stocked , but what my neighbour cribbed about was the expiry on some of the stuff was a few months away....but I think I will live with that!
17 April 2010 at 21:53

Kalyan Karmakar said…
@Kaus...the cheesecake was fascinating though i can't claim to be a choco cheescake virgin

@Miri: 5 km? Wow feel really blessed. Yes i know about the Delhi launch. Someone involved with GNB told me that their 'far from expiry date' stock was a plus. Your comment is interesting in that context
19 April 2010 at 01:43