on April 22, 2010
Spaghetti Kitchen (S K) at Phoenix Mill, Mumbai, will always have a special place in the world of Finely Chopped.

Finely Chopped owes its existence to places like this. I had begun my blog initially as a crib blog. Spaghetti Kitchen was the subject of one of my first posts which I wrote way back in October 2007. Lousy service, cold food, substandard fare... enough to give birth to an earnest blogger. As time went by Finely Chopped become much more than a crib blog. And I never went back to Spaghetti Kitchen.

We headed there for lunch after much deliberation and a conversation about someone who wanted soup for lunch. Soup didn't feature in the final script though.

The person at the door of S K asked us 'Indian or Italian' when we entered. Spaghetti Kitchen shares the premises with Copper Chimney. I didn't hear him properly and said 'continental'. 'Indian or Italian?' he repeated. Luckily one of his colleagues convinced him that Italy was part of the Continent and we were seated.

I began to have misgivings. Was an ethnic 'Loins of Punjab' heart hidden behind the Azure promise of pasta? But why be biased.

So how have things changed since my last visit?

Well I have even less hair than before. And a lot more flab. That doesn't interest you?

I had complained about the food being served cold last time. I am happy to report that the food was brought hot to our table this time. In fact it was steaming. And stayed warm while I attempted a few cell phone snaps.

We ordered a Giriellini Di'pollo (Rs 275 - USD 6 -copied the spelling from the bill). The menu card described this as chicken breasts wrapped around mozzarella with sun dried tomatoes.

The dish, when it arrived, was hot and plated aesthetically. It failed to impress though. The taste of tomato in the sauce was too overpowering. The meat too tough. The mozarella completely lost which was a big disappointment for a cheese addict. There was a spinach and corn bed, the point of whose existence foxed me. 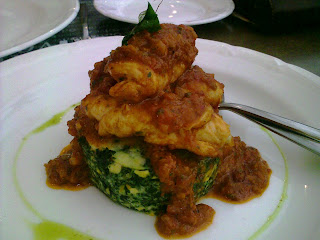 I ordered a Penne Vodka. I used to quite enjoy the Penne Vodka here. As Chef Max told me during our wonderful chat sometime back, Penne Vodka was a post WW II invention for Russian soldiers quartered at Milan.

The Penne Vodka which they served at Spaghetti Kitchen today would have made the soldiers forget all about the Armstice and get pretty violent. The penne was stiff. The shards of cheese were gone. The sauce had an overpowering smell of cheese. Didn't have the finesse and the intriguing background of faint sweetness with a micheveous touch of tanginess which the Penne Vodkas at Spaghetti Kitchen earlier had. This was more  a boil in the pan and pour on pasta version. Uninspiring. Not memorable. Not befitting the price of Rs 450 (9 USD). 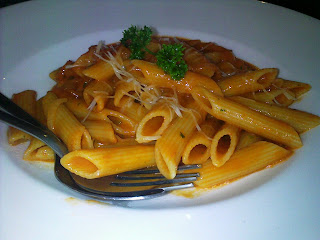 So how would I sum up Spaghetti Kitchen now? Two and a half years into food blogging? Would I change my opinion?

Well it doesn't deserve to be in 'Mumbai Low'. The food was acceptable. But then 'acceptable' is not what one expects at these prices. So Mumbai Lows it is again. Out of the Blue, Cafe Mangi, Del Italia ... slightly cheaper if not the same price and leagues ahead in taste and quality.

Thank God for Costa and its Chocolate Tavelotto for soothing frayed nerves. Though the guys at Phoenix should switch on the Aircon in the lobby.
Conti Mumbai lows South Mumbai

Deutero said…
I've been to SK many times and actually quite enjoyed the food, but if you remember, I'm a vegetarian, so yes, the vegetarian side of things are quite nice, though I haven't been there anytime this year, so not sure if quality has changed.
22 April 2010 at 23:04

Gaurav said…
Spag Kitchen is one place that has real issues with consistency. Once in a while they will serve a tremendous meal and others they will go down in flames....

Happy Fork said…
Didn't like Spaghetti Kitchen either!Food dosn't have freshness or flavor.The ambience is the saving grace.
How is Bonobo in Bandra?
23 April 2010 at 08:22

Scarlett said…
450 bucs for a plate of pasta & you get served such crap?? It's criminal. SK has always been one of my least favorite Continental, sorry "Italian", restaurants with good reason.
23 April 2010 at 12:38

Kalyan Karmakar said…
@Kumar: great to hear from you. I somehow feel that good food's not in their DNA. If it was then even vegetarain should have been good. Maybe its the consistency that Gaurav speaks about. I have a problem with that. We are expected to consistently pay money after all

@Happy: Ya the two storied seating is nice in our cramped city. Not been to Bonobo. Think its a pub. Not sure

Unknown said…
Was visualizing you sweating it all out while reading this post. Nice one, Kalyan!

S said…
I suppose SK has an issue with consistency...coz the last time I went there, the food was fairly good. Of course, I had only a veg pasta that day...didn't feel like meat...so no idea about how their meat based preparations would be.

On a tangent, if you are ever in the vicinity of Infiniti Mall, Andheri, you could check out this tiny new place called Pizza Roma...could thin crust pizzas and hearty pastas. One of the few places where I liked the pesto sauce.
25 April 2010 at 13:57

Kalyan Karmakar said…
@S: I tried a veg pasta. My grouse with non veg add ons in most places is that they add this at the end and the taste doesn't spread acorss

Must check out Roma if I go that side. There is a place called Ray's pizza near Nature's Basket Bandra. Seemed in the same genre from outside
27 April 2010 at 15:09