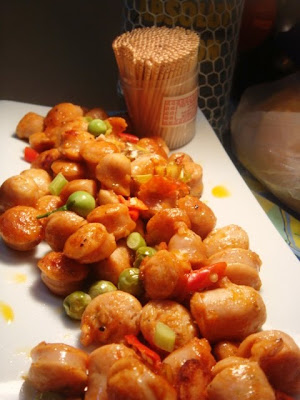 Inspired by great hosts like Kirti, Ips and S, I decide to make fresh starters for our latest party. It was another matter that I ended up cooking the main course too after the guests arrived. But then they came early. Not very Bong I must say.

I chose sausages for the starters. Cold cuts cook easily unlike chicken or pork. There is a lot you can do with them. They are quite well behaved and don't give out water unlike mushrooms or prawns when you fry them. So, quite hassle free. I used Thai condiments as I had some stock left from what I had bought to make the Thai curry. I used chicken sausages as chicken is more acceptable than pork. Works for a larger group. I assume you could do this with paneer too.

The plan worked. It was very quick to cook. It is so simple that even the culinarily challenged can cook it. Looked colourful and different too. Focus groups showed that it was quite well accepted. 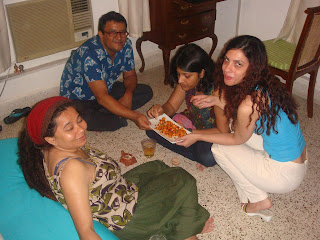 We had a two and a a year old in the party who couldn't have enough of it. He kept smiling and saying 'jhaal' (Bengali for spicy) as he ate them. His mother said that she had to serve him fried sausages on toothpicks for breakfast the next morning. The jury is out on whether the novelty of toothpicks worked for him.

The thirty and forty year olds liked it too :) Next time, we want this with pork!

Kalyan Karmakar said…
@Kirti, Soumik...made it for dinner tonight. Picked up sausages from marks. Came back and saw that they had slipped in pork sausages ;)

But seriously pork sausages and bacon hakka noodles next time
6 April 2010 at 01:05

Unknown said…
Kalyan, where is that bacon hakka noodle recipe. I intend to make that this weekend.
6 April 2010 at 06:33

Miri said…
The second Bengali word my daughter learnt was "jhaal" - since her best friend used to find things at our house too "jhal" :) The first word was of course "jol" ;)

Have you tasted Keel's cheese sausages? to die for!