on April 24, 2010
Anyone who has grown up in middle class Calcutta of the 80s and early 90s would remember shops like Jalojoga and Kalimpong. These were pastry and patties shops selling simple chocolate cube pastries, rum balls, mutton (cheaper and spicy) and chicken  (bland and more expensive) patties and egg devils. Rare treats for most of us. Birthdays perhaps. Or one Rupee fifty (late eighties) collected over a few days for a 'relished over a long time' pastry or patty. Flurys and Park Street belonged to another world. More premium. More expensive. As did the Cookie Jar which took La Martinere Land (a posh school) of Loudon (or was it Rowdon) Street by storm. Monginis came in towards the early nineties bridging the world of Shahebpara and Bangalipara.

I came to Mumbai and realised that Monginis was a more humble establishment here. Croissants etc, Gaylords and Birdies by Taj set the standards in a simpler world in Mumbai . Well before Philly Cheesecakes, Baileys Gatuex and Death by Chocolate.

Mumbai had a few stand alone pastry shops too. These were run by Iranis and were more affordable. One such shop is Merwans near Andheri Station. I had seen this shop when I was new to Mumbai. But was introduced to it by Kainaz. It was a favourite source for her for her 'Mamar Barir Abdar'. A Bengali phrase which means being spoilt silly by one's mom's side of the family. A phrase, and sentiment, which translates across cultures. 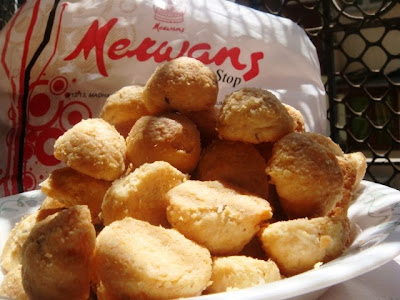 Merwans makes the best, and I am not exaggerating here, the best chicken garlic patties that I have ever had. How good is it? Well sample this. Mamma used to send some for me through Kainaz when I could not come with her. The patties would have probably been bought in the morning. Kept outside all day. I'd get to have it late in the evening. And since there were lots, sometime the on next day too. The crust would remain as soft and crispy as ever. It would not become hard or stiff. Nor would it crumble. And the chicken filling would remain as well flavoured and succulent as when it was made. That's how good it is. In fact the chicken garlic patties here is so popular that they get sold out by 5 PM.

Merwans has grown since then and has another shop next door. They have expanded their menu too.

Mama got some chicken garlic patties for us when he visited us a few days back. Mamma would be happy to know that Merwans is still doing a great job in a changing world. The patties tasted as good as they did ten years before. 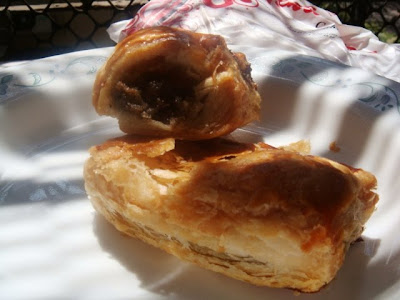 The chicken patties are much cheaper than the much poorer quality ones that you get in bigger confectionery chains. Merwans is a good pace for old school cakes and pastries. Sponge, sugary, oodles of cream, thick frosting, big, very big, cheap.

Another family favourite from Merwans are the butter biscuits which you saw earlier in the post. Old school Irani specialities. One of the simple pleasures of life. Butter makes everything better after all. 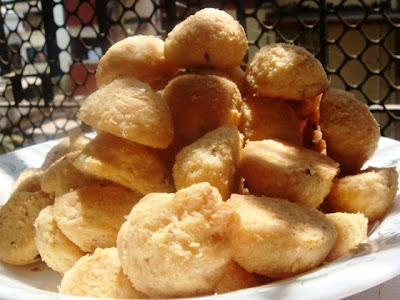 There is another Irani bake shop called B Merwans at Grant Road. They are famous for their Mawa Cakes. A local favourite. I am not sure if the two Merwans are related though.

So that's about Mumbai and Calcutta. Are you aware of any such shops in Delhi, Bangalore, Chennai or other cities of India?
Icons Mumbai highs Mumbai local

Lazy Pineapple said…
Even I wish I could taste them :)
Pune has Irani bakeries like this....they bake amazing cookies and cakes.
24 April 2010 at 14:33

S said…
and right across the road from Merwans are the twin shops of Ahura and Mazda, one of which sells wines and the other sells good, old style puffs, stroodles, pastries and biscuits :)
25 April 2010 at 14:44

@Lazy: Kayanis of course. I remember going there at once at 1230 and was told that they were shutting down and would open later

Farriemist said…
I really miss the puff patties and the yummy pastries of Bombay. We do get some good stuff in Dubai but nothing comes close to that amazing flavor we get in places like Merwan, Sassanian, RTI (oh those lemon tarts).