Almost as smooth as the finest of silks - Mainland China, Bandra W 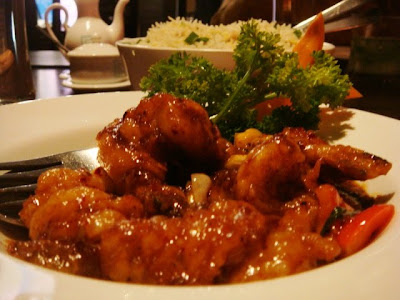 Mainland China and Oh Calcutta are both owned by the same group, Speciality Restaurants. They both have their fans across the country. And both started in Mumbai. The former in Andheri E and the latter in Dadar. So folks in Calcutta, Delhi, Bangalore ... welcome to the club, but we were there first.

Both have opened new branches at Mumbai too. One such branch is Mainland China at Shopper's Stop, Bandra W. I have been to the Andheri E one. The one at Bandra looks much larger and you get a sense of space that is so rare in Mumbai. We had gone on a weekday afternoon so it was admittedly less crowded. We were really impressed by the service. The food was great but had some issues. The experience had its highs and woes. The former dominated. 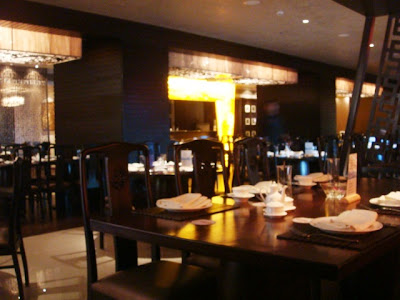 We started with a couple of non alcoholic drinks as we were in between meetings. Ips had something called 'Chill Chilly'. An innovation of iced lemonade, mint and split green chillies. This was a drink which blew you away with its refreshing mix of citrus zest, cooling mint and mischievous spicy under currents of green chilly. The drink had a wicked side to it and 'Mumbai Fling' would perhaps be a more apt name. I had a peach ice tea which was syrupy, sweet and matrimonial in contrast to the illicit passion of the Chill Chilly. 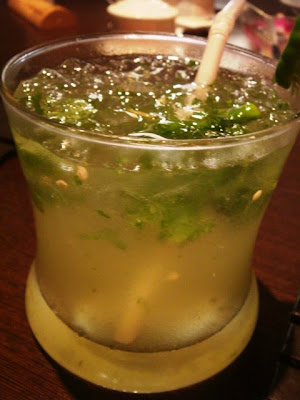 We then placed our order with Sanjay who turned out to be one of the best Maitre de's that I have come across in a restaurant in a million years. He was well spoken. Knew his menu. Understood our tastes and made appropriate suggestions.

We wanted a dry prawn side dish. He suggested Hunan Chicken. He explained what it was. Saw our discomfort with red coloured dishes and suggested X O chilly prawns instead. This dish is a gravy dish but he promised to make it dry for us.

I asked him what 'X O' was. He competently explained that X O stood for 'extra old'. That it was made in a base of crushed shrimps and pickled chillies. Sounded exotic.

The dish lived up to its billings. Six huge prawns. No batter to come in the way of ecstasy. Juicy, succulent, fresh, sensuous. The dish was prepared dry as requested. The sauce offering a faint marinade which brought alive the prawns in their full glory. A dish highly recommended by Ips and me. Certified prawn lovers with very high standards.

I made a mental note to treat the women in my family to this. I could visualise Kainaz, my mom in law and my mom jumping with joy over this. As would my brother, father in law, Jamshed Uncle, Finely Choppers Soumik, Irin, Rahul, Sasha, Arindam. This was a landmark dish in the hallowed prawn wall of fame. 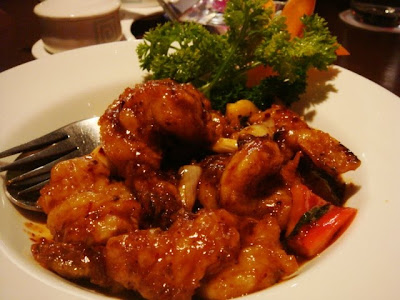 We ordered a  Crab meat fried rice with this. The rice was just as I love it. Dry. Firm. Very subtle flavouring. No heavy sauces. The best that 'Indian' Chinese can get. This was nothing like the sticky, short grained fried rices that I have had in ethnic Chinese owned restaurants in Malaysia, Singapore and Switzerland. Something tells me that the ones in the real 'Mainland' would be closer to these rather than the fried rice in Mainland China.

So if you have landed in Mumbai as a part of a trade delegation from Beijing or Chengdu or Gouanzhao then don't come to Mainland China expecting home-like fried rice. Go to Oh Calcutta instead and discover Bengali cuisine.

There was a fundamental problem with the crab meat fried rice though. Look at the picture below. Look carefully. Can you see any crab meat? We couldn't. Technically I did find two tiny bits but that's all. 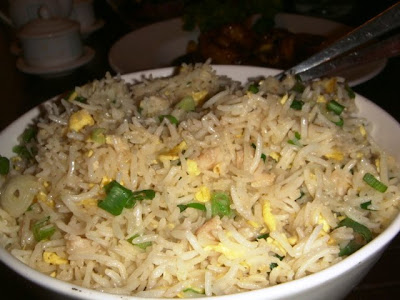 We pointed it out after our meal. Waiters apologised profusely. Said we should have pointed it out earlier. I replied that we didn't have the time. They said that the crab was minced. But honestly I seriously doubt if there was any crab. Not even an anorexic ramp model size zero one. It was a very good egg fried rice masquerading as a crab meat fried rice. We felt cheated and disappointed. It wasn't cheap.

They insisted on serving us a dessert to make up and requested us to wait though we were getting late. They brought freshly fried hot chocolate rolls with vanilla ice cream. Tasted excellent. Why wouldn't it? Chocolate, deep fried flour casing, ice cream ... a winning formula. 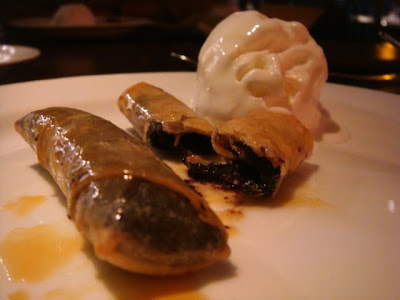 But we still wanted our crab meat. Or would have appreciated a correction in the bill.

Would I recommend the place? Definitely. Excellent service. Fantastic food. Relaxed spacious ambience. Pricey though (two drinks, side dish and rice cost us Rs 1200/ 20 USD). And be careful to check to see whether you have got what you have ordered.

Today was a day when I scurried between meetings across the suburbs of Mumbai. Bandra Sion Bandra Goregaon Andheri E Bandra. The realisation struck me that there are very few things in life that you can bank on. The traffic on Mumbai roads being one of them.

At least I was rewarded with a great meal in between. 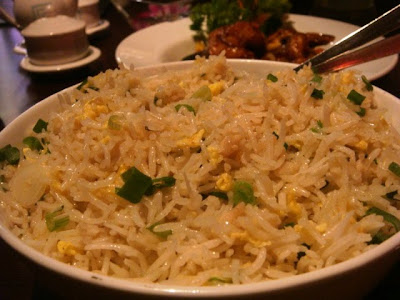 Bombay Foodie said…
Hi! We have a blog for all Mumbai based foodies at bombayeaters.wordpress.com

Scarlett said…
I've never been to the Mainland China in Mumbai. I don't know why. I've been to the one here (at South City Mall) twice. Both times we went for buffet. The buffet lunch was really good, but the food served at the buffet dinner wasn't the same quality. Still, I would say that Mainland China is one of my favorite Chinese restaurants along with Bar-B-Q & Red Hot Chilli Pepper in Calcutta. I like their food overall and really appreciate their service. And something tells me I would love that fried chocolate roll with vanilla ice-cream! :P

Kalyan Karmakar said…
@Scarlett, in fact Ips pointed out that there was honey too but that was overshadowed by the other blockbuster stuff.

I am a buffet sceptic. They had a set menu option here.

Anonymous said…
Went there one evening... had the waiters sing "Happy BIRDday" at least half a dozen times at various tables. It was waaayy to noisy. The food was excellent though... but at the prices, I wouldn't expect any less.
7 May 2010 at 13:07

Kalyan Karmakar said…
@Shaswati, I had Sui Muis in their Andheri outlet. Nice :)

@Anon: I went in the middle of the week. So very quiet.

There are quite a few places who give indifferent food at high prices. People have explained that to me by saying 'you didn't order the write things'. I don't dig that. There was nothing wrong about my money
7 May 2010 at 19:01

ab$hake said…
I used to love the crab meat fried rice at Mainland China...sad that yours dint turn out good.. The crab meat in it is usually minced and doesnt come across as chunks of crab meat which is what I expected the first time I ordered it there. But the flavor of crab was indeed there and I usually couple it with chicken chilly. I used to love that combo at mainland china...
8 May 2010 at 14:10

Kalyan Karmakar said…
@Abshake, this was a very good egg fried rie, uncorrupted by the taste of crab
@Ghosh kaku great to have you back
@Deseng: Happy Fork's answered it :) Original ancestor was at Dadar
@Dew aaw, thanks
9 May 2010 at 02:13

Purba said…
Mainland China in Gurgaon is value for money...but the food....hmmmm. The Delhi outlet is far better.