on May 06, 2010
I guess there are times when a post sticks in your head and you can't sleep till its out. So here I am, out of bed, back at the keyboard.

A Catholic reader from Bandra had written in earlier this year on some great eats at Bandra. One was the Bandra Gym   Open Air Fete. Another was a little hole in the wall place in the bylanes of Bandra which apparently served good home cooked Goan food. Catholic Goan food might I add. So lots of pork and beef. No fish and I doubt if there was anything vegetarian. 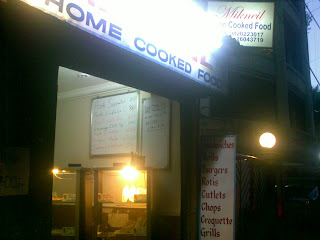 Three to four months later I did make a stop at the shop in the winding lane which connects Bandstand to Shirly Rajan Road. Past an ornate Church and a humble bar called Yacht. The lane is dotted with cottages and bungalows. Very Bandra. Very unlike the rest of Mumbai.

And so I discovered Mikneil. Their baseline is simple. Home Cooked Food. Three words which say it all. A Goan home in this case as Dominic, the friendly gentleman at the counter, told us. The shop is open between 5 PM to 9 PM. It is a simple operation. The food is kept in a regular fridge. They have a micro. Or you can take the food home. Parking is precarious but possible. No seating. 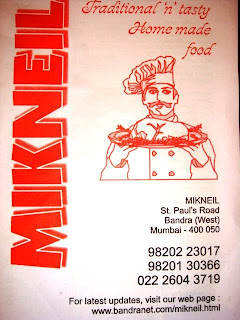 I was very excited when I saw Tongue Moilee scrolled on the board. Both K and I love tongue based Goan dishes. I was intrigued to taste it in a Keralite Moilee sauce. One associates the latter with fish dishes after all. Well, the Tongue Moilee was sold out and I will have to go back for that.

Picked dinner. the food lived up to its promise of 'home food'. Not very spicy. Tasted wholesome and earnest. Not commercial or artificial. Slightly lacking in salt! But overall left us with a very very happy feeling when we heated the stuff and had it for dinner. Here's what I bought.

A fish cutlet which was pretty tasty. Very genteel and not fishy or too sharp. 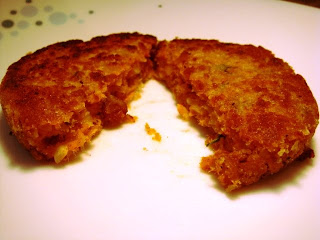 Prawn chop. Tiny shrimps encased in mashed potatoes, mixed with East Indian masala. Had a nice zing to it and was our favourite. 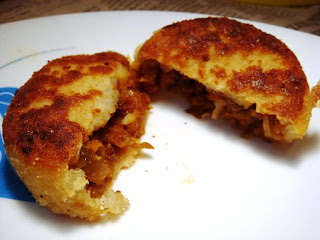 Beef chilly fry. Huge quantity of shredded beef, deep fried onion strips and little bits of tomato. Had a nice solid and faintly sweet taste. The meat was a bit chunky but then beef is not the favourite meat of either of us. It was very filling and clearly tasted like it was cooked by someone's mother. Though Dominic told me that the owner, Mr Neil, cooks the food. 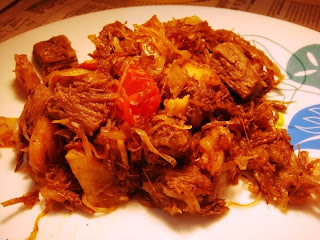 Then there was K's favourite Goan dish, vindaloo. Vindaloo fascinates me as a dish. No two vindaloos taste the same. They are normally angry red in colour. Yet do not taste very hot. Look scary but are far from it. Do not bring tears to your eyes as you would have otherwise expected from the blood red sauce. A very sinful experience. Makes you feel as if you living on the edge. One of the most adventurous looking dishes that I have come across. I, personally, am a sorpatel fan though. The darker Goan cousin of vindaloo made with tiny chopped bits from all parts of a pig.

The vindaloo at Mikneil had a nice, resolute taste of garam masala. It wasn't too sour. Could have done with a bit of salt. K thought it was OK though. She loved it in fact. The pork was plenty and of very good quality. 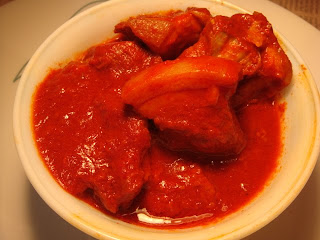 All of this cost us Rs 169 (3.5 USD). I plan to go back soon. This time for Goan sausage chilly fry and the blessed Tongue Moilee.
Bandra Bites Goan rhapsody