on May 15, 2010
I headed to Coffee Bean & Tea Leaf last evening with colleagues for a meeting after work. I introduced them to the Ultimate Mocha as I normally do to first timers at CBTL. As always, they too loved this ice blended coffee made with crushed coffee beans coated with chocolate. Later in the night, after we returned to our houses, both my boss and I were down with the runs, the only 'runs' that features in either of our lives. The U Mocha being the common factor. Both of us were worse for the wear in the morning and attended meetings close to home and worked from home. Felled by a cold coffee? How lame is that? My only solace is that most food/ travel writers Bourdain, Majumdar or even Sanjeev Bhaskar have chapters in their book where their internal systems go for a toss.

I was wondering what to do for lunch after a meeting today, stomach was still wincing, curd rice seemed to be my fate. I discussed this with my colleague, partner in food crime and fellow Chinese food addict, Ips, and soon we found ourselves heading to Mainland China at Shoppers Stop, Bandra! In my defence, I laid down the boundaries. No prawns. 'Small' portion of rice and soup between the two of us.

Mainland China at Bandra is fast becoming one of my favourite 'Chinese' restaurant in Mumbai. You can argue that it's not 'Chinese'. I think that this entire debate versus Indian Chinese versus Chinese Chinese is unnecessary and pretentious. Yes the Chinese food in India is adopted to Indian palates. But then so is Campbell soup based 'chicken tikka masala' in the UK. And I believe that it is their national dish. So whatever works. As long as it is not cucumber or carrot sushi (a fundamental semantic flaw) or tandoori paneer pizza (neither here nor there).

The best thing about MLC, Bandra is their level of service. They got my brief right. As did they last time. I asked for a dry chicken dish with less spice. The person taking the order suggested Keong's chicken with green chillies and spring onion.

I couldn't have ask for a better dish given the circs. The meat was extremely succulent and juicy. Bounced in your mouth like bright and chirpy sunbeams. Not the deep fried, chewy chicken which Chinese restaurants tend to serve. The marinate was extremely well  flavoured ...  blend of salt, sour and touch of heat. Flirtatious and yet caused no harm. It went very well with the small portion of egg fried rice that we ordered. The rice was firm and subtly flavoured in the best tradition of Indian Chinese fried rice. 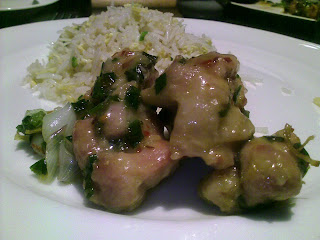 We preceded this with a chicken sweet corn soup which was hot, thick, nourishing and soothed my wincing stomach.

The food was exquisitely tasty, yet light on the palate. Washed down with complimentary green tea. The perfect recipe to make my tummy feel a lot less upset and hurt.

And the day would only get better as you will soon find out.

As I said before, MLC Bandra, with its excellent and well informed service and memorable food is fast rising in my Hall of Fame. Two write ups in two weeks reflect that. At Rs 340 (7 USD) for the Keong's chicken, it's not the cheapest of options. But then each bite was an example of culinary excellence and gastronomic ecstasy.

I have never tried food in Mainland China but will definitely do it when I make a trip to India...I have heard about their excellent food from quite a few friends.
15 May 2010 at 13:41

Kalyan Karmakar said…
Ha ha like a set batsman getting out to a full toss.

I am quite a Mainland China fan now and have begun to understand the awe that it commands Lazy
15 May 2010 at 14:14

Gaurav said…
Chinese used to be one of my fav meals to dine out on. Of late though it has slowly disappeared from my meals out.
My stomach almost always gets upset and i find myself gravitating towards more complex flavours of Thai and other Asian cuisines.
Still swear by the Oriental Blossom though.
16 May 2010 at 15:14

Scarlett said…
MC is becoming one of my favorite Chinese restaurants as well, and I totally agree - the whole Indian Chinese vs Authentic Chinese debate is pointless. Both are different tastes, catering to different palettes and should be respected. Though MC is not 100% "original" Chinese (and thank God for that!), it still comes closer to authentic Chinese than a 5 Spice or a Bar-B-Q or a Tung Fong! But then, would you compare Mainland China to 5 Spice? I wouldn't!
18 May 2010 at 11:27

Kalyan Karmakar said…
@Gaurav, Oriental Blossom? Where's that? I am quite fond of Thai cuisine. But the hard core fish oil based stuff

@Scarlett: We called in for a hakk a noodles and chilly chicken dry from 5 Spice the other day. The hakka was nice, though ajino moto soaked. The chilly chicken had enough rocket fuel to fuel a B 52
18 May 2010 at 14:06

Anonymous said…
How is the buffet at Mainland China ? I mean , how is it served ?

I heard they bring the various appetizer's to your table i.e you don't get up and go to take them.

But the main dishes and the desset is a spread , which you go and pick up like a regular traditional buffet .