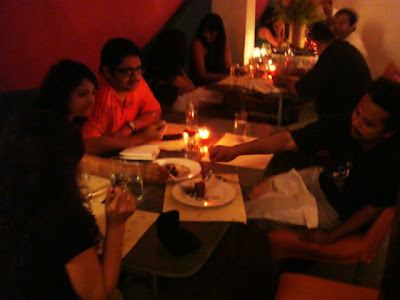 As I wrote in my last post, I was felled by a cold coffee a couple of days back and was down with the runs. So how did my friends respond to my aiments the next day? One nudged me away from curd rice to an amazing lunch at Mainland China, Bandra. Another found time between her birthday to prescribe medicines for me. A third bunch coaxed, cajoled and picked up from home and my intended dal rice dinner to a lovely night out, with Kainaz coming in from out of of town to join us. Amen!

I met up with my group from work for a meeting at Gloria Jean's early in the evening. This included my fellow Ultimate Mocha victim from the previous evening.

I texted back about petulant tummy.

Soon I got a call from another member of the gang. A very concerned voice 'Is the stomach very upset? How about just a soup? We'll come and pick you. No problem if Kainaz is coming late. We'll wait for her".

As I said I was coaxed and cajoled to come out of my shell of daal, rice and darkness and soon we headed to Restaurant 5 at Santa Cruz, Linking Road.

I recently heard that the place was named after the 5 chefs who apparently broke away from Olive to set this up. Well they have done a much better job here than the folks at Olive are doing.

5 has been a favourite of K and me right through our marriage. Whoever I have sent there has liked it wholeheartedly. Most of our gang hadn't gone to Restaurant 5 before. They decided on it as I strongly vouched for it. I hadn't been there for a while myself. I was happy to find out that the cosy and pleasant ambience was the same, as was the menu, the quality of food and the bread basket which I gave my heart to years back. This is one of the best breads available in town. Ironically its complimentary. As they say, 'the best breads in life are free'. 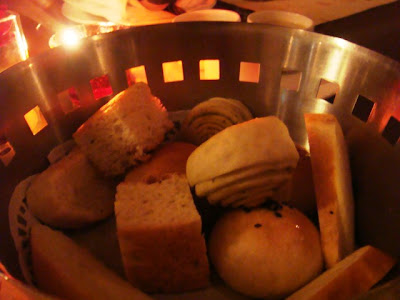 The only dud was the spinach and bacon soup that I had ordered in token reverence to the bugs in my tummy. As Soumik said, 'what could one expect from a spinach (!) soup'? It did have a nice flavour of bacon which came from the bacon bits in it. My grouse was that the soup was lukewarm. I requested them to reheat it. The soup came back steaming but was still cold. A function of the powerful aircon and the broad soup bowl perhaps. Basic Physics at work. 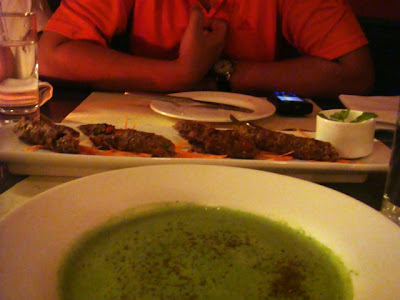 We tried out a lamb and cous cous kebab which made our bellies dance with joy. There was a delectable and flirtatious bite of sharp chillies which was redolent of coquettish Arabian Nights. I had expected a slightly grainer texture to the meat. As Soumik pointed out, the cous cous substituted the gram dal in an Indian shammi kabab in the Mediterranean kebabs here. Which probably explained the smooth consistency of the kebabs. 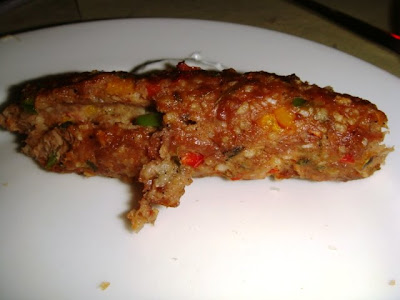 Thankfully the service was slow enough and the others in the group were going really slow too so that Kainaz, who was returning from out of town, could join us in time for the main course.

We ordered a couple of plates of grilled prawns. This is my must order dish here. Three large juicy prawns grilled to perfection with a zesty Mediterranean marinade is my idea of seventh heaven. I always have this when I come to Restaurant 5. In case Happy Fork, my friend, fellow foodie and doctor reads this, let me assure her that I did not eat the prawns last night. I had the herb rice and the magnificent crisp fried okra and tomato which comes on the side. Looking at the others relish the prawns was almost as good as having them myself. 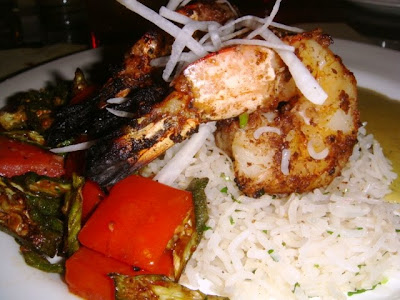 We followed this with a plate of pork chops. These were so delectably flavoured and so wonderfully tender that we immediately asked for seconds. But 'Life is not all ha ha hee hee ho ho' as they say and the kitchen had run out of pork chops. 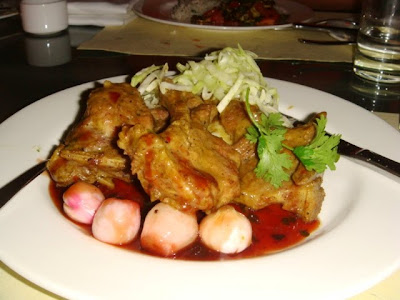 Rahul had suggested a Spaghetti Bolougnaise for a much needed shot of carbs. What came was the BEST Spaghetti Bolougnaise that I have ever had. Even K, who is not a S B fan, kept tucking it in. Keep in mind that she was tired from her trip and not really up to eating. The spaghetti was just right and not overpowering. It formed the base for a very distinguished Bolougnaise sauce. It didn't vie for attention with the meat. Proportion-wise there was more of the meat sauce than the spaghetti. The way God meant it to be. The Bolougnaise sauce was not too sweet or ketchupy. It was dark, deep, erudite and elegant. Reminiscent of th works of Satyajit Ray, the maestro, whom we were discussing over dinner. 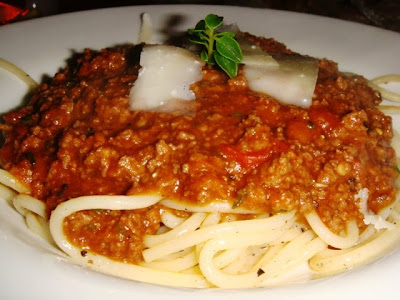 We called for seconds. Weren't denied the sinful pleasures of life this time.

Remember those war journalists who duck bullets, bombs and destruction? Risk their lives to get you photos from the war front? Well that was almost what I had to do get you pictures of the desserts. There were sensuous and seductive chocolate treats in front of us and I had to bear the wrath of a rampaging hoard of chocolate lovers to get the pictures. 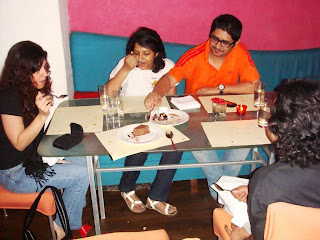 The dark and white chocolate bread pudding warmed the cockles of our heart. It was sweet, nutty, pure, life defining, all consuming...  a bit like one's first love, leaving behind memories long after its over. 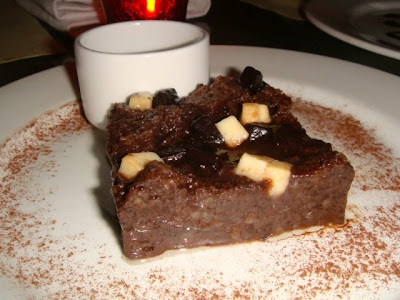 Then there was the chocolate flan. Mousse based with a thin crusty base. Cool, suave, confident and saucy. More a fling than a cloying affair of the heart. We had two of them. Flans, not flings.

This was another all time favourite which I recommended and I was really happy to see the others ask for a repeat. Especially since I was taking photographs while the first lot was wiped off by the rest. 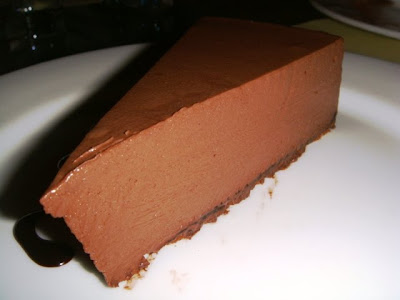 The service is slow which adds up to a lazy non Mumbayish meal. The only fly in the soup was the waiter who would keep hurrying you to order and would keep coming and interrupting you for the next order. Drinks? Starters? Main course? Desserts? Coffees? Give us an effing break dude. Especially when your kitchen staff's going to take a lifetime to get the food after you hustle and  hassle us.

So there you have. My evening. Started of as fated to spend alone with stomach cramps and dal and rice cooked and kept in the fridge waiting quietly for the wife return from her off-site. Magically transformed into an enchanted evening with soul mates and soul food and great conversations. The way life should be.

Thanks guys. Let's catch up soon. 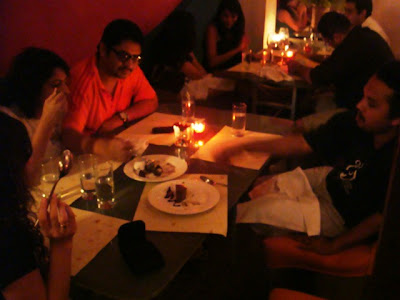 Happy Fork said…
Those prawns looked so divine....I understand what you might have gone through that day!Haha!
16 May 2010 at 19:45

Anonymous said…
hmm, the photographs look so inviting. i am sitting in spice village, thekaddy, kerala tucking in yummy malayali food. should take some snaps and send them to you soon.
17 May 2010 at 00:22

Kalyan Karmakar said…
@Sharmila... I will be there eating for you :0 But get well soon. Would be great to have you back in the kitchen

@Happy Fork, I was a very good boy

BTW, why would you want to order spinach & bacon soup in the first place? Spinach isn't advised on a bad stomach in any case. For future reference :)
17 May 2010 at 12:50

Kalyan Karmakar said…
@Scarlett: Am a white chocolate fan too. In small doses.