'A Cook's Tour' ... To Gurgaon and back with Tony Bourdain

on May 13, 2010
I made a short trip to Delhi today. The food was as atypical of Delhi as possible.

No paapri chaat or daal makhni. Green tea, muesli and fruit yoghurt for breakfast at home. South Indian chicken curry and neer dosa on the Jet flight while going. A post lunch-time meeting lunch at Ruby Tuesday. Smokerhouse burger - described as bacon and cheese. reality:  one piece of bacon hidden somewhere. My boss wisely suggested a beer in the heat over my ice tea. So iced Tuborg it was. 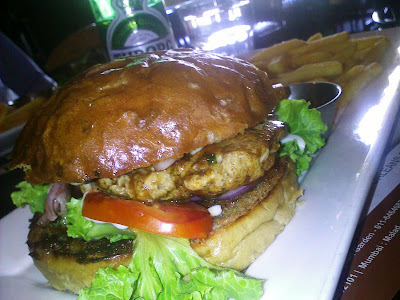 I was floored by the Delhi airport. I hardly travelled within India last year and had not seen the new airport. It was so new age and modern. I almost went to exchange foreign currency out of force of habit. Didn't seem like any airport at home. Not that Mumbai is too bad. Picked up a peach ice tea there. There was a dal makhni in the Jet flight back. But then hey, I went to Gurgaon and not Delhi! Subjected to the forty degree treatment hoping from one air conditioned refuge to another.

I bought Anthony Bourdain's A Cook's Tour recently at the Phoenix Landmark, a fantastic book shop. 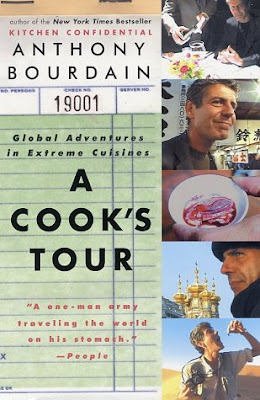 I started reading the book on the flight and was immediately transfixed in the spell of some very powerful writing. Yes, Bourdain writes about food, but such wonderful and vivid imagery, such pure emotions. I chide people who call Tendulkar 'God' saying that they use the word loosely. Well I am very tempted myself in this case.

Bourdain writes about the first taste of oyster which took him towards a career in food. Well Bourdain is clearly the reason why I write. And noone compares to him. The way he brings alive his experiences, the way he connects with you at an intimate personal level through his words, the way he uses self deprecatory humour to bring a smile in the grimmest and bloodiest of situations, the way he makes a food tale seem like a bigger epic than Illiad, the way he goes beyond the conventional.... he is the maestro of food writing and programming.  Light years ahead of the rest. And I have it from my sources that women find him hot.

I was tempted to share excerpts from the book but didn't know what to leave out. Here's one passage where he talks about 'food memories'. Now play this back in your head in Bourdain's characteristic languorous drawl and tell me if it doesn't touch you somewhere:

"Your first taste of champagne on a woman's lips....steak frites when you were in Paris as a teenager with a Eurail pass, you'd blown almost all your dough on hash in Amsterdam, and that slightly chewy steak of rumsteck (rump steak) was the first substantial meal in days... a single wild strawberry, so flavourful that it nearly took your head off... your grandmother's lasagne ...a first sip of stolen ice-cold beer on a hot summer night, hands smelling of crushed fireflies.... leftover pork fried rice, because your girlfriend at the time would always have some in the fridge....steamed clams, dripping with drawn butter from your first family vacation at the Jersey shore... rice pudding from Fort Lee Diner ... bad Cantonese when you were a kid and Chinese was still exotic and wonderful and you still thought fortune cookies were fun... dirty-water hot dogs .... a few beads of caviare, licked off a nipple"

Ooof, where was this when one was searching for passages for elocution in school? 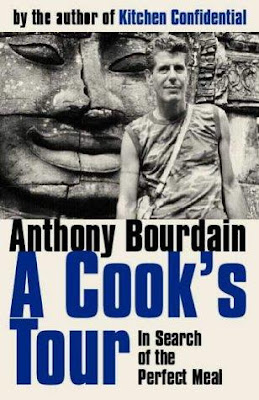 From the hip gobsmacked at Gurgaon

Sharmila said…
I do get to visit Delhi very frequently and love spending evenings gorging on the street food. But I hate inflight meals and often skip it ... recently we got served samosa and chole ... it was all lump of maida and goo of liquid 'gravy'. Yuck.
Love Tony B. :-)
13 May 2010 at 09:01

I've stayed for 5 years in Gurgaon and hated it. How much will one keep going to the malls? Like you, I love Bandra.

And if you have some time visit Galleria - a cute little market place- for D Paul's coffee. It's available at a small food outlet( i forget the name) opposite Le Marche frozen foods. That coffee is an institution in Delhi. The first and only outlet has been in CP for decades ( mom used to have it in college)till they started making it available in Gurgaon and GK on popular demand.

Sharmila, what acoincidence, the option to chicken and neer dosa was chhole samosa
My wife finds A B hot!

@Mumbai Diva, I know, that can be frustating. Only one comment showed.

My plan at Gurgaon is usually not to spend more than 4 hrs there. Was there overnight only once.

I guess I need some life around me. Maybe I am a 'village person'. Ash, I see the merit in living in a palace beside where you live. But then I didn't Dubai either. And I hate wearing a tie or a suit on 40 degrees

Anonymous said…
Bourdain is HOT! His desc. of food is hotter :) Reminds me of Lt. Col. Frank Slade, (Al Pacino) in Scent of a woman..

"Women! What can you say? Who made 'em? God must have been a fuckin' genius. The hair... They say the hair is everything, you know. Have you ever buried your nose in a mountain of curls... just wanted to go to sleep forever? Or lips... and when they touched, yours were like... that first swallow of wine... after you just crossed the desert. Tits. Hoo-ah! Big ones, little ones, nipples staring right out at ya, like secret searchlights. Mmm. Legs. I don't care if they're Greek columns... or secondhand Steinways. What's between 'em... passport to heaven. I need a drink. Yes, Mr Sims, there's only two syllables in this whole wide world worth hearing: pussy. Hah! Are you listenin' to me, son? I'm givin' ya pearls here. "
13 May 2010 at 22:51

The first time I saw Scent of A Woman was at Nandan at Calcutta when i was in college. I was alone. The compound was flooded due to rain. My jeans were drenched. There was no interval.I was so engrossed that I was immune to all discomfort.
15 May 2010 at 03:00