on May 29, 2010
This post is long due. Last night was one of those rare times when I lost the battle to sleep. Thankfully. Sat than for an hour and a half in front of the screen this evening. MTNL braodband wouldn't connect. So back to the Graveyard Shift now. 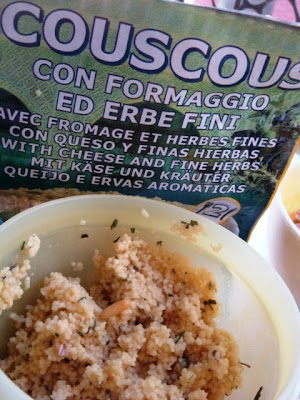 I got the idea of using couscous in my mission to improve my lunch at work. The idea struck me when I was at the Olio Mediterranean workshop and learned that they used packaged couscous to serve in the restaurant. I don't mind cous cous and thought it was worth trying out. If a five star used ready made stuff then why not me? Not that I approved of what I heard. If I am paying good money then I don't want to them take stuff out of a bag, heat it and serve it. But that's another story.

I stepped into Sante the other day. Picked up a pack of Couscous. That's when I met Milanda, the director of Sante, for the first time. We chatted about various things and I asked her if she thought that couscous would work well for an office lunch. She suggested putting vegetables in it and even offered to escort me to the vegetable shop when I said I was herbivorically challenged. My plan was to make the couscous and have it on the side with something. This is the story of what actually followed.

I heated water for my coffee after I woke up. Begun to make the couscous and take some rather early calls from work. The full pack (Rs 120/ 2.2 USD) of couscous was supposed to serve 2. So I used half. Put half the mix in a lunch container. Heated water in the micro and poured it over the couscous. Just a couple of cm above the couscous. Added half a teaspoon of olive oil as directed. I waited for about 5 minutes as the preserved couscous began to form. I made my coffee. That's when it all came to me. 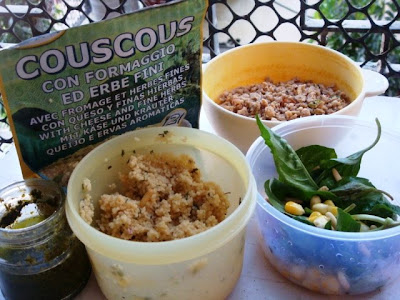 I took out the sauteed chicken mince from the fridge, heated it for a minute, and added it to the cous cous. Same quantity. About 100 g. I then added a bit of boiled sweet corn and a few basil leaves from last night's liver salad base. About two tablespoons of chopped feta. A few pine nuts. As an after thought, half a finely chopped tomato. And, as another afterthought, a couple of teaspoons of pesto mix which they gave us at Olio. I soon left for work. Couldn't wait for lunch time. 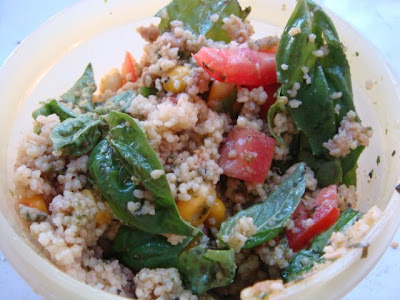 Turned out to be a wonderful office lunch. It was everything I want in an office lunch. Tasty. Different. Light on the stomach. Not oily. Subtle spices. Not a overdose of masala. It had a nice texture. Was not gelatinous. Fast to make. Coffee was ready before I begun mixing it all. Was hot even when the lunch was packed and tucked in. 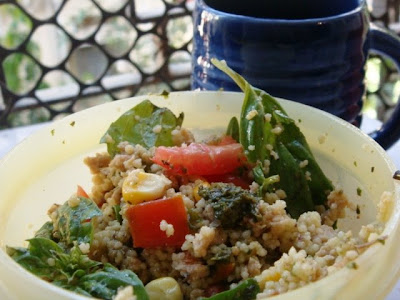 Caveat:. This is quite filling and difficult to finish by one person. I had the company of two lovely ladies, colleagues and food lovers who helped me finish it. I have named it Goatherd's Salad as I felt it was quite Moroccan in theme and in a way we did take goatherd-like break in the middle of the day to have this.

I quite liked the salad and made it again the next day. Couldn't finish it as I ate it in the car on the way to a meeting. Alone.  Had the remaining in the evening. Turned out a bit soggy today. Water was a bit too much. Plus was multi tasking and added half a cup of green tea instead of water! Thankfully that didn't mar things. So remember to be miserly with water. It's a dessert dish after all. 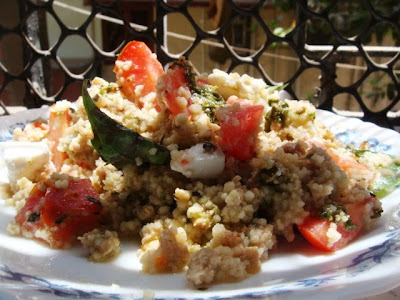 I was quite encouraged by my overall Couscous experience. Was further intrigued and enthused by the Sunayana's comment on the Finely Chopped Facebook page.

I make cous cous for lunch very often... one of the versatile dishes that can go with anything and very easy to make... try with chicken curry... sauteed shrimp &/ sausage... veggies... and even yogurt or Tzatziki... chickpeas with spinach, bell pepper, sundried tomatoes and parsley... anything really.
Yes, I plan to toss up more stuff with cous cous after reading this.
I often refer to Banu as my 'Sous Chef' '. I have taught her a number of Bengali dishes. Plus she often helps put together the base for the stuff I cook. Most of these dishes are alien to her. She doesn't know the names. Alu posto is 'khus khus wala alu'. Rui kaali is 'kanda wala machhi'. You get the drift.


Well this is what Anthony Bourdain writes about his Sous Chef in 'A Cook's Tour' after the latter joins a cooking school:


"A newly enrolled student in the French Culinary Institute.... he's learning where all the French food he's been making brilliantly for years really comes from - any why. Eddie knows how to make a gastrite, he just didn't know what to call that. I wish I could watch him in class, when they show him glacage or how to make a liaison, or explain the principles of deglacier. He'll say, 'oh that'! No problem. Same like for the ravioli at Les Halles"

Trivia: The picture below is of a cous cous that I had at Istanbul 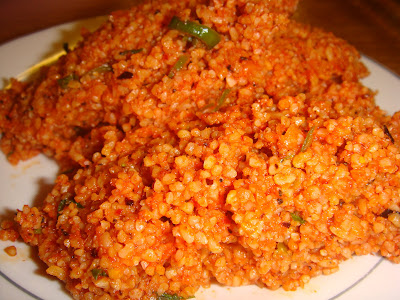 Sharmila said…
I still have some fresh basil and chicken mince left and still yet to try couscous ... after seeing your dish looks like it is about time. :-)
Hope your bad back is good now .. and you have not forgotten your way to Kichu Khon. ;-)
29 May 2010 at 10:40

Kalyan Karmakar said…
Hey Sharmia, back was better from next day. of course I haven't forgotten my way. Was there when you had put the wonderful pictures of your neighbours :)
29 May 2010 at 10:44

Lazy Pineapple said…
Though I am not a fan of cous cous..your recipe sounds really delicious...

Jaya M said…
Kalyan,
I like cous-cous too, it's very light on stomach as you mentioned.I even like to make it as upma, if you wish you can check the recipe on my site.I even like it with milk, kind of payesh.I do think the texture is very similar to"Dalia" that is so popular in India,the only difference is it's very quick to fix/make.Your recipe with mince is a grat idea.
29 May 2010 at 13:44

Kalyan Karmakar said…
@Lazy, the kheema and corn ensured that the cous cous blended in

Fat loss Tips for Lazy said…
This is wrong, you make us want that food by providing such tempting pictures. And we have to leave our computers to try and cook something similar.
:)
29 May 2010 at 20:17

Unknown said…
Banu is getting well trained. When she is out in the market again, I sure she will sell her skills well. I hope she mentions all your training on her resume. ;-P
30 May 2010 at 04:26

Scarlett said…
Not a big fan of cous cous or falafel though I love Mediterranean & Lebanese cuisine.
31 May 2010 at 12:17

@Pinku: Visual appeal always is a plus with food

@Pree: Capitalist exploter that I am, I have tried not to let out the final formulae