My recent initiation to Maharashtrian restaurants started when Happy Fork took us to Purepur Kolhapur. Then I had some lovely stuff from Diva Maharashtracha at Vandy and Manish's. A few days back Happy Fork proposed to take us to Malvan after Kohapur. Well it almost seemed likethat as we reached somewhere close to Borivli National Park at the other end of Mumbai. Happy Fork, her cousin Rahul, Soumik and me circled the restaurant Pangat. 'Pangat' means a group of people getting together and eating together on a festive occasion such as a wedding. Our table at Pangat was quite festive too on Saturday as we ate and ate and ate ... 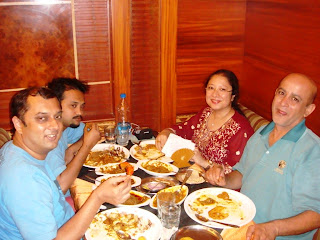 Pangat has an AC and a non AC section. The AC section is strongly recommended if you want to eat half the menu. Keep in mind that the food is fairly spicy. The first couple of pages of the menu has Malavani and Konkani dishes before it degenerates in faux Punjabi and 'Chinese.' 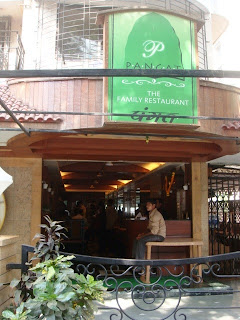 Pangat's not for you if you like a fancy restaurant ambience with food which is aesthetically plated. Most of the Malvani gravies here looked the same. Please don't loose your patience with the pictures in this post. The food was not very photogenic. It was very palate friendly though. That's what finally counts after all.

I found the picture which Happy Fork took of fellow food commando, Soumik, and me revealing. Is this how people feel as they wait to eat while I click pictures? Don't feel too sorry for him. He snatched a Vade while I clicked and did out last us at the end. The big smile is interesting. It takes a lot for another cuisine to impress a Bengali after all. 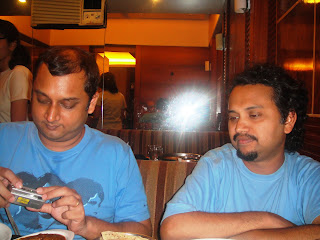 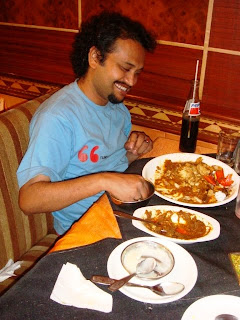 Rahul pointed out that there were subtle differences in the dishes based on the proportion of wet and dry coconut pastes. Rahul was quite a food raconteur and regaled us with tales of dhaabas where you select your chicken for dinner, which is then half cooked and got to you for a feedback on final spice levels. And of farmhouses where entire goats areroasted. Of skewers with mixed meat on them. And some stories which could get us into trouble if mentioned in the open. Rahul's tales were almost as exotic as the food which followed. 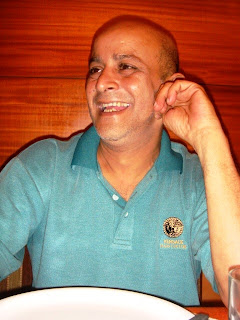 The most memorable dish in this seafood place was the mutton sukha! This was really really tender. It was soft, cuddly. I fell in love with it. Quite carnal actually but then this is not an adult blog so I better restrain myself. Needless to say it was the most succulent cut of mutton that I have had in a few centuries. There were loads of meat nestled in the masala. Not visible in the photo though. 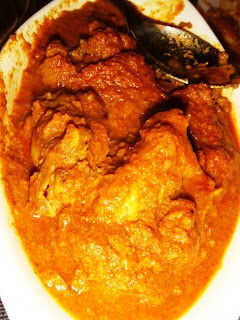 The liver masala was a study in contrast as the meat was scrunchy and naughty. The two gravies looked similar but tasted different as Rahul had promised.

My heart went out to the shell fish. I loved pulling out the little whorls of meat and enjoying their refreshingly juicy bites. 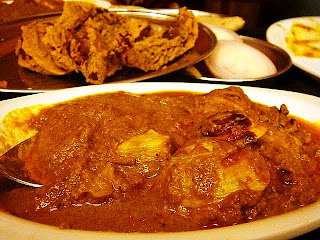 The oysters were in a world very far from the raw oyster buckets of France or Maine. These were little oysters cooked in another heavy masala. The oyster formed a base on which the masala launched itself into your system. Particularly good for those who find the taste of raw oysters too much to stomach. The fact remains that eating oysters make one feel very majestic. Even if in a small restaurant in the outer reaches of Mumbai. 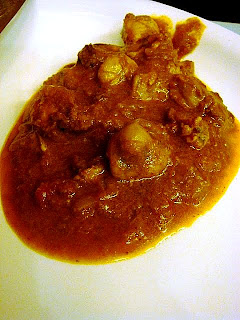 The crabs were not shelled. Our attempts to get crab crackers were met with puzzled expressions by the young boys (verging on child labour) who tended the tables. So we went out about it the way our ancestors would. The crab shell cracked easily when bitten and broke open to reveal a treasure of luscious white meat. This combined very well with the angry red, spicy gravy that it swam in. Much better than the overrated Singapore Chilly Crab. 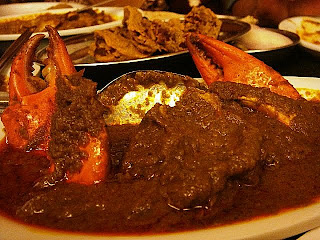 I rarely go for mackerel but was very pleased with the one here. The masala paste had infused nicely into the fish and the result was a very well flavoured fry. I don't know whether the season was wrong but I have had better Bombay duck before though. 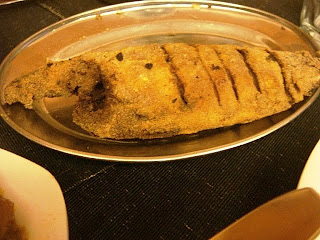 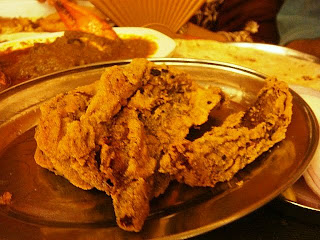 I have had baby shark before. The meat is normally squishy and over powered by masala in local preaprations. The same happened here. But still I always consider eating sharks as payback time for the Great White which scared the hell out of me when I saw Jaws as a five year old in Iran. I had asked my mom to cover my eyes and tell me when they were not showing the sea or the beach. Which was pretty much never. 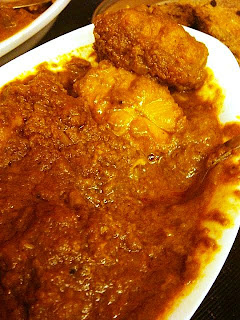 We had vade (thick Maharashtrian fried puris) and chapatis on the side. I went for the chapatis as the main courses were quite heavy in any case. Vade would fill precious tummy space in my opinion. 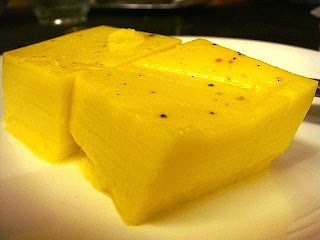 We ordered another local dessert, Shreekhand. The shreekhand here was fluffy, warm, sweet, but not excessively sweet or clingy. It was apparently warm as it was freshly made. A rare privilege in a city where frozen, packaged Shrikhands dominates today. This alone made the trip to Borivli worth it. 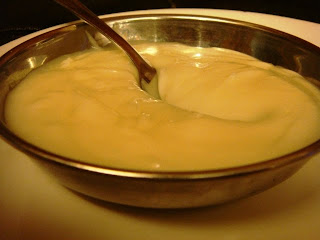 Thanks Happy Fork for the wonderful pre birthday treat and for another amazing insight into Maharashtrian cuisine. Wish you have many happy returns in advance for 14th May. And hope we feature in more of your celebrations.
Malvani Mumbai highs Mumbai local People pisces

Anonymous said…
I am now almost vegetarian but while reading and watching your post I guess I will be non-veg. again.
Thanks to you? Ha Ha ha
Anyways, Pangat will visit for sure.
Thanks for sharing And the best is you translated the meaning of "Pangat". Very nice. Cheers.
11 May 2010 at 10:17

Scarlett said…
The food looks mouth-watering. Even though I'm not a fan of sea food. Isn't it illegal to kill sharks though? Poor baby shark!
11 May 2010 at 11:39

Kalyan Karmakar said…
@Hobo, thanks for writing in. After lasy night's left over 5 Spice chilly chicken dinner even I feel like turning vegetarian.

Happy Fork told me the meaning of Pangat. Another Maharashtrian friend told me the same when he heard I had gone there.

Lazy Pineapple said…
yummy..though baby shark is not something I would ever go for....poor babies :P

This is first time I have read someone calling a mutton dish 'Cuddly' heheh....

Moonshine said…
I tried shark once.. a non indan preparation.. it was a shark soup i think!!!! I couldnt really understand the taste... the smell of the other sea food in the soup was overpowering!!!!
11 May 2010 at 22:15

SarahKate said…
Some of the best food in the world is palate friendly but not photo friendly! Your meal sounds delicious!
12 May 2010 at 01:57

Kalyan Karmakar said…
@Scarlett: Baby shark's a part of local Maharashtrian fare. Must be some variant

@Lazy: Actually I had a Maharashtrian starlet of the late nineties in mind. But refrained keeping the family audience in mind ;)

@Moonshine, shark fin soup is quite popular in the orient. I had it in Singapore this time

Happy Fork said…
Thanks Knife! It's always fun to have food with those that love it as much as you do!
Pangat is also a term when people of all walks and strata of life sit down in a line in a Gurdwara for Langar,known to be delicious
15 May 2010 at 10:03

Chinmai said…
You had pretty much everything on the menu there :P
Glad to know that you had the Kharvas as well...only thing missing from your table was the solkadi which is alo pretty good here..
But yes the best vade and kharvas is to be had at pangat
13 April 2011 at 16:34