The milk of human kindness: Pomfret in a Sleepy Coastal Coconut Milk Sauce

on May 17, 2010
Remember the fish I bought on Sunday? Kainaz's brief to me was non spicy and not 'hot'. I made doi posto eelish. Which, as Spice and More commented, is different from the West Coast and Goan way of cooking. Well I actually directed Banu to make the pomfret for dinner in a 'West Coast' manner. 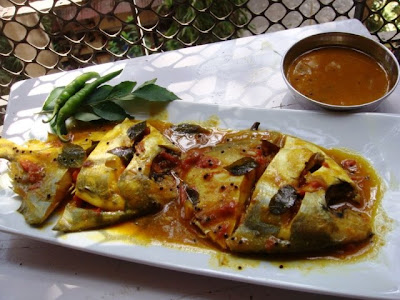 I am using very broad brush strokes here but some of the key differences in the Bengali and Goan schools of cooking fish are as follows:

There are complexities beyond this I am sure but the above captures the key differences.

So here's how we made the pomfret. Can't think of an easier recipe than this to cook fish:


The result was a soft, sleepy sauce with fresh pomfret. I am sure that the Bard had coconut milk in mind when he spoke of the 'milk of human kindness'.

They eat fish with rotis in the West Coast. In the East it has to be rice. Fish curry is followed by a nice snooze at both sides of the country. 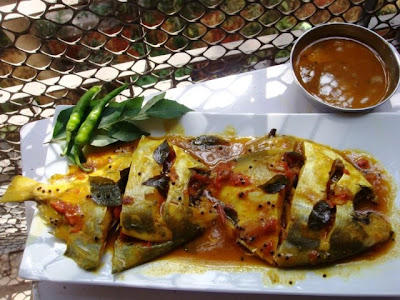 Lazy Pineapple said…
slurrrrp...Pomfret is one of my favourite fish...I miss it so much....

I had just lived on this fish alone during my honeymoon to Ganapatipule in Konkan :)

Scarlett said…
Your fish looks so delicious, I want to eat it right off your blog! Even though I'm not a fish lover!!

And I have to say this - I would like to encourage you at your attempts at food fiction, but you're SO SO much better with the real stuff :))

@Lazy: could pomfrets be the oysters of honeymooning couples in the West Coast :)

@Ash: Well I guess I was as brutal with the fish :) But seriously, thanks. I am completely tripping on Bourdain's ' A Cook's Tour' right now. Non fiction

Pomfret has no bones so go ahead

wanderer said…
Ok OK...I confess I had just glanced through your blogs.

And all I will say at the moment, amar eka ranna ghor dorkar...ami ei sob raana korte chai chai chai....If in case you dont understand bengali I can tranlate my exasperation into english.

Can completely empathise with what you say. I used to live in a vegetarian PG at Mumbai. Truly begun to feel home only after I got my first rannaghor (Kitchen)
18 May 2010 at 16:17

Dew said…
Sounds interesting, shall try someday making this. Looking at ur header ...its so tempting, you know I try and make rohu fish with Postu...very simple..like alu posto :), lots of green chillies & cooked in mustard oil... It tastes yum wid sheddho bhaat!!
18 May 2010 at 22:49