The morning after ... Yellow Tree, Bandra

on May 01, 2010
Remember those cowboy films where the good guy and the bad guy, or the good guy and the sultry lass, would challenge themselves to a drinking dare? Who gets knocked out first? Well you would be well advised to not try it with Yellow Tree's Long Island Ice Tea. It's clearly the most potent LIIT around. But I am getting ahead of the plot. 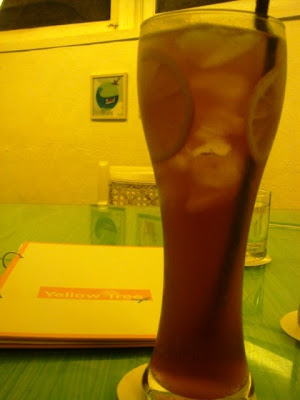 Yellow Tree was one of our stops when we went in search for a table for dinner in Bandra last Saturday. We didn't get a place. I cracked the formula for getting a table on a Friday night. Go after 11 PM. With one person instead of three. Your odds improve.

Yellow Tree is a newish place at Bandra's Ambedkar Road. It's quite an interesting restaurant with four sections. A little sit out when you enter. Too hot right now but works for smokers. Then there is a cheerful indoor section downstairs. We sat there. Pastel yellows and blues, Goldilockish simple wooden chairs and tabes. Bars stools. The look reminded me of Just Around the Corner. As K said, this was 'our kind of place'.There was a chirpy cafe like feel to the place. A section for newspaper and magazines. Interesting food books inside. We flipped through the 'French Laundry Cook Book' and ooh'd and aah'd at the delicious pictures inside it.

They have another dining section on the first floor and a sort of lounge bar on the second. I remember thinking that we were the only people above 18 there when we were there looking for an elusive table last Friday.

Yellow Tree has a well equipped bar and a continental menu with a mix of soups, sandwiches, entrées, desserts and coffees.The folks that one saw in the restaurant section was the usual Bandra crowd, languorous, dressed down, stretched out, relaxed. 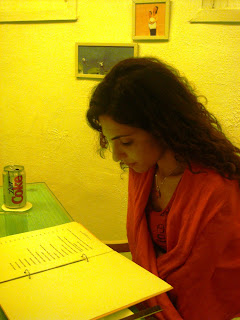 We tried a smoked salmon bruschetta. Both Kainaz and I are big smoked salmon fans and looked up from the menu card in unison, united in our love for the pink ecstacy. The smoked salmon bruschetta here was a rare delight. We have had some nice and exotic starters recently at Del Italia and Cafe Mangii. Works of art but they left you asking for more. Specially if you tried sharing it between two people. No such problems at Yellow Tree. The bruschettas were abundant. Covered generously with a thick layer of finely chopped, well seasoned, fresh smoked salmon. No half measures, they were quite generous with the salmon. We were left with the satisfied feeling of having bought a plush, sink in as you walk, Turkish carpet from the Grand Bazar of Istanbul. This was sheer opulence. 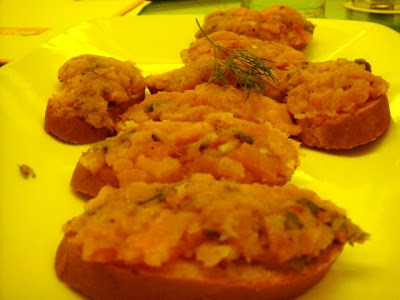 The service here was fairly good. A reassuring trend that I have seen at a few restaurants off late. Nothing ticks me off than waiters or mangers who don't know their own menu. That was from what the case was at Yellow Tree.

There were a couple of young guys taking the orders. Casually dressed. I don't know if they owned the place or managed the place. But they were able to answer our questions adequately. I was eyeing a chicken stuffed with cous cous and arugula for dinner. I had no idea what arugula was. The person taking the order told me that it is a lettuce like leaf. On further questioning he told me that the chicken would be in the form a breast steak. Not my favourite cut of meat. The dish sounded too healthy for me and I didn't order it finally.

I ordered a risotto with chorizo and olives instead. Now here's the thing. I have rarely come across a risotto that I have liked. As K said yesterday, what's there not to like. After all it has my favourite ingredients ... rice, cheese, butter. Yet, it's a bigger mystery than  the Bemuda triangle. The combination normally just doesn't work for me. Still I decided to try my luck here. Chorizo being the tempting factor. 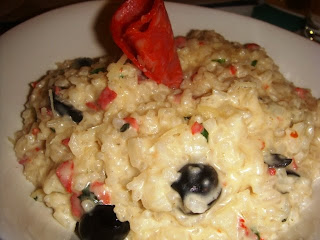 Well, the risotto at Yellow Tree turned out to be one of the best that I have ever had. It was reassuringly hot and soothing. A perfect ending to a week where I have lived with a sore throat. And a day which began with my presenting at a conference. Surprise, surprise, the risotto was actually tasty. It wasn't bland. And there was a nice bouquet of salt and cheese which tingled my palate. It was too much for me though. I gave up after a while and pecked at the bits of chorizo and left the olives behind.

K had a pan seared tilapia. The dish was plated quite enticingly. She really enjoyed it. I had a bite. The sauce was fairly interesting and had a lot of depth of character. The fish was just right. Not chunky. Not chewy. Had a nice spring to it. Creditable given the hot weather. The dish came with potato fritters. A combination which won K over. 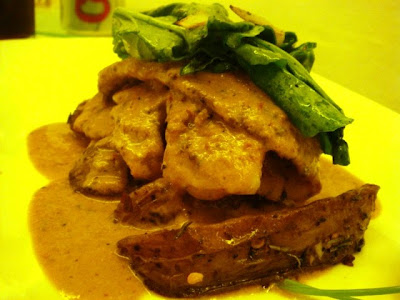 We didn't try any desserts. I saw someone having a chocolate pastry in the next table. But there was a reason why we didn't have any.

Which brings me to the Long Island Ice Tea. LIIT is a favoured cocktail of mine while dining out. I would occasionally order a Vodka Martini 'shaken not stirred' earlier. Realised that the thrill for me ended after placing the order. Vodka Martini could work for Bond. But LIIT works for this Bong. 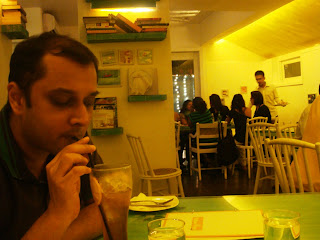 They had made a pleasant tasting LIIT at Yellow Tree. A Honey Trap as I later realised. I finished my glass. Felt good that the weekend was beginning. That we just had a short trip back home after dinner. That I had left the car behind so didn't have to drive back. And asked for another glass.

Now I should have realised what was happening by the careful way in which I e-n-u-n-c-i-a-t-e-d my request. The first LIIT hit me in the two minutes that they took to get the next glass. I knew that it was time to surrender. Had just sip of the glass that followed and took refuge in the more docile and matronly risotto.

We finished dinner with a very satisfied feeling. And, in case, you are wondering, that's because the food was really good. So no wise cracks please.

I had mentioned the service before? The guy who took our order (in the white shirt in the photo) rushed out behind us when we stepped out. He pointed out that we hadn't finished the LIIT and wanted to know if anything was wrong. We said it was fine and that I had realised that I had over ordered. He very earnestly offered to 'pack' it for me! I declined. He still persevered and said that he could give it to my in a takeaway glass! I thanked him and refused. I'd rather restrict myself to takeaway cappuccinos. But must say that K and I were both touched by his sentiment. He didn't have to have to done this.

Something tells me that we will go back to Yellow Tree. Too think that we had twice changed our plans about going there before. But as they say, there is a time for everything. 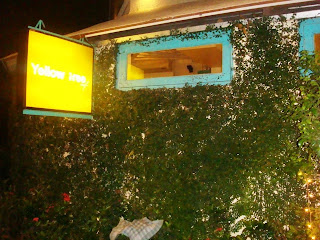 Sharmila said…
Most places shut down after 11pm here except for the high end hotels' 24 hrs open cafes. So much for a good night out. And now I know why I have not got around to writing reviews of food places yet ... along with good food good people serving us are very hard to come by. :-)
2 May 2010 at 08:35

Lazy Pineapple said…
smoked salmon is my favourite too...this looks like my kinda place. Have never tries LIIT..will give it a shot soon :)

Samil said…
Congratulations kalyan. I read a piece on food blogs in the crest edition of Times of india on Saturday 01, may. There in the prime spot was a mention and write up on your blog. Great. Warm regards, Samil
3 May 2010 at 11:14

Kalyan Karmakar said…
@Sharmila, Mumbai reallly spoilt me for other cities. It is perpetually awake.

Unintelligent service really ticks me off.

@Lazy, I wonder if LIIT is a more 'feminine' drink. Cocktails as a genre are I guess. But LIIT is good paisa vasool. In this case too good ;)

@Scarlett, this was more JATC than Bagel Shop, scale-wise.

Anonymous said…
their chicken stuffed with couscous and arugula is awesome!!
4 February 2011 at 04:35