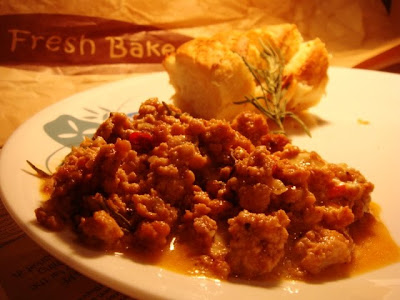 My stand on following recipes is pretty clear. I don’t follow them. At the most look at them for some basic guidance if I want to make a specific dish. I need spontaneity and freedom in what I do. Following a set of directions, laid down by someone else, with no margin for deviation doesn’t work for me in the kitchen. Or in life.


This dish is a good argument in favour of following your instincts. You never know what would come out of the pot. And often it could be a pleasant surprise.


I have been on this drive to improve the quality of the lunch I get to work. Part of which involves trying to get our maid and my sous chef, Banu, to think beyond Indian food.


So when she phoned me at work for cooking instructions, I told her to take 500 g of chicken mince from the fridge and thaw it. Saute one finely chopped onion in olive oil in a pan, ad some ginger and garlic paste (her suggestion actually), two tablespoons of ketchup and then add the mince meat and sauté it. I asked her to add salt, crushed pepper, 2 split bird’s eye chillies and half a cup of skimmed milk and cook it till the mince or kheema dried. I asked her to keep it a bit saucy and thick if possible.

I didn’t know what the end result would be as it was an experiment. My plan was to add some fresh basil and crushed cheese to this and have it with bread for dinner. And toss it in pasta for lunch.

I reached home in the evening, opened the fridge, anxious to see the end result. What she made turned out to be a nice, dryish, cutlet/ chop stuffing. The addition of milk ensured that the meat was juicy and not too dry as chicken mince often becomes. It had potential. But needed mentoring and nurturing.

I went to the gym and let my mind wander as I did the leg routine. Who invented squats? That person should be shot. And I don’t even use any weights. Nebulous thoughts begun to crystalise as I did various ballet steps. As I plonked down on various machines at the gym and refused to get up when the trainer said that I had rested enough. I need to nap between exercise routines. If only the size zero aspirants knew what was going on in my head. Would have added more kilos than what they were trying to lose.

I went to Candies after the gym and picked up a lovely garlic bread. And then to Pali Market for the other stuff. This is what I eventually did with the mince base. 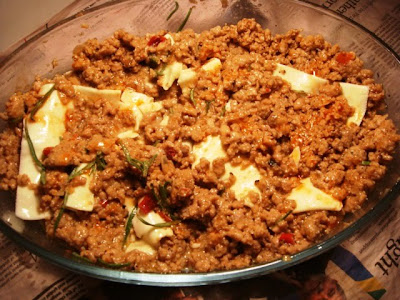 I took a micro bowl and greased it with a tablespoon of olive oil and half a cup of skimmed milk. I added the 500 g of sautéed mince on it. I then took 3 slices of slim cheese and layered it through the meat. Added a zesty dash of Tabasco Sauce. And two sprigs of fresh rosemary. I chose rosemary over basil as the former’s a stronger herb and is used to season red meat. I wanted my chicken mince to turn out to be robust too.


I took the bowl and put it in the micro and switched it on for 5 minutes. I let it stand (kept it in) for 2,3 minutes more and took it out.


The end result was nice and creamy. Very different from the stringy chicken kheema dishes that we end up with at home. The rosemary gave it a nice woody, nutty, strong and distinguished flavour reminiscent of a much redder cut of meat than pale and healthy poultry.


The dish had white meat, slim milk, slim cheese and olive oil. Healthy according to the flavour of the day.

One caveat though. Rosemary is a very strong herb and not everyone would like it. Check out your own tolerance levels and err at the end of being thrifty. 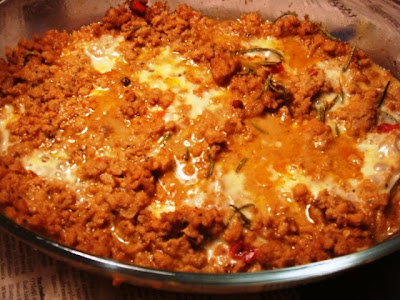 We had the Rosemary Crème Mince with the lovely, soft, exceedingly well flavoured garlic bread for dinner. I had some for breakfast too. 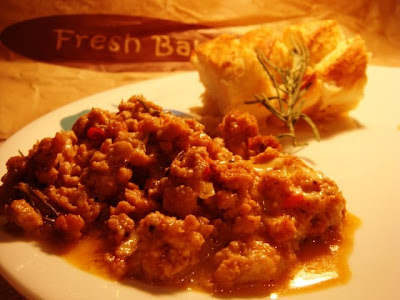 I tossed some of the meat in olive oil (as Kainaz taught us) and boiled pasta and took it for a very elegant lunch at work. 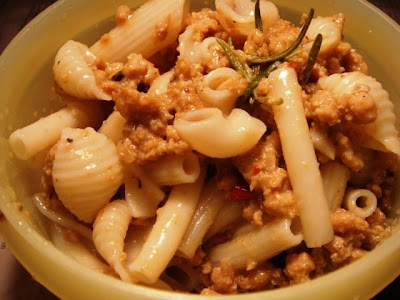 Conti From the hip Recipes

Kalyan Karmakar said…
@Sacrlett: do you have left over pizza pack pouches. Bung in a sachet of oregano from there. Basil if you have it otherwise. Or pudina
21 May 2010 at 17:17