'A Perfect Bite' of pork and a magical evening at Rushina's

on May 09, 2010
My friend, Rushina, would pull my ears if I referred to her as a 'celebrity chef'. She writes books, writes in the press, is quoted in the press, consults a leading food retail chain, a gelato chain and various other players, blogs on food at A Perfect Bite, has her own company and the list of accomplishments go on. A foodie who has lived her dream. Without doubt the most famous person I know in the world of food.

I was expectedly excited when Rushina told me about her plans to throw a pork themed party. Centred around some sausages that she got from Singapore and Naga dishes which would be rustled up by Theyie of the Perfect Bite Team. I have been learning a lot about the cuisine of Nagaland through Theyie's writings at A Perfect Bite. My appetite was whetted by what I read and I wanted to taste more. It's a pity that we know stuff about cuisines from across the world and yet there is so much to discover about our own country.

(That's Rushina in blue and Theyie in grey in the photo below with all the fantastic food that they cooked for us. ) 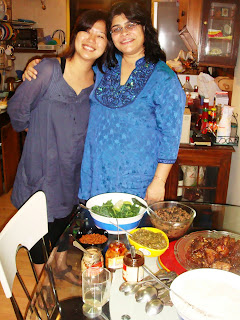 The dinner was everything that I expected. And more. Exotic. Sophisticated. Unique. Memorable. Full of discoveries. A dinner which the two ladies had really slaved over to create magic. Ably supported by S, who doesn't want his cover blown, but was a great host, great company, and a true devotee of food. A spread which made the long trip really worth it.

So here's some of what we ate.

Singaporean Rojak salad 'a la Rushina': where she took the salad base, used local produce and created a refreshingly crunchy, light summer bite 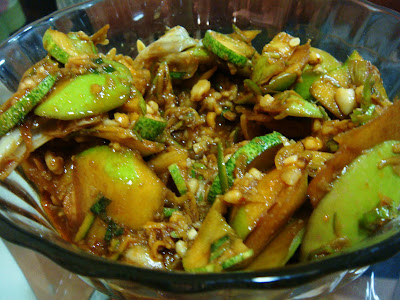 Next we had Chinese sausages which Rushina stir fried with broccoli. I remember Chinese sausages as being very sweet. Rushina's interpretation of the dish gave it a tantalising tanginess which made it far more enticing than the plain stuff. She did seem a bit agitated when she saw Kirti of Feastguru and me rescue the sausages from the broccoli. Boys will be boys. 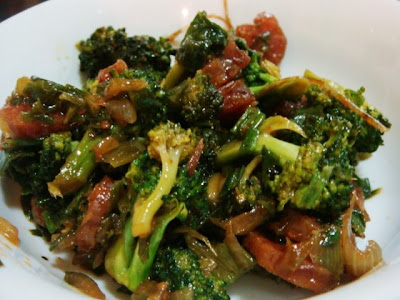 She's also tossed up 'English' chicken sausages with condiments which were so tasty and juicy that they were snapped up before I took out the camera.I sat in a corner and munched on a spread of olives and feta cheese. Feeling a bit overwhelmed to be in Rushina's kitchen where she cooks all the enchanted dishes that she writes about.

Rushina had rusted up an Oriental dish with tofu and fungus. S quickly established through a vote that real men don't eat tofu. As for fungus, as I said, 'how will you know when it catches fungus?' The silly jokes done, I had a serving. It was so delicious that I took a second serving while the pork patienty waited. The tofu had a lovely consistency and the the fungus hardly seemed vegetarian as it had a lovely rubbery bite. The sauce was quite divine and I could heard a Chinese gong prayer ring in appreciation with every mouthful. 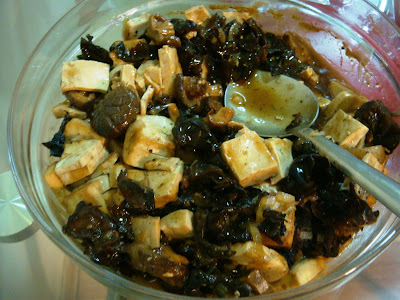 Theyie made a quintessential Naga dish of Kerher beans with local ferns. Again a vegetarian dish which I took a second serving of. This dish from the Far East of India defined comfort food to me. It had a nice warm feeling to it which lifted your soul and made you feel loved and cared for. Mother's day was around the corner after all. 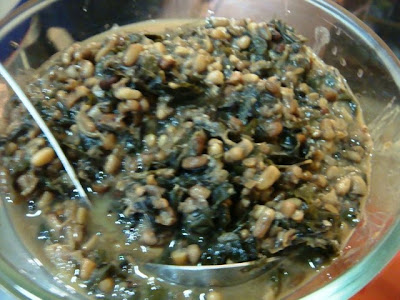 Then came the condiments Theyie's Naga Axone base. A traditional lady's finger and chive based Naga dish. Not as spicy as she threatened it to be. Then there was Rushina's own patented chilly paste and a few other pickles from all over. There was a Squash Leaf based boiled Naga taste breaker to help those who couldn't handle the heat in the food. 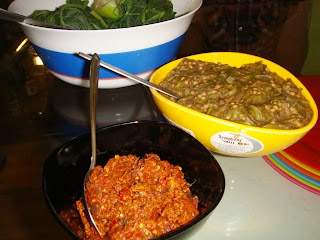 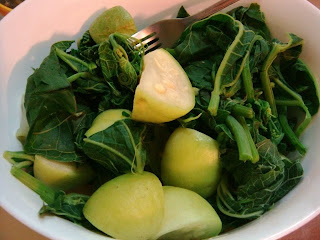 Which, drum roll, brings me to next star of the night, Naga Pork with bamboo shoots. As Theyie said, 'you eat dal and rice in the rest of India. In Nagaland we eat pork and bamboo shoots'. The dish was as sinful as the Celestial Devdasis of yore. Wicked, alluring and tempting. A dish which had me transfixed to the dinner table, seeking out the saturated fat, oblivious to all around. I was in love. A dish which almost made me break into a song of joy and longing. 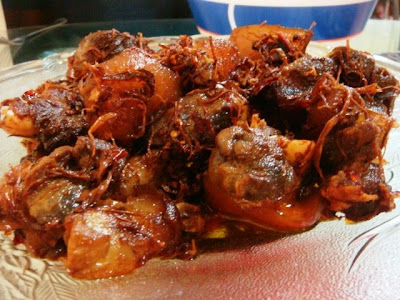 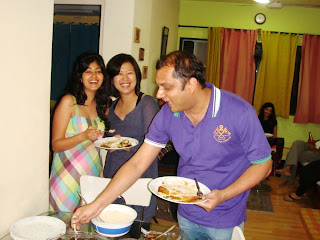 The dessert spread was more elegant than even that of a seventeen star hotel. One has always heard of Mascarpone Cheese. Last night was a dream come true as Rushina created magic with assorted tarts filled with green peppercorn and gari and Mascarpone topped with melon and Kaffr Lime marmalade! Marie Antoinette would have approved. This was the high life. The way the jet set ended their meals. The ending we could normally only dream about. 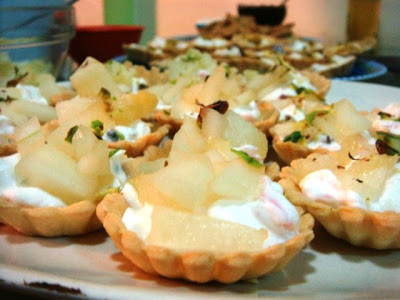 Just when I thought things couldn't get better I had some of Rushina's organic strawberry jam with biscotti and mascarpone. Strawberry is my favourite favour in jams but Rushina's jam was something else. An explosion of sweet and sour and the freshness of the passionate red berries. A fitting finale to a grand banquet put together by two amazing cooks. I felt blessed. 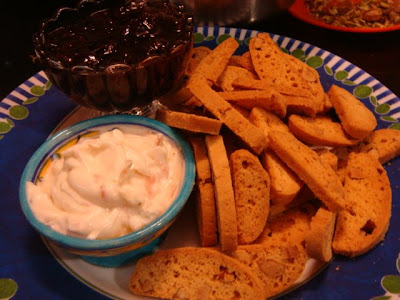 It took a lot to tear ourselves from an amazing evening of conversations, tales and tall tales, food stories, food photography and music. Nothing like A Perfect Bite Dinner. Thanks Rushina, Theyie and, of course, S. 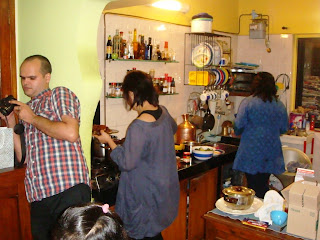 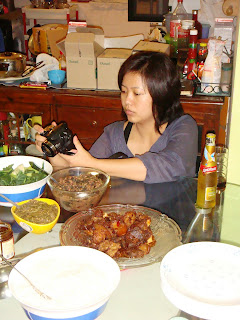 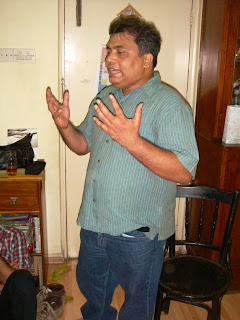 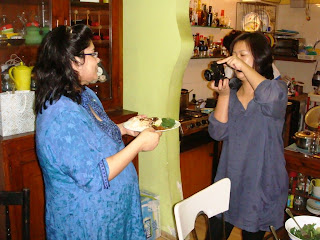 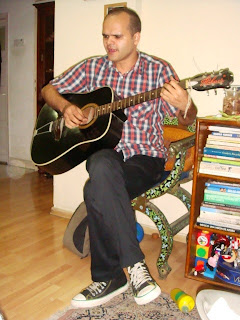 Lazy Pineapple said…
All the dishes look yum...and the descriptions were damn good. Loved your post.
9 May 2010 at 14:25