Summer Siesta: Doi Posto Eelish for our Band of Hundred

on May 17, 2010
My Sunday morning was beginning to look very dark thanks to an inexorable wait at the bank. I lost my cool at one pm, walked off, picked some eggs and bread and made myself some fantastic French Toast for breakfast topped with Australian Cheddar which Spice and More had given me. I then headed to Pushpa's. Picked some great Hilsa, Pomfret and Parshe (for my in laws) and could sense my frazzled nerves beginning to soothe. K's brief to me was to make something which was not hot at all. I began to hear the clouds part and the birds chirp as I thought up of recipes, executed them with Banu's help and took the first bite of lunch.

Here's what we had for lunch. Hilsa cooked in a light, cool, heady poppy base, tempered with a bit of yoghurt. The inspiration for dish came from the posto eelish that I earlier ate at Oh Calcutta's River water festival. And Nilakshi's method for cooking the rohu based doi maachh. 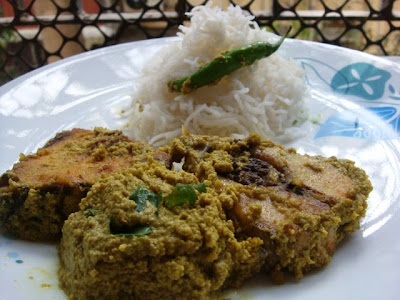 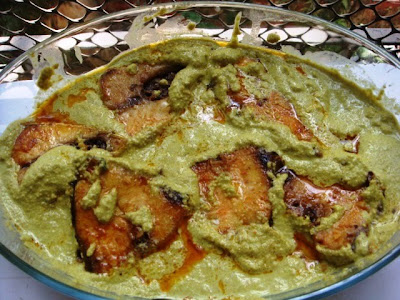 Eat this with steamed rice. But only when you know that you can follow it with a nap. You can eat it with a bite of green chilly. Wicked. You could choose to not fry the fish and just steam it. I reckon that you will  need eight instead of four minutes then.

Both K and I loved the dish. Pushpa's fish was fresh as usual. The paste was soothing and pleasant, very well flavoured. Ethereal. Danced gently in your mouth. As if swaying to soft, melodious Rabindra Sangeet. 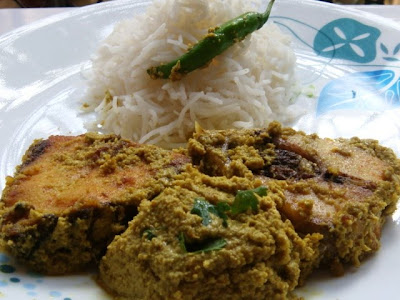 Now for some good news. Finely Chopped Blog got its hundredth follower. Two years, eighth months after we started. Thanks to each of you who have been there supporting me. Would have stopped two years seventh months back otherwise. Check out the Finely Chopped Facebook Page for more lively updates.
Bengali food pisces Recipes

Unknown said…
When it comes to Iilish, I always stick to the traditional. But your recipe surprises and tempts me all at the same time. I am going to try making this next time we get iilish from the Bangladeshi store.

spice and more said…
Gosh that fish looks good. So different to the west coast (goan) style of fish that I am used to eating and cooking.
17 May 2010 at 06:07

Scarlett said…
So, fish is apparently very good for women. Omega-3 fatty acids and all. But I don't like fish, still I figured I should start eating it. Can you suggest a fish with fewer bones? I'm petrified of getting a fish bone stuck in my throat!! Do supermarkets sell de-boned fish?
17 May 2010 at 12:48

Kalyan Karmakar said…
@Pree: You must. The posto base is nice and cooling and doesn't interfre with the eelish

@Spice and More: Well I did cook the pomfret in a West Coast style

@Shaswati: I am sure it will turn out well. Do let me know :)

@Scarlett: I was off fish for more than three months as a bone had got stuck in mine :( This was my return.

Rawas and betki fillets would be boneless. Pomfrets and peti pieces of rui would have fewer bones. Departmental stores should have boneless fillets
17 May 2010 at 18:41

Ushnish Ghosh said…
Dear Kalyan
I was out so did not see this one..great will try in a day or 2. I have some state of the art , I mean state of the Ilish in fridge.
But I cant cook Ilish in Micro..as the fat layer expodes even at 180 watt power. But I will put it in Bhap-e
have a nice week
ghosh kaku
18 May 2010 at 21:00

Kalyan Karmakar said…
Thanks Ghosh Kaku. i normally use a steam method. Tried micro for the first time spurred by our friends in the US. Worked well. Perhaps because we fried it first.


You got state of the art eelish. i got blockbuster eelish, E dike Ma said no good eelish in Kolkata.

Sanchita said…
@Kalyan, Last night I tried this recipe but with Herring as I didnt have Ilish in stock. It was great! Thanks :) I made little changes to the recipe by adding 1 tbsp of English mustard paste and omitted the sugar.
1 July 2011 at 15:14