on May 30, 2010
We don't do five stars too often. For obvious reasons. We still have to pay for what we eat. We haven't sold out to commerce. Our writing's our own ... er because no one's offered to buy us. Till then I can dream of signing autographs while all I actually get to sign are credit card charge slips.  I also find five star reviews boring to read as five stars are supposed to be good to begin with. That's what you are paying a king's ransom for after all. The joy for me comes in discovering little places. 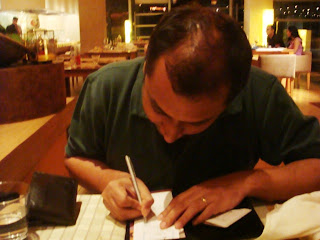 
We had thought that San Qi, pronounced 'Saan Chee' according to our well informed and helpful waiter, was a heavy duty Oriental place. I was a bit apprehensive to see papads on someone's plate when I entered. We were escorted to the first floor where Kainaz threw a fit when she saw gulaoti and biriyani on the menu. 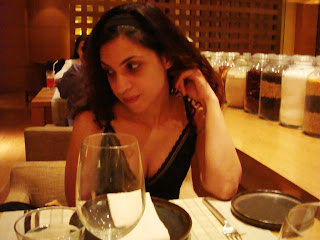 Order was soon restored as we soaked in the atmosphere. There was a sense of space around which gave a sense of privacy. A Zen illusion as there were people in the table beside us and a cooking section with chefs tossing around promises of a great evening next to us. The decor was minimalistic, light shades of wood. The light diffused and yet not dark. You could see what you were eating. And 'shoot' it too (the blogger in me jumped up in joy). Yet it was serene, calm. Romantic despite no candlesticks. 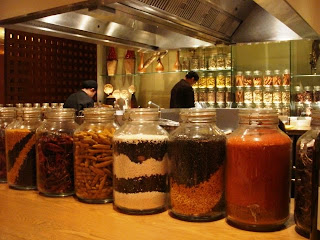 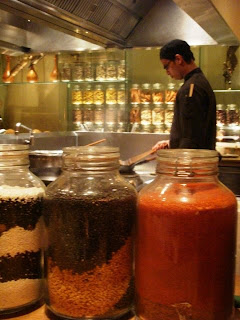 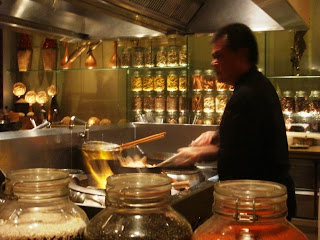 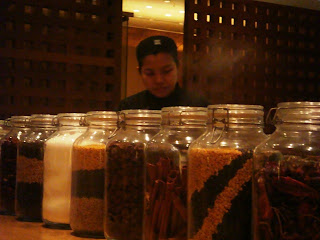 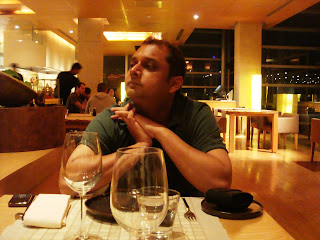 The service was prompt and efficient and yet unhurried. The waiter patiently and efficiently answered our questions which is important with an unfamiliar menu.

I had a Sake based Mojito which was nice and cooling. They had a Sake based Martini too. This Japanese rice wine was available by itself. At Rs 2500 (50 USD)! Like I said, I sign charge slips and not autographs. But if you can afford it then it's there. 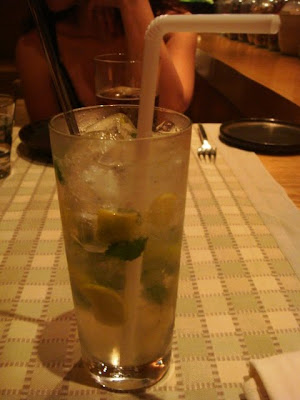 We decided to go with samplers for our meal.

The pork sampler was personally put together in heaven and sent down to us. It was a Chinese sampler. The Honey roasted pork consisted of thin slivers of ethereal pork which flapped playfully in your mouth. Each bite was special and you knew that you were privileged to enjoy it. One of those moments in life where everything stops still and you gaze happily around you. No cares. No worries. For a few moments you are the 'King of the World'. 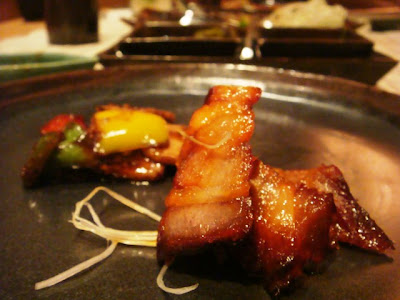 The Honey roasted pork was paired with a very efficient Char Siew. I had had this red preparation of roasted pork earlier in the year at Singapore's Chinatown. Barring the absence of sticky rice, the Char Siew here was authentic. Top quality. With each bite you felt like serenading 'love me tender'. It was a very pliant and malleable cut of heaven. It was so good that I stopped mid meal to update about it on the Finely Chopped Facebook page. 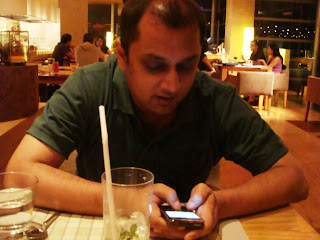 We had this with a Japanese sampler meal. The problem was that they had only one combination here so we couldn't go for more variety between the two of us. There was a Thai and a Chinese sampler too but K said Sayonara to them. She wanted Japanese. Though she was flexible when it came to the pork sampler. And, tauba tauba, there was an Indian (!) sampler too. Guess they sold out to the 'multi cuisine' temptation at Four Seasons.

We started with a Sashimi platter which they substituted the sushi with on our request. And explained the presence of Wasabi sauce. While we didn't need it. I did feel irritated when they didn't do the same at Tetsuma. The folks at San Qi obviously cared. The minuscule bites of Sashimi that I got were very fresh. 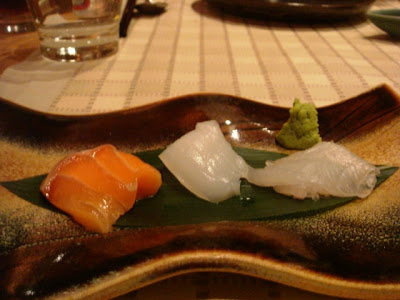 I was bent on trying Chopsticks. Did succeed after a few swear words, cheating with fingers and many a slip betwixt the chopsticks and the lips. 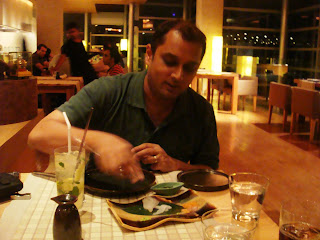 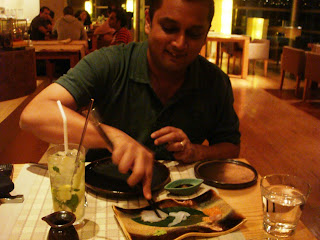 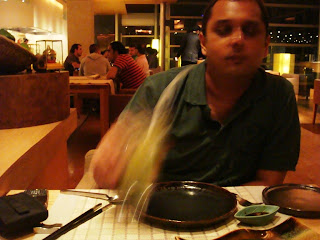 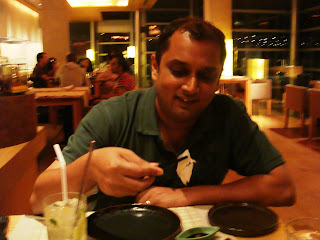 The Tempura platter was pretty good with two large yet delectable prawns and an Okra which had lost its way into our plate. 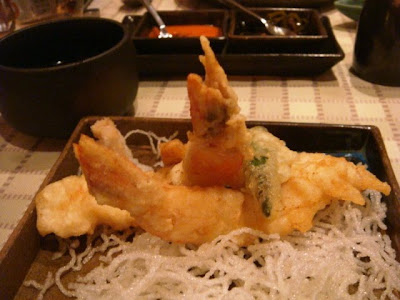 Dutch pork loins followed with sprouts, sticky rice and Miso soup. I did not like Miso soup when I had it in a Singapore breakfast buffet. Still don't. The pork had an elegant, faint flavour to it, mildly salty. It was a good cut of meat but was a bit dry after the melt in your mouth blockbusters in the Pork Platter. 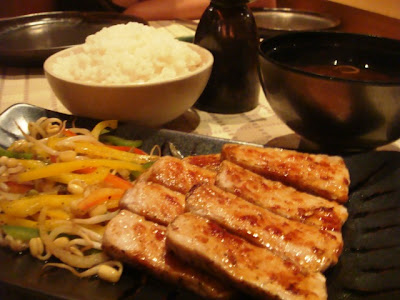 Green tea ice cream followed. K looked away after a bite. I had a bit as I was not entirely full. Taking a Bourdain allegory forward, I felt like a big brown ape, tickled but tantalised by the delicate portions which honestly weren't meant to be shared as I told Kainaz 101 times later. Well, the green tea ice cream tasted off, well ... tea! 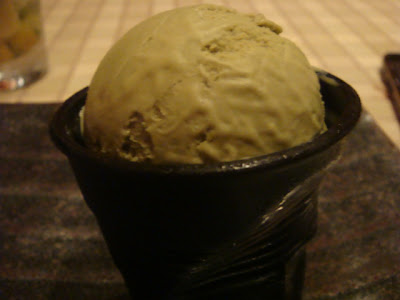 Kainaz took hold of the menu, dropped her Japanese fixation and went for a chocolate fondant. This was chocolate baked in a chocolate cake, a scoop of hazelnut ice cream and a bit of Martian Jelly. Tasted even more heavenly than it sounds. I braved marital discord to get you a few pictures of it. 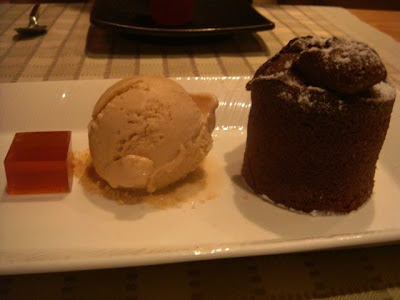 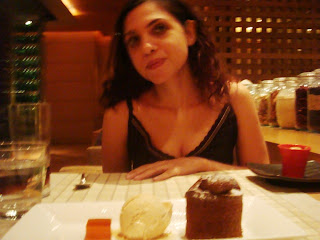 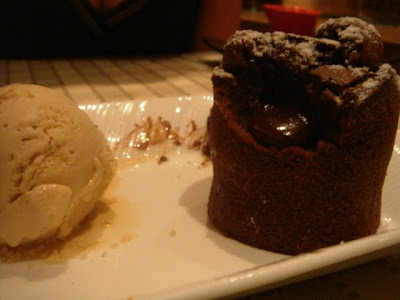 We went to to San Qi to feel special. We did.

If you want to have the same stuff barring the pork. Lot's more of it. At a a cheaper price. Then head to Global Fusion at Bandra..

Update: This is what a reader wrote in after reading this post:

We started off with Spicy Wasabi Prawns & Red Cabbage. it was great, with mellow pungent wasabi. Next came the Black Pomfret Tepanyaki, i didnot like the fish much (not a fish fan), followed by Sansho Pepper Chicken, Yuzu Potato, Cherry Tomatoes (ohh the chicken was brilliantly tender) and Tempura Soba – Buckwheat Noodles Soup, Prawns, Greens.

Your pictures of green tea ice-cream did not appeal me much and I opted for the safest Crème Brûlée.

The experience was good enough."


Thanks Karjori. Glad you had a good time. And thanks for the feedback on the dishes.
Fine dining Mumbai highs Oriental South Mumbai

Scarlett said…
I think Japanese cuisine is an acquired taste. I don't like it one bit but I think it's the most expensive cuisine in the world, isn't it? The only thing I like is Teppanyaki.
31 May 2010 at 12:10

Bombay Foodie said…
I dont feel like splurging (and I dont like Four Seasons for some irrational reason), but this makes me go off to Global Fusion right away. Haven't been there in er.... two weeks.
31 May 2010 at 12:52

Kalyan Karmakar said…
K: and a near escape for the photographer

@Ash: Yes, the Japs managed to command value in whatever they do. The Dutch pork loin was Teppenyaki

How much would dinner for two at San Qi set me back by?

Is Global Fusion still as good (because your review dates back to 2009)?

Can we stay in touch on gmail/gchat?


Have been thinking of visiting for quite sometime now. Thanks to the Restaurant Week that happened a while back, I kept wondering why was it booked to the brim to start with. Had to settle for Indigo as a treat for my parents and the husband. But that left me disappointed and only more curious about San Qi.

It seems, with my curiosity abt the place, I have been coming across increasingly positive reviews of the place. But Global Fusion sounds interesting too!
22 October 2010 at 20:18