on May 22, 2010
Someone told me yesterday that 'social networking is tough'. In my opinion it's 'tough' if you look at it as 'networking'. Then it's a chore. Something to work at. But if you Blog, Facebook, Tweet about what you love, are passionate about, from the heart ...they you mystically connect with some of the most wonderful, good natured, like minded, non agenda driven friends. But then that's not a 'network'. 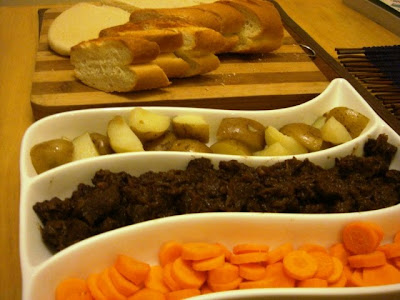 She put up a Facebook status that said that tenderloin was the best meat and that she made the best tenderloin. A playful challenge was thrown and soon Kainaz and I got invited over to her place for dinner.

A sad face (Sad'ey?) appeared on Google Talk. "Kalyan... there is no pork available. The Poona farm stuff will come on Saturday".

"Don't worry. Somewhere out there, there is a pig with my name written on it". Was the next text. And she set off in the blazing sun to the cold storage of Mahim.

Tenderloin was duly ordered. "Tenderloin and rump are the best cuts of beef. I know you guys prefer pork. But I am going to change your opinion".

It was Thursday night. The night before the dinner. A call came while I was waddling on the treadmill.

We were meeting the next night!

D Day. A text appeared in the afternoon. "There is a pig in the oven. Another groaning in pain"

When we finally reached at night and saw the spread, we knew why. Felt humbled. And very loved.

"Intuitive cooking like what you wrote about on your blog. These are all dishes that I thought up off along the way. I didn't make Goan because you guys eat that often"

There was shredded pork in Oriental sauces to start with. The most luscious shredded meat dish that I have ever had.

"I shredded it as I know you guys like pork fat and would have found these pieces a bit dry otherwise".

Well it worked for us. And how. We kept shovelling in mouthful after mouthful in a very porcine manner.

Kibbehs went wrong so there were sautéed cheese sausages. A divine inspired curd based dip which had two sworn meat lovers in its spell. Dipping carrot and cucumber juliennes in a trance into it.

"I need to chop things myself. Don't trust others"... shredding, chopping, slicing, shopping, roasting ....no no wonder that the piggy was groaning. 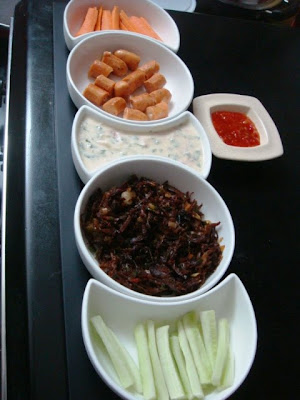 And then the tenderloin arrived. As promised, the most tender, no pun intended, cut of beef that I have ever come across. Cooked in a swarthy, Lawrence of Arabia like marinade of Mid Eastern spices. Beautifully balanced by some very genteel cubed jacket potatoes... kissed with just the right amount of butter and salt .. and carrots. 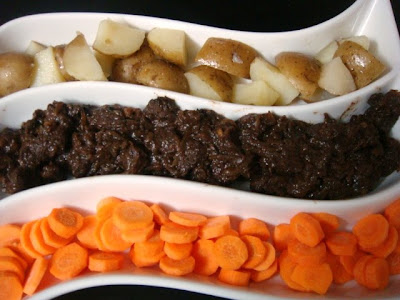 And then the Empress arrived. Juicy, fatty, succulent, seductive, carnal pieces of pork. Made in an Oriental sauce mix. It smelt of the Hawker Centres of Singapore and the street corners of K L. Decadent. Slightly Sweet. Tangy. Flirting with your palate. Charming you. Intoxicating. Did I say sinful? The sort of stuff your mother had asked you to stay away from while you were growing up. And you didn't listen to her. 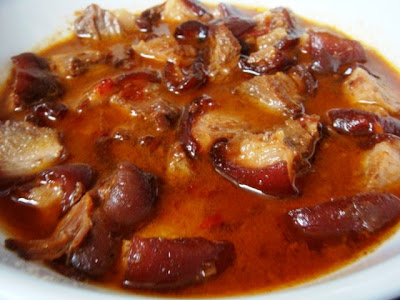 Sorry. Beef is great. Pork is better. And this, as cardiologists will vouch, comes straight from the heart. 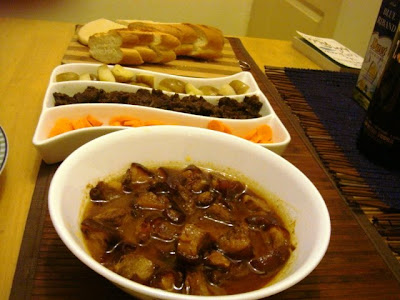 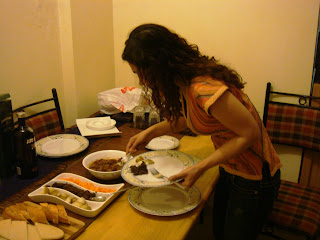 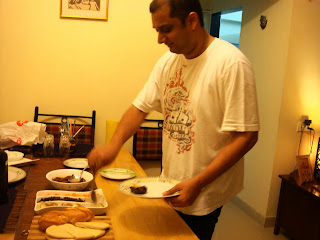 Thought it was over?


Remember the dessert that was ready the previous night? Cointreau infused dark chocolate mousse with wicked chocolate chips nestled at the bottom. A fitting climax to a meal which could only be described as orgasmic.

And if you don't like alcohol in your desserts like K then this Baking Goddess will ensure that there are some without Cointreau for you. 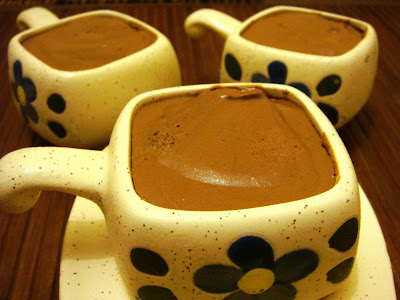 And then she packed it all and more for us so that we could carry back much more than happy memories of an enchanted night.

Thanks G, I don't say this easily as a reserved, genteel, stiff upper lipped Bengali Bhodrolok but 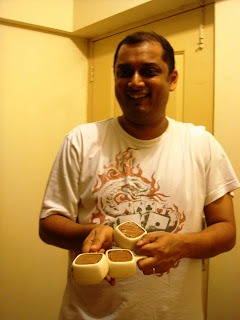 From the hip Oriental People

Kalyan Karmakar said…
@Meeso: thanks, we just had some mre and she had packed it for us :)

Ushnish Ghosh said…
Dear Kalyan
Your writings are a great treat for me, food and recipes are bonus ..
have a nice sunday
ghosh kaku
23 May 2010 at 08:44

@Ghosh Kaku: thanks so much for the encouragement

Samil said…
I agree the photos are really nice

@Sam, Mumbai Paused: Well I rarely come across who has the patience for me to photograph. Let alone encourages me