Better late than never... the rediscovery of Cafe Mondegar

I left Calcutta, the city of the East Bengal Mohun Bagan football rivalry and came to Mumbai in 1997. I discovered another rivalry once I come here. Not football. But between the fans of the two pubs at Colaba. Mondy's (Cafe Mondegar) and Leo's (Leopold).

The main difference between the two as I saw it was that Mondy's was where those who had grown up in Mumbai hung out. Leo's, on the other hamd, attracted out of towners and a sprinkling of foreigners. The proportion of foreigners at Leo's has gone up since then. The book Shantaram, set largely in Leo's, played a big part in this. I don't frequent either much now. But Shriya, a Mondy's loyalist says that this difference holds true now too. I was also under the impression that Mondy's only served beer while Leo's had a wider bar. Not sure about that now.

For some reason I was always more of a Leo's fan. I doubt if I have gone to Mondy's on more than five occasions over the last ten years. 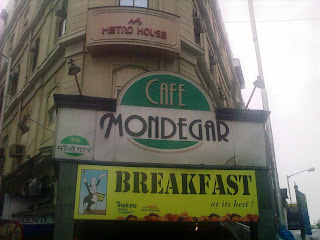 I happened to go there after a century recently. At the insistence of Mondy's fan, friend, colleague and food lover, Shriya. And was pleasantly surprised. The food was really good.

I looked at the Chinese section on the menu. But Shriya said that she could vouch for the continental fare. Not for the Chinese. I know well enough to put myself in the hands of a loyalist when I go to a place. So I went with her suggestions.

I ordered a plate of roast beef. I didn't know what to expect. I prefer pork over beef and have rarely been pleased by beef. I was anxious. I was tentative. I was fraught with doubt.... and I was pleasantly surprised. The slices of beef were extremely tender. One of the best cuts of beef that I have ever had in my life. It came in a 'demi-glaze' sauce which  complemented the meat wonderfully. The roast was covered with a layer of crusty rosemary. This gave it an interesting bite and texture without the rather strong flavour one normally associates with Rosemary.   I finished everything on my plate well after I was full That's how good it was. 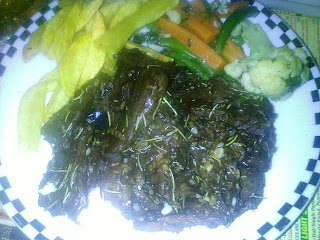 Shriya ordered an 'All American Mixed Grill' steak, if I remember the name right. Fried egg. Sausage. Bacon. Steak. Chicken. Looked very sumptuous. It made Shriya's approval. I had a bite of sausage. Tasted pretty good and juicy. 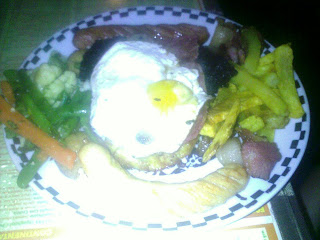 I normally skip chicken dishes in Continental places in Mumbai. They tend to be chewy. Ipsita, fellow Finely Chopper from work, ordered something called Pollo Arrosta or something. I took a bite of the chicken to taste and then a few more. It was a fried steak. The initial taste was very juicy and tender and saucy. Followed by a rather robust and pleasant stuffing as you explored it futher. I am definitely ordering this the next time. 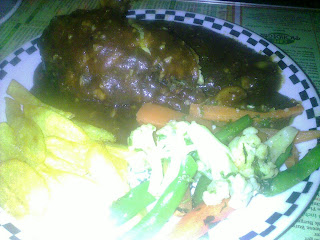 And yes, there will be a next time. Good recommendation Shriya :)

The service was friendly though a tad slow. The promised 'ten minutes' turned out to be closer to half an hour. But it was a lazy afternoon. A lazy place There was a gentleman in his fifties sitting in the table beside us. He had four empty pint bottles of beer in front of him. He was sending song requests to the famous Jukebox of Mondy's. He tapped and swayed to the beat of songs from the seventies and eighties. Lost in his own world. Clapping. Throwing his arms in joy when he liked a note. Smiling. Very happy when I complimented him on his choice of songs when I later left. We shook hands. Two happy men in the middle of Colaba. One high on beer and music. Another on great food and great company and the discovery of a wonderful, anything but 'new', place. 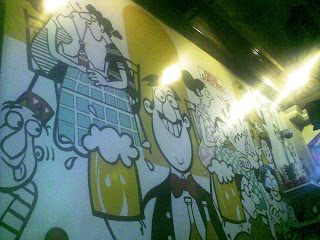 Scarlett said…
I prefer Mondy's over Leo though I haven't grown up in Mumbai either! I've been to Leo's many times too, but Monday's has better continental fare (Leo has better Chinese), better service than Leo's (whose waiters are perpetually stoned & uber rude), and Mondy's breakfast is to die for! You just have to go there for breakfast sometime! The catch? They serve breakfast till 11 or 11.30 only. Maybe you can go on a weekday!

Saloni Chavda said…
Though I love Leo's, Mondegar is my favorite because it has a very lively atmosphere, cosy and the food is really scrumptious! & I love the cartoony artwork by Mario Miranda!
12 June 2010 at 15:36

Kalyan Karmakar said…
Hey Saloni, Simran, Scarlett.... I must say that meal at Mondy's was leagues ahead of what I have had Leos in my recent visits. I believe that Leos is more Gora obsessed that it used to be. Luckily I have not faced that yet
13 June 2010 at 02:27

Shaonli said…
very nicely described Kalyan! Mondy's was one of my favs in Mumbai ... and your blog has ignited that spirit to revisit the place soon!
5 August 2011 at 19:00