on June 02, 2010
Today was a historic day for Bengal and Bengalis. The day when Mamata Banerjee, or Didi as she is known, won the Municipal Elections in Kolkata. This was the first defeat for the CPI (M) or the Reds in more than twenty years. For those of us who lived in Calcutta in the 80s and 90s, and left because 'life was stuck in second gear', this seemed as impossible as the fall of the Berlin Wall. 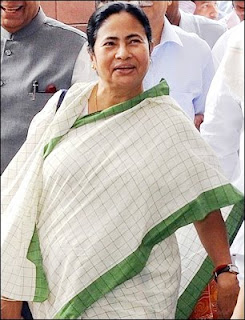 This was also a day when I finally had my first phuchka in Mumbai after more than a decade here. A "Biktori oph the peepool, phor the peepul and bai the peepul" as Didi said.


It all started when Irin put up the news about Hangla, the harbingers of rolls and biriyanis in Mumbai, serving rolls. I wasn't too sure if the Bandra outlet served rolls. Irin called and found out that they did. I was given the job of finding out the truth. Couldn't say no to Irin so I set off with a search party. A fellow Bengali who too has spent time in Calcutta and a Kashmiri Mumbaikar.

We went to Hangla at Bandra. Were told that the phuchka shop was 'Shopper's Stopp'er shaamne' (in front of Shoppers). Couldn't find it. Came back. Mohan, in the red shirt took us. There it was. Right in front of Bandra Shoppers Stop, beside the bus stop and the cigarette shop. Diagonally opposite the Hangla Roll Shop. 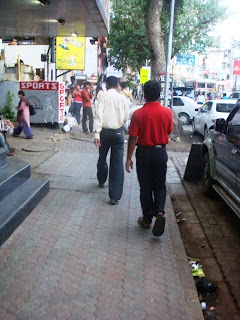 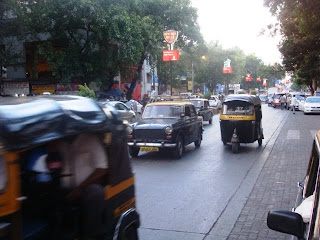 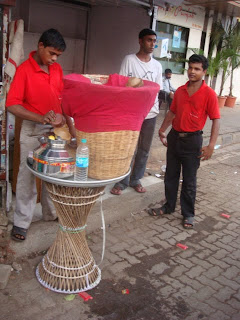 The Mumbaikar in our group asked for mitha (sweet) water and was sternly told that 'Phuchkas don't have sweet water'. Nor do they have moong sprouts, boondi, onions and tomatoes. They are not Paani Puris. They are not gol gappas. 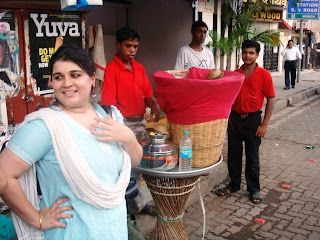 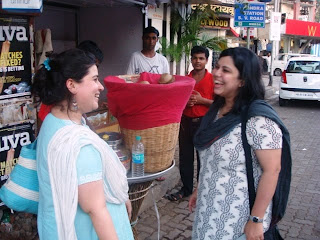 There was lust in our eyes as we saw the phuchkas getting made. The first bite was sheer joy. An emotional moments for us two Calcuttans.

For me it was a flashback moment with images of my maid buying my first phuchkas on Dhakuria Bridge, 12 for Rs 1, when I was eight. Having phuchka outside the Presidency Gate after years with the girls in my class. Throwing my mom's reservations away. Hogging on the Lindsay Street Phuchkas during my first trips back to Calcutta with one of my best friends from College who'd returned from the UK. Introducing the newly wed Kainaz to phuchkas at Lindsay Street. Seeing her fall in love with it. Years later two of us popping phuchkas before Dolly's at Dakshinapan. And my mother leaving her phuchka and girlfriend reservations behind sneaking phuchkas with her son and daughter in law.

Then the tasting begun as the sepia settled. 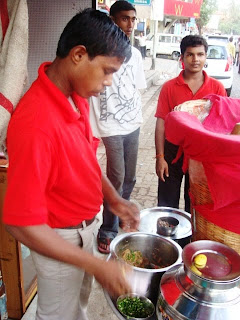 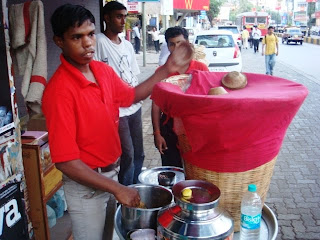 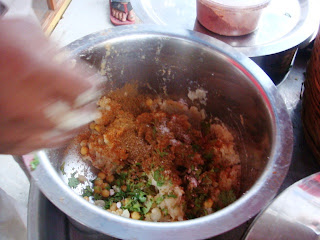 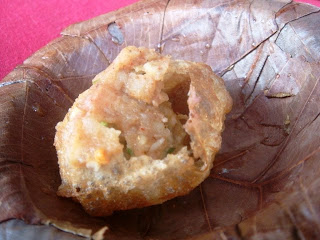 Our verdict: there but not quite there yet. Needed a bit more salt. The tamarind water needed to be a bit more sour. The phuchka shell needs some work on. The oil tasted a bit awry. Probably lacked the honest sweat and snot (sic) of the Bihari and UPite phuchkawallahs of Calcutta. But all said and done, the phuchkas at Hangla brought alive fond memories and showed promise.

As Didi enigmatically said on TV "workaars can be leedaars too". 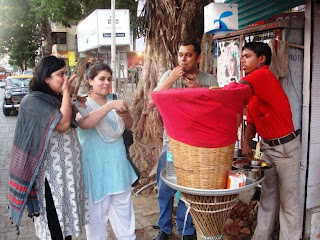 This is what Arnab had to say on the Finely Chopped Facebook page after sampling phuchkas at Lokhandwala Hanglas this evening.

We followed the phuchkas up with 'choor moor', the dry mix of crushed phuchka shells, masala, potato and tamarind water. Generations of pony tailed school girls in Calcutta have grown up on this. 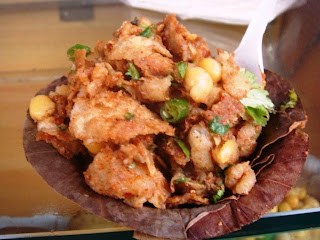 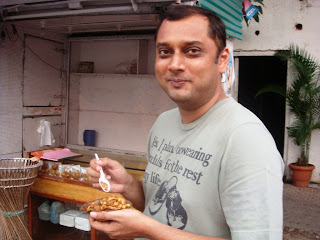 And then the police van came and did what the police do world over. They took the phuchka cart away. Something I had seen happen at Istanbul too to the earnest young man who was sending film posters on the streets of Istiklal Cadesi. Anyway the guys at Hangla reassured me that they would get their cart back. 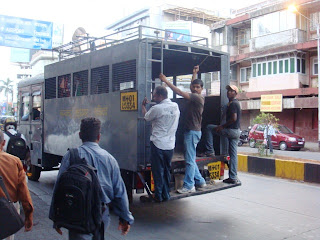 So off we went to CBTL to celebrate the discovery of the Penultimate Phuchka with Ulitmate Mocha. 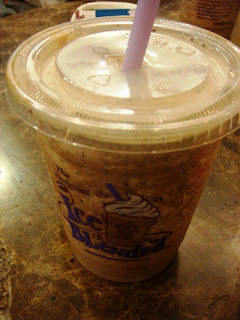 Note: This is not a blog about politics. The observations on Mamata Banerjee were light hearted so please don't become too Bengali and get into a debate about her and her politics. Instead let's celebrate the entry of phuchkas into Mumbai.

For the factually inclined, a plate of phuchkas with 6 phuchkas is Rs 20  (0.5) USD. Ditto for choor moor. The stall opens post 5 PM

To see the interest aroused by phuchkas amongst Bongs, look at the responses on Irin's page. 43 and counting!!!

Miri said…
:) That was nostalgia at its best - sigh...I'm waiting for the day when Delhi gets an honest to goodness Mumbai bhelpuriwala!
3 June 2010 at 10:20

Pinku said…
hi,
congrats on the entry of Didi and phuchka :)

this is one thing we already have here in delhi in the form of phuchka sellers in CR park. so I can smile indulgently without being envious.

Scarlett said…
Guess who couldn't resist putting up a picture of his gym-going swelte self ;)

Congrats, you have lost weight! Now please tell me how to lose some as well.

Kalyan Karmakar said…
@Somoo...I am sure that the phuchkas will reach the land of supersized bliss someday

@Sasha: done. I should have asked Mom to get some when she come from Cal. I had once got it for K when I went there on work. You get the phuchka shells and the moshla which is to die for

@Miri: Someday hopefully given that all chaat wallahs come from the cow belt. Some joys can't be substituted

@Pinku, Blr and Dilli are more Bong friendly than Mumbai. In Cal I think it is still 1 for 1 Re

Loose weight? I just go. Stand on the treadmill. Watch TV. Come home. Barring the odd bacck ache I could win an attendance prize at the gym

sharmila said…
came to ur blog from IndiBlogger ... most beganils - where ever they may live - they miss to things(n that's good )1. their food esp. fast food 2. their "adda" ... well for me i love my gol gappa with mittha jeyada :)

Kalyan Karmakar said…
@Sharmila...at Sharmila...thanks for dropping by. I have rediscovered add through the Blog

Kalyan Karmakar said…
@Sharmila...at Sharmila...thanks for dropping by. I have rediscovered add through the Blog

Sharmila said…
Jah baba .. ekta bishal comment likhlam ... udhau!
I missed this post .. but have got a Bihari phuchkawala who has the perfect tetul jol .. not with mint that is so common here ... but does not give churmur ... hoping fervently he doesn't improvise to suit local taste. :-)
14 June 2010 at 18:47