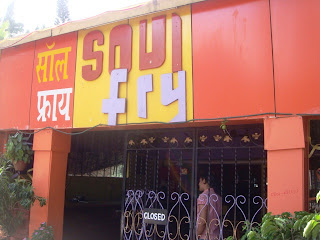 Surprisingly I had never been to Soul Fry at Pali Market before this despite living next door for close to seven years now. I had heard mixed reviews about it. I am not much of a fish person. K is not into Goan or Malwani fish preparations. Soul Fry never came under our radar.Till M, a Soul Fry loyalist, suggested that we meet for there lunch. So off we went. A Bengali who is ambivalent about fish but loves crustaceans which are not good for him. A Parsi who looooves fish. A Malayali from Bangalore, settled in Mumbai, had experiments with vegetarianism and is now back to fish with a vengeance. A Maharashtrian who is till experimenting with vegetarianism though his mother makes the most fantastic crabs and prawns at home. That's Mumbai for you.
The place had a nice, cosy buzz to it. Each table had languid groups around them ...  more off riends and couples rather than families. Barring one squealing baby. The mood was languid. The conversations chilled. As was the beer and the service. I took an instant liking to the place. It was lazy. Just the way God meant Sundays to be. 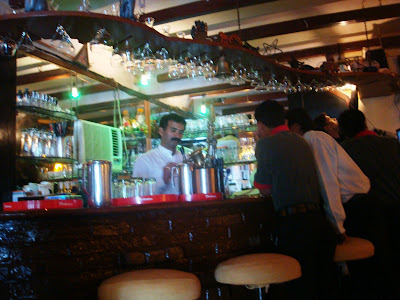 I wanted a few starters to go with our drinks though M insisted that the main courses are stellar here...especially the Teesrya (clams) masala. We started with crumb fried prawns. One bite and I went 'uh oh'. I finally reached the prawns after a deep journey through the batter. The prawns were rubbery and chewy. Memories of my recent visit to Soul Fry Casa, their branch at Fountain, begun to haunt me. And the horrible prawn ambotik that I had eaten there.
I muttered something hesitantly. M responded by saying, 'well you have not ordered what the place is famous for. Clam masala. prawn curry'
Couldn't argue with that.
I took photos which reminded me of something that I learnt at Pangat, the Malvani seafood joint at Borivl. West Coast seafood plus poor lighting spell disaster. So prepare yourself for some gruesome food pics. Some of these don't do justice to the food. 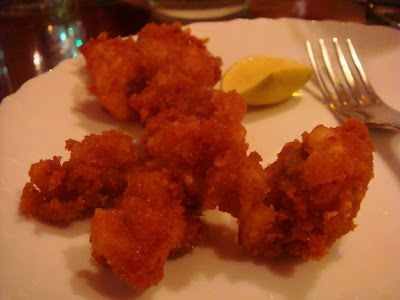 I called for some Bombil or Bombay Duck fry. Something which Kainaz and I both love. Our standard orders at all Malvani joints. Even M likes it apparently.

Well Soul Fry is a Goan and not a Malvani joint. The Bombay Duck at Soul Fry? Well the batter was nice and crisp. 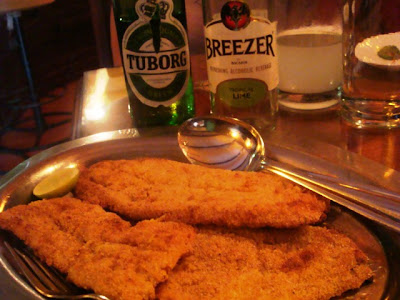 I had reconciled myself for enjoying the mood, the conversations, the beer, the ambience ... this is one of those 'cult' places I decided. Not about 'food' I concluded. Rather hastily as I discovered.

For then the plot begun to change. The story turned with the 'main courses' as M promised.

Kainaz ordered a Sukha (dry) Chicken. Our favourite order in Seafood (!) joints from the West Coast. One bite and my entire demeanour changed. Scepticism vanished. This was very, very good food. The chicken was succulent. All boneless leg pieces. Luscious. It was cooked in a soft, eiderdown bed of grated coconut in a masala which was rich and yet not too spicy. The full blown Indian experience without making you sweat for it. It was a dish that was hearty, cheerful, joyous and encouraging. I finally woke up. I smelt good food. I smelt great food. 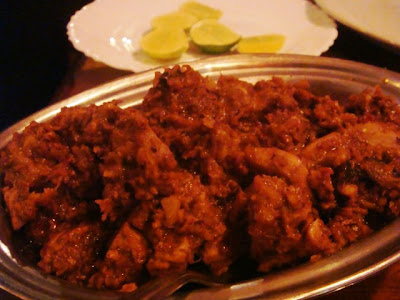 Next came my order of Prawns in Goan Rechad Masala. Gone were the geriatric, tough, bitter with life, prawns that were crumb fried and given to us earlier. These babies were juicy. This was hot in all senses of the word. Tears of joy rolled down with each bite as I looked to the last drops of beer for succour. This was a dish which set the afternoon on fire. Luckily we just had to stroll down an alley to back get home. It was hot outside. But, this was not all. Climax was yet to happen. 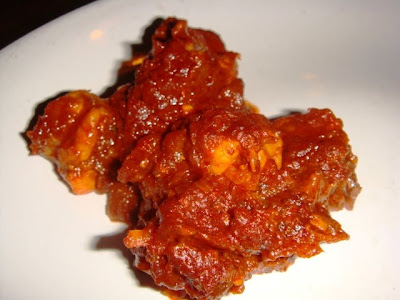 The clouds parted, the sun shone, the birds began to chirp, the Spice Girls began to sing with the first bite of the clams, or Teesra as they call it here, masala. It was everything that M had promised. And more. She had been talking about it right since we entered. Now I knew why. Now I knew why she left her experiments with vegetarianism and come back to sea food. The call of the clams had won this Bangalorean over.

The 'masala' had a slight sweet undertone which was a pleasant change from the tempestuous Rechad Prawns. It was zesty without being overpowering. And what wonderful quality of clams. Each had a nice resounding addictive scrunchy bite to it. A fitting finale to a meal which begun indifferently and ended in a crescendo. A celebration of great cooking, heady spices, fresh seafood, hospitable service and a pleasant cocoon-like ambience which dulled your senses and made you feel at peace with life, one with nature. 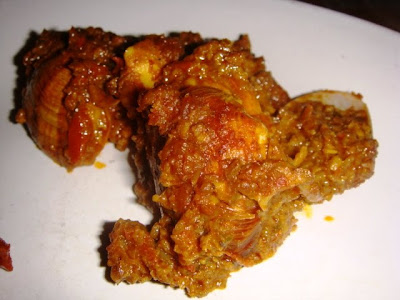 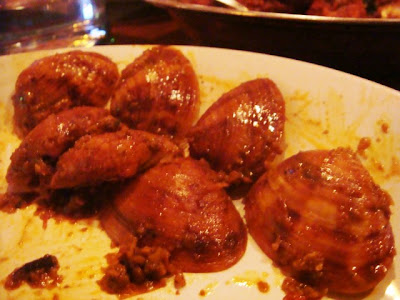 There was a lesson hidden somewhere. If you go some place  based on the recommendation of someone who absolutely loves it then be patient and don't judge quickly. And follow her suggestions on what to eat. You are rarely going to go wrong where there is passion, reverence and devotion involved. If you know a person to be a food lover then trust the person.

We did. And we were happy. 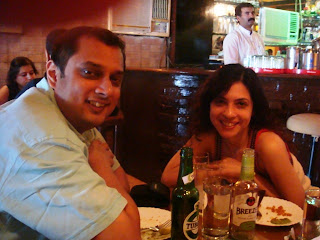 As was M. She said that she felt like a 'proud parent' to see us enjoy our meal so much. I knew what she exactly what meant. I could feel the pride.

btw, she tells us that the Monday Night Karaoke is quite the thing at Soul Fry apparently. 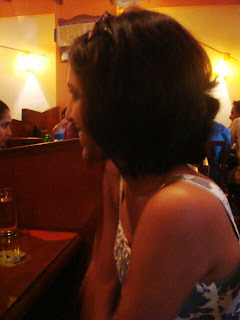 Note: We did have a vegetarian with us who truly enjoyed the chilly mushroom which M remembered from her vegetarian days. I had a few bites. It was good. And for the records, that Breezer wasn't his, so can he take his face out now? 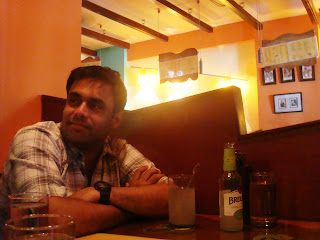 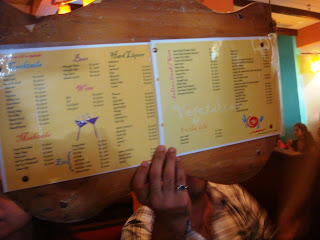 Dew said…
Hey Kalyan, I made some achari chicken last night. posted on my blog too :)

Kalyan Karmakar said…
@Scarlett: Oops, should have been 'fish'. Should have had my morning cuppa first. Thanks for pointing it out. You have earned your stash of Brownie Cheesecake
1 June 2010 at 11:55

Will check it. Am always on the lookout for chicken recipes. Achari sounds great. This is what I did once http://finelychopped-k.blogspot.com/2009/08/murg-mango-dolly-saucy-and-easy-chicken.html

@Happy Fork...guess I need to go with a loyalist. I saw the Highway on My Plate guy drool over Gajalee. But the stuff he loved was very expensive
1 June 2010 at 18:47

Parag said…
hi i really love ur blog it has enhanced my knowlege abt good eateries in mumbai. Being a student i generally spend less money on restaurant meals. have somethng of in that price range for u. Its very nice nd simple non veg placein Parel named Trupti Upahar gruha. A family run place tat reminds of good meals i had in malvan. Its in 2nd lane once u get down frm Parel flyover towards town side.I bet since u nd ur better half are fans of Bombil fry wil love wat this palce serves nd i bet u will hv most delicious nd economical fish meal in mumbai.I hope u will find time for this tiny place in ur busy schedule nd give us ur thoughts.
1 June 2010 at 19:27

Desisoccermom said…
You sir are a true foodie! Tears of joy rolling down on tasting the Rechad.
I have fond memories of Soul Fry. As a new bride I took my husband there to eat and he loved every bit of it. Thank you for refreshing the memory. :)
1 June 2010 at 22:29

Indli said…
Your blog is cool. To gain more visitors to your blog submit your posts at indli.com
1 June 2010 at 23:40

edenist said…
The bombay duck at Soul fry goes well with beer... tried the Gajalee version and it was lighter but oily.
11 June 2010 at 11:24