I was going through all the comments that you have written after my last post. All the mails that you have written. I have not answered each individually. I was overwhelmed. I had no idea what the blog had become. I was humbled. A big smile flashed across my face as I read each comment. Then I realised that the best answer to each of you would be to write a new post. So here you are, The World's Easiest Mushroom Dish. 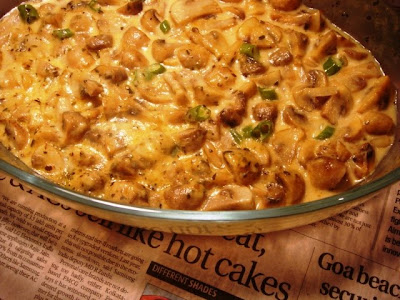 Consider the circumstances in which I made this. I was at the gym for a good hour....ambling, then pedalling. In between caught the end of the Japan Paraguay FIFA WC match. I started cheering for Japan as I walked on the treadmill. My trainer joined me too. And then Japan had a wind deflating loss. I walked back home at 11.30 PM. A long day. Bone tired. If our lives had a soundtrack then I was physically tired enough for Bruce Springsteen's Streets of Philadelphia would be playing. Point I am trying to make is, not the ideal prep for cooking a gourmet dish. Reached home. Banu, my Sous Chef cum woman Friday, had made bhindi and roti for dinner. Not soul uplifting stuff. That's when I looked into the fridge and the rest was history.
Banu had sliced a packet of button mushrooms which she found in the fridge and kept it.
I went for a shower. Got the amazing fragrance of cheese and oregano wafting through the house once I stepped out. Took the dish out of the micro.
And let me tell you that it tasted even better than it looks. The creamy blend of melted cheese, teased with a hint of oregano with the bounciness of mushroom and the sharp tongue of the green chillies made it an amazingly sensuous dish. I did use cheese. But given that it was slim cheese plus mushrooms plus very little oil and steamed, embarrassingly healthy too. 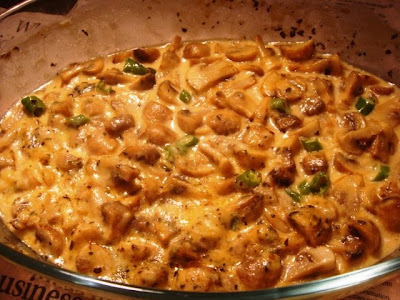 Note: My mom's left. She called today. She said that she thought I looked slimmer this time but didn't want to say it so that I wouldn't begin over eating :) Comp is back in the study. Fewer typos. And a wifi connection which keeps breaking.
Thanks once again everyone.
Conti Lazy cooking Lonely Hearts cooking Recipes Salads

Journomuse said…
I am definitely going to try this. Drooled all over the photograph, and guess what I'll team it with. Some yummm garlic baguettes that are available frozen here - 3 for a pound with garlic butter in it, I'll pop one into the oven while this dish cooks in the microwave..:)
30 June 2010 at 23:44

Unknown said…
Wicked cool. You are a cat.

I do such things too, especially if I am the one to eat. One time, cracked eggs on a bed of spinach, sprinkled Parmesan, cracked black pepper and set it on 350 to write a Blog post. That was my brunch that day.

Kalyan Karmakar said…
@Journomouse...we get baguettes at around Rs 30 at a place called Candies next door to where I live. Sounds like an excellent pairing

@Regina... hope it works for you

@Pree: I think I took to micr cooking with renewed vigour after reading your blog starting with the pulao recipe. Er, ate it as a side with the roti and bhindi
1 July 2010 at 14:04

Sharmila said…
Wow! Am not too much of a cheese fan or into making the tricky white sauce ... this dish sounds so easy and wonderful.
With roti and bhindi? :-(
I think throwing in some left over rice would make a perfect one pot meal. :-)
1 July 2010 at 14:08

Farriemist said…
I tried this last night and it turned out to be great! I just added chopped green pepper instead of chillies and the oregano really left a pleasing taste in my mouth!
6 July 2010 at 15:01

Kalyan Karmakar said…
@Sharmila...and then you would have had risotto :) btw had daroon bhindi steamed in shrimp paste the night I left

@Farrie...that's great to know. i am a great fan of green pepper. Did you add it right from the beginning or towards the end? I prefer mine slightly raw
12 July 2010 at 13:31