on June 09, 2010
Hyperboles abound in India. It didn't take long for people to dub Lower Parel as Mumbai's 'Madison Avenue' when a few ad agencies moved in. In reality Lower Parel is a mix of a few isolated mills converted into office complexes and one shopping complex, Phoenix Mills. These modern complexes are connected with each other through dirty, dusty, sunny, congested roads and old tenements and shanties. Two different planets coexisting beside each other. Reflecting the many faces of Mumbai.

I currently work at Chinchpokli. Deeper into the old Mill Lands of Central Mumbai than Lower Parel. Fewer swank complexes and no malls or coffee shops here. This is the place of frenetic flyover and metro construction and still born traffic.

There are few eating options around. We normally head to South Mumbai or Lower Parel if we want to go out to eat. Even if it means breaking through the sort of traffic which can crush the most optimistic of hearts, the hungriest of tummies.

The best option to eat at Lower Parel is Phoenix Mills. This is a shopping complex consisting of a a number of malls in a sunny courtyard. It has quite a few eating places. Quantity more than quality is the norm according to me. None of the food is really stand out though. 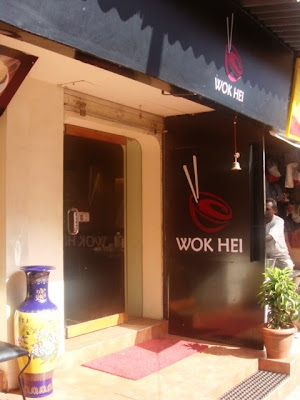 There is a relatively new Chinese restaurant called Wok Hei which has opened outside the Phoenix Mills complex on the main road. Someone at a party recently told me that the food is good and that the place is not too crowded. So we thought of checking it out the other day. I set off with Ipsita, a fellow food lover from work. I called to find out about their lunch hours. "Up to 4 PM", I was told. "Should I book", I asked.  "We are empty sir", the voice on the other side said.

Well Wok Hei was quite crowded when we went. Two office groups had come in after us. It was a simple place. Spartan furniture. Almost Udipi restaurant like. The glasses seemed a bit dirty and we opted for Cola bottles with straws.

An ever smiling gentleman came to take our order. Unfazed by the sudden crowd. And the angst of the friend of a vegetarian who had been served chicken. He gave them a free dessert. Apologised. Ignored the heckles of the others in the group who wanted free desserts too. Came back to us. Answered our questions on the menu to our satisfaction. Got our food fast. Taking pity on our state of hunger. The indefatigable Mr Ram, from Darjeeling, definitely added to the charm of Wok Hei for us. 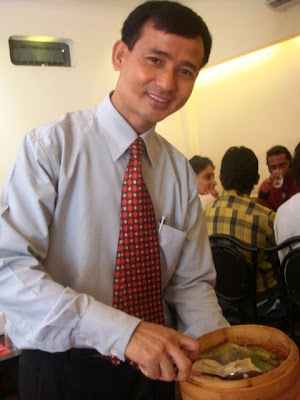 We started off with a plate of chicken momos. A layer of oil oozed out when they put the put the momos on our plates. Ipsita later conjectured that it could have been pork momos and hence the oil. I didn't agree with the conspiracy theory. I think the oil must have been to put to ensure that the momos didn't stick to thesteming basket.

She hhas got used to the drill of eating out with me. Waited patiently while I shot what we would eat. 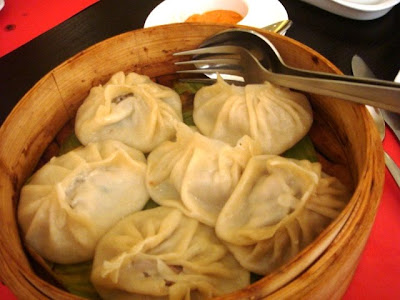 Well enough of technicalities. The momos tasted really good. The momo shell was as soft as a chubby Gorkha baby's cheeks. The chicken mince filling well flavoured. The dips tantalising. Bringing back memories of momos at Darjeeing and in the Tibetan shops of Elgin Road in Calcutta for both of us. There were two beaming faces at Wok Hei that afternoon. 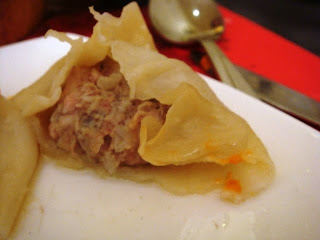 We called for a starter called Chinqong Prawn if I recollect right. Or was it Qongching prawn? We had this as a side dish as we prefer to have dry side dishes and not ones with a lot of sauce.

The prawns were good. Not stale. Not as juicy as the ones at Mainland China. Good middle of the road stuff. What bowled us over was the base of crackled red chillies, garlic, pepper corn and salt. The condiments brought alive the sleepy prawns. It reminded me of the Sichuan peppercorn based dishes that Kylie Kwong makes on TV. Very different from the Red Ninja stuff which masquerades as 'Schezwan' in local Chinese restaurants here. This was a dish with finesse and elegance. Delicate and yet sharp. 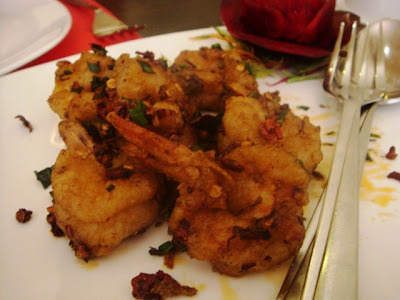 We skipped the exotic bamboo rice. Which was actually served in bamboos! 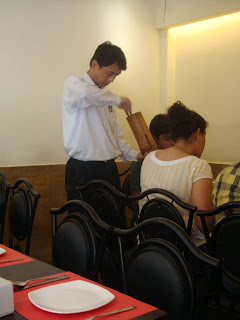 We went for the burnt garlic chicken fried rice instead. As Ram explained, this was regular fried rice made in garlic infused oil. It turned out to be quite a pleasant mouthful. The rice was firm and separate. Not authentic but that's how I like my rice. Sticky doesn't work for me. The fried rice was well flavoured, insidiously light and was gobbled up with pleasure by the two of us. 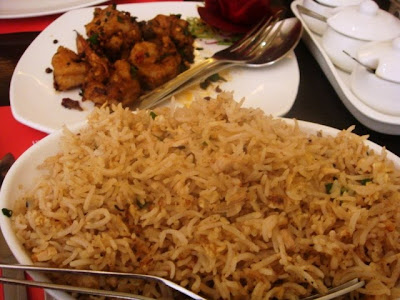 Good food. Pleasant and competent service. Reasonable prices. Tables easy to get. Must go there again while I am still at this part of town.

If nothing else then for that excellent soy with herb dip that they have on the tables. 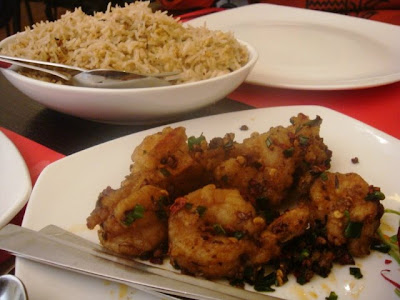 The Bride said…
Must have been Chongqing. Chongqing used to be part of Sichuan province, where the cuisine is known for those fiery peppercorns. I guess these weren't those peppercorns... you should get your hands on some, a very interesting taste!
9 June 2010 at 15:09

ab$hake said…
Is this more of a chinese place or has some tibetan dishes to the menu too? I am craving for some chinese food and I think a visit to Mainland China this weekend is a must :)
9 June 2010 at 17:36

Kalyan Karmakar said…
The Bride...thanks for clearing the air :) Yes, the dish seemed cooked in Kwong's sichuan style but not the right pepper corns obviously. I hope I get to go to China someday to eat

bongdevil said…
I went there for lunch today and my experience was quite the antithesis of yours. When I asked Mr Ram about the Mai tai soup which I assumed would be an interesting warm take on the cocktail, he almost condescendingly informed me that all Thai soups have a coconut base. Wrong on the first count and we should have gone by my gut instincts and politely left to eat elsewhere. But we went ahead and ordered the soup and it turned out to be a starchy broth of 'dhaniya' and lime with a few odd bits of chicken bits. Awful. Next came the crispy american corn with plum sauce, overwhelmingly sweet and clumpy. We managed to make it palatable by accompanying each mouthful of the corn with a teaspoon of schezwan sauce and herbs in oil. We knew from here on that the meal wasn't going to go down well. We moved to the promised 'less oily' taiwan flat noodles and beer chilly chicken. My 'food buddy' who I was meeting for lunch had to almost retrain me to keep me from asking the waiter to drain the noodles on a basket of tissues first. The beer chicken didn't help the restaurants cause either, pretty forgettable and tasteless. And finally the overly gingery and expectedly clumpy date balls that came swimming in melted icecream and a streak of an identifiable blood red sauce, gave the meal a fitting closure. We should have spent the 650 bucks on a charity that was at least worthy of it.
10 June 2010 at 18:32

Kalyan Karmakar said…
@Bongdevil, so glad you wrote in with this. In fact Ipsita apparently went back and had a bad noodle experience. Seems risky. Will probably move the Mumbai High tag at least
10 June 2010 at 18:36