on June 27, 2010
The family legend goes that my dad learnt how to cook Chinese from one of his Chinese patients in the UK in the seventies. That my mother learnt from my father and was one of the first mothers in Calcutta to make Chinese in the eighties. Twenty years later I began cooking Chinese based on memories of what I remembered seeing her do back home. Tonight I made my trademark (chicken sausage) hakka noodles. It was the last night of her visit to Mumbai. She asked for seconds.

Thought that I must write a light post after my whining last night. Thanks to all of  you who wrote in after that. Lapped in all the sympathy. Almost as effective as Monica's cookies and box of tissues (I must have watched each episode of FRIENDS for a minimum of five times).

Remember those times when you go to a restaurant and gnash your teeth because of bad service? Promising never to return?


Well consider yourself lucky that you didn't go to an 'Irani' Cafe in Mumbai. Irani Cafes were run by 'Iranis', Zoroastrians originally from Iran. Not all 'Iranis' are Zoroastrians. Some are Muslims too. However the Cafe owners were Zoroastrians.

The Irani Cafes dotted the landscape of South Mumbai in the last century. They were famous for their inexpensive food, distinctive Irani chai or tea, brun maska (crusty bread with butter) and kheema pao (mince curry with bread). Round wooden tables with chequered tablecloths and quaint Goldilocks wooden chairs were core to these restaurants. As were eccentric owners with a set of rules which included some the following: 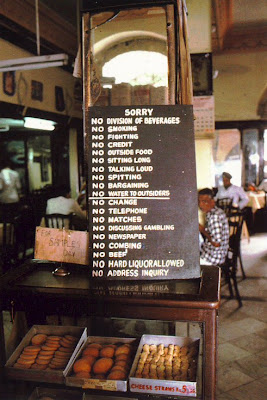 Photo credit: This picture is from an Irani Cafe in  Hyderabad I think. Saw the photo in a number of sites. Here's one. Hope it's the original http://www.oddee.com/item_96471.aspx

Almost like living with your parents huh? There are still a few Irani Cafes left in Mumbai. But their numbers are diminishing.

Well Kainaz's mama was at our place today. He started telling us about an incident which happened in an Irani Cafe he had visited. It was quite funny and I made him write it down as the original dialogues were in Parsi Gujarati. You will get the beauty of it if you understand Gujarati and the essence of it if you understand Hindi. I will try to bring this story to you in English. I hope that it doesn't get lost in translation. And I hope that I deciphered his scrawl properly. 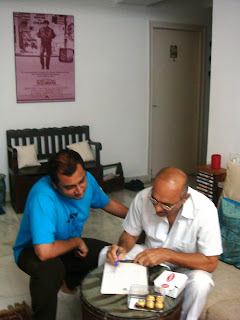 This happened sometime in the seventies or eighties. In an Irani Cafe in South Mumbai's Fort District. We don't know the name of the Cafe. But it was a place which employees of The Central Bank of India used to frequent.

It was early evening. A break after a slow and sultry afternoon at work. A few moments snatched with friends over a cuppa chai before heading home. All the tables under the slowly whirring ceiling fans were occupied. There was a muted hush of conversation enveloping the place.

Suddenly a jovial shout broke the still comfort of the Cafe.

Behram, the owner of the Cafe, continued looking at the cash box, counting coins.


"Behram, samjhaich ke? Chai me khandaaj nathi" (Behram, did you hear me? There is no sugar in the tea. )

Behram looked out towards the entrance. Oblivious to the strange phrase, 'customer service'.

The customer got up and walked to the till.


"Behram, chai ma khandaj nahin" (By now even you know what this means)

Behram looks up at the big bulbous Parsi nose pointed at his face.

(Did I call you? Did I say, come to my shop and drink tea? You are the one who climbed the steps and came. Today there are no complaints. Everyone's quietly drunk their tea and gone. No one said anything. What are these tantrums that you come up with .... God knows how your wife stays with you. Is she still with you or has she eloped and run away)

Guess we can count our blessings the next time our waiter is slow. Or doesn't smile at us.

We have Freddy Kerawalla to thank for this story from more than thirty years back. A man who discovered Ferrero Rocher for the first time in his life today. And is smitten. 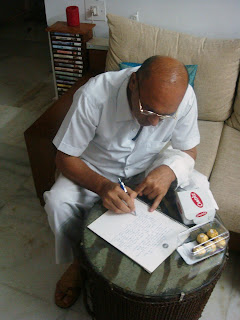 Update: I am pasting this comment from my friend Harshad Rajadhyaksha, a Maharashtrian with the heart of an Irani  Cafe owner and a Bengali Union leader. I had read about this sometime back and thought that this is an interesting peak into the past of Harshad's beloved Mumbai:

"Kalyan, here's a little bit of trivia on the Iranis of Bombay, that I had come across a while ago. Apparently, early last century, Bombay was seeing its first crop of 'block' buildings, with commercial spaces available at the ground level. While the predominant Gujarati traders lapped up most of these spaces, the prevailing superstition amongst them was that the corner shops, with their 'goumukhi' shape (like a cow's face) were inauspicious for business. So these technically premium places, which gave access to the premises from two streets largely remained unoccupied.

And one community's superstition was another's profit. So the Iranis who had come in and were setting up their restaurants couldn't believe their luck, and lapped up many of these building corner shops.

So even today, so many of Bombay's remaining Irani cafes are found on building corners!"
Icons Mumbai local Parsi food - the better half South Mumbai

Harshad said…
Nice anecdote from Mama.. Reminds one of times when ad agencies could behave with their clients in a similar manner ;-)

Kalyan, here's a little bit of trivia on the Iranis of Bombay, that I had come across a while ago. Apparently, early last century, Bombay was seeing its first crop of 'block' buildings, with commercial spaces available at the ground level. While the predominant Gujarati traders lapped up most of these spaces, the prevailing superstition amongst them was that the corner shops, with their 'goumukhi' shape (like a cow's face) were inauspicous for business. So these technically premium places, which gave access to the premises from two streets largely remained unoccupied.

And one community's superstition was another's profit. So the Iranis who had come in and were setting up their restaurants couldn't believe their luck, and lapped up many of these building corner shops.

Kalyan Karmakar said…
Glad you folks liked this. I was just a narrator here. The photo of the board is not mine. The story is Mama's. The info is Harshad's. That's what Finely Chopped is meant to be
30 June 2010 at 09:47

The one Irani cafe in the vicinity of the Central Bank that I know of is Cafe Military. Their kheema pav is still outstanding!
14 July 2010 at 17:08

Amanda said…
Hi
My name is Amanda and I'm writing from OgilvyOne in London. We love your stories! We would love to use them in our campaign and would like to get in touch with you to discuss this further. Please could you contact us via amanda.hurst@ogilvy.com.
Looking very forward to hearing from you!
Amanda
13 July 2012 at 14:53