on June 17, 2010
Happy Fork texted me about The Bespoke Café. She did this when she heard about my back breaking experience at the Indigo Deli, Palladium. “The chairs at bespoke are very good” she vouched. “As is the pepper steak burger”.

Bespoke Café is a bit difficult to find. As Happy Fork said, it’s possible empty because it is not easy to spot. It is inside The Collective Store at one end of the second floor of Palladium. The second floor doesn’t have loos but the store had a couple of very Greek (white and blue themed) elegant loos which were almost the size of the bedroom in our earlier flat. 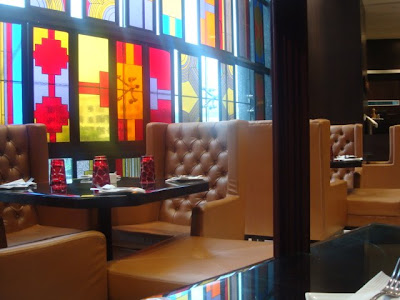 Bespoke Cafe does look very different at the first glance itself. Stained glass windows. Colourful red glasses on the table. High backed leather sofas reminiscent of the proverbial stretch limo. The sofas were fairly comfortable to sit on. One could spread out unlike in the large, yet cramped and packed, Indigo Deli. The only catch was when you tried to eat. It was a bit difficult to reach the table while sitting on the sofa. Though the head waiter, very thoughtfully, pushed our sofas in after the food arrived. Which was a lifetime after we ordered. But the quality showed the value of ‘slow food’ 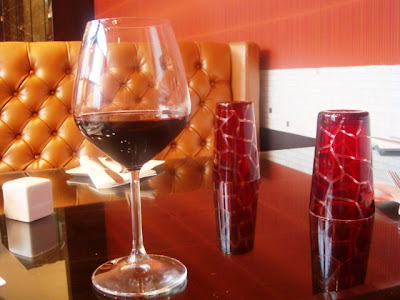 I started off with a Sula Merlot. I don’t claim to understand wines. But this had a  playful bouquet (fragrance) and had a nice chirpy taste. Just what one needed to liven things when it was pouring and dark and wet outside. 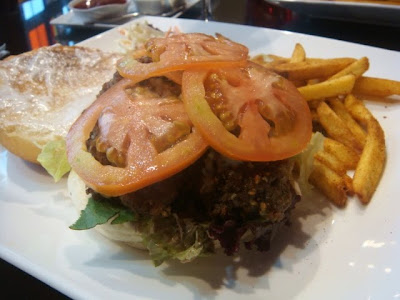 I ordered a blue cheese pepper burger, medium to well done. This was recommended by Happy Fork. It did take some time to arrive after we ordered. But my eyes lit up when it did. A mound of rich, succulent meat. I could almost hear Tony Bourdain say ‘come to Mama’ as this was brought.

The burger patty was as royal and robust as it looked. The meat was tender with the odd scrunch as it was done medium to rare. Very juicy. Luscious.

I have developed a taste for blue cheese thanks to Jamshed Uncle who is really fond of it. I wondered how this very strong tasting cheese would sit in a burger. Well, as the head waiter explained, the cheese had seeped into the burger. The resultant taste was a muted milky, cheese taste which cut through the beef and made its presence felt in every bite. It teased but didn’t drown. Very different from Thousand Island dressing in the Indigo Deli sandwich which dominated everything else just as those blasted Vuvuzela Horns do during the Fifa World Cup games at South Africa. 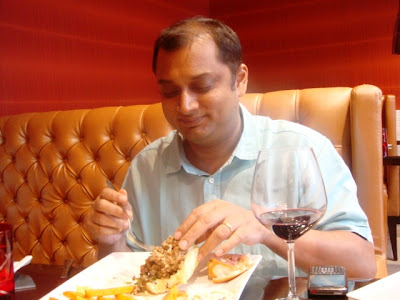 I have often said ‘pshaw’ when American food shows on TV go ballistic over burgers. How can ‘fast’ food awe and be considered haute cuisine? Typical American exaggeration. Well the burger at Bespoke Café made me rethink my world view on burgers. Yes, burgers can be special. 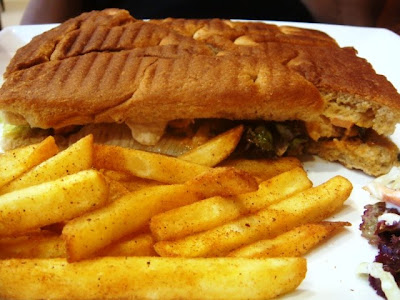 We also ordered a grilled chicken pesto with goat cheese sandwich. I had a bite from the corner of the sandwich without the chicken. Tasted pretty and well flavoured. Once again I could taste the cheese unlike in the Indigo Deli sandwich which had claimed to have ‘Swiss Cheese’ in it.
We were too stuffed and stretched for time to try dessert and coffees.
I am quite sure that I’ll come back to Bespoke Cafe. It has a far more limited menu than Indigo Deli. But shows a lot of promise. As the head waiter told me, it’s run by the same folks who run Mocha and Salt Water Grill. The pedigree showed. 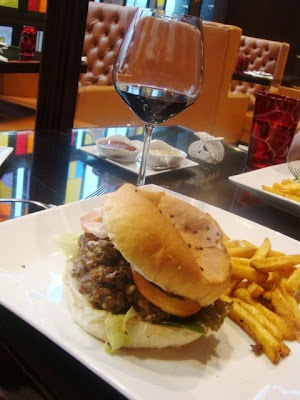 Happy Fork said…
Wonderful read about a wonderful place! Service is probably slow cos they make it fresh and slow....like u said,worth it...
Hoping to try the omelettes next time
Heard the veg bean burger is also good.
Gotta check out those loos too!
17 June 2010 at 21:12

Journomuse said…
I used to be a huge fan of Indigo Deli's(Andheri Lokhandwala) breakfast while I was in India. Btw, where is Palladium?
18 June 2010 at 15:21

Unknown said…
I had coffee there one afternoon- i escaped from work with my laptop to work in isolation and come up with ideas. Bespoke happened to be PURRRFECT for that (considering Costa is too distracting). Coffee was good.
19 June 2010 at 13:51

Shaswati said…
Going by your words, sauntered in to this cafe last Saturday. the ambience is really nice - a quiet tucked away place. The food - mixed feelings. Omlette was just yum, the black bean burger was very average (perhaps not good for hard core non veggies like me!), blue cheese pepper burger had tough meat. Thanks for the tip though. :)
21 June 2010 at 11:10

Miri said…
Another place to add to my list of must eats in Mumbai! I almost wanted to see if I could find a number to call you last week when I was in town for a day and needed a recommendation for lunch at Worli - eventually of course, traffic and client meetings intervened and we had to make do with a quick lunch at the Udipi next to Nooranis - not sure when I last had a meal for two at Rs. 250! Just for that it was worth it
21 June 2010 at 11:40

@Journomouse: the other cafes at Phoenix are so hot. The ACs barely seem to be on. This did seem to be a good place to work

@Shaswati...thanks fot the update...always helps to get feedback at diff points on different dishes

@Miri...oh you should've mailed me. Caramel custard at Noorani is really good. Don't think much of the biriyani though
21 June 2010 at 15:12