And now back to food... pasta on the run

on July 30, 2010
This post is for those who found my last post a bit too Agony Auntish or Chicken Soupish.

I am more of a Chinese noodle fan than a pasta fan. But over the years I have experimented a lot more with pasta dishes than I have with noodles. I guess pasta inspires me more than noodles does.

I tried a couple of very simple and quick experiments with pasta recently. Turned out to be really easy to make and pretty tasty too. Met my requirements for office lunches - quick to cook, no effort, easy to carry, tastes good later.

It all started with some penne that Banu had boiled and kept in the fridge.

Cut little bits of cheese and strips of ham and add it to the boiled penne in a micro bowl. Add some salt and crushed pepper, a few drops of Tabasco sauce. Add a teaspoon of olive oil and toss the penne mix in it. Bung it in the micro and heat it for a minute.

The result is a pasta dish which is not creamy, is dignified and yet rich and aristocratic in taste. I must admit that we had some very good ham and cheese that we bought from Sante. Barbecue ham and Da Vinci cheese (olive infused Gouda) both picked for us by the lovely Milinda of Sante at Pali Naka, Bandra. I am sure the dish will work with regular cheese and ham too. I must have used a finger sized piece of cheese and 3 or 4 thin strips of ham.

The cheese pieces melt and yet retain their shapes leaving an uneven, unpredictable and tongue teasing taste of cheese through the dish. I had this as a pre-dinner snack and smiled happily through dinner later. 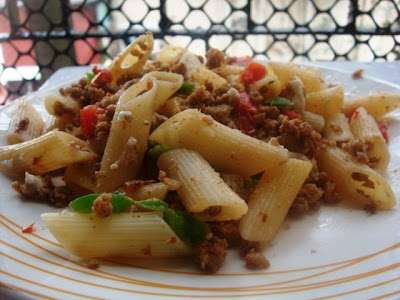 Saute mince meat in a bit of olive oil, pepper and salt and set aside. I used chicken mince.

Add the mince to some boiled pasta (volume ratio of meat: pasta = 2:3). Add a teaspoon of olive, a tablespoon of ketchup, salt, pepper to this. Bits of cheese. I used the remaining Da Vinci and a bit of French Feta which, again, Milinda introduced me to. The feta gave a sharp salty bite.  Also add some chopped tomato and green bell pepper. Bung this in the micro and you are done.

The resultant dish is light. There is a faint memory of cheese without being doused with cream. The pasta, ketchup, minced meat and olive combine very well together to give a fresh and sunny Mediterranean flavour. I ate this for breakfast before work one day :)

I guess it pays to keep some boiled pasta in the fridge.
Conti Lazy cooking Recipes

Scarlett said…
How I love your food posts :)

Whenever I make pasta in red/Arrabiata sauce, I always add some cheese to it just minutes before I'm about to take the pasta off the stove. The cheese bits melt slightly yet retain their shape & are real tongue-teasers.
30 July 2010 at 11:29

Kalyani said…
Kalyan,
When I heard that GOVIND BHOG rice is available at BIGBAZAAR outlets now,......the first thought that crossed my mind was your love for that rice.Enjoy.
30 July 2010 at 14:48