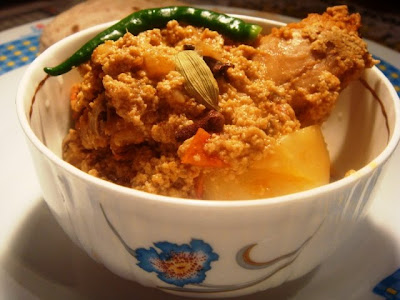 I am quite sure that there is actually a Bengali dish called Posto Murghi (Chicken in poppy seeds). The Ghotis (Bengalis from West Bengal) would have thought of that. They are the priests of poppy or posto after all.
I am a Bangal (Bengali from East Bengal). Well, my parents were born in Bangladesh, though neither lived there. But I love alu posto (potatoes in poppy seeds). So I am sure that my attempts to stray into Ghoti territory can be allowed. The dish I am writing about is posto murgi in essence. It is definitely not the traditional or authentic recipe though. But I can vouch for its taste.
Today Banu, who pretends to be our cook and is more my sous chef, called me at work for instructions on what to make for dinner. I instructed her on how to make a version of posto chicken. I had conjured the dish up myself and left the base masala at home for her.
I was quite pleased with the end result. The dish was nice and light, subtly flavoured, with the crushed posto giving it a bit of character. It worked pretty well for dinner in my opinion as it was well flavoured and yet not heavy and didn’t tax one.
Following it up with Ferrero Rocher and then some of the lovely Chinese tea that Neera gave me in KL seemed just right. Check out the beautiful tea set that she gave us. Now you know why I am so in love with KL and its people. 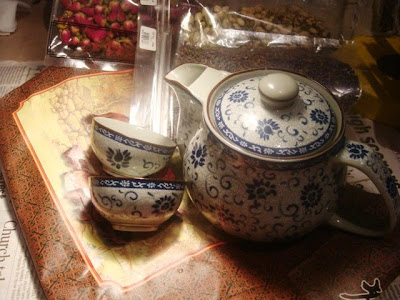 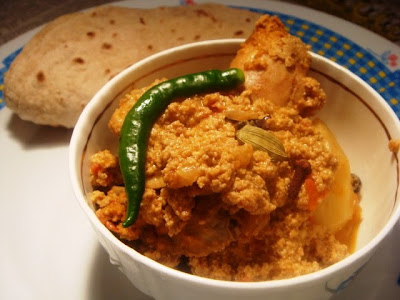 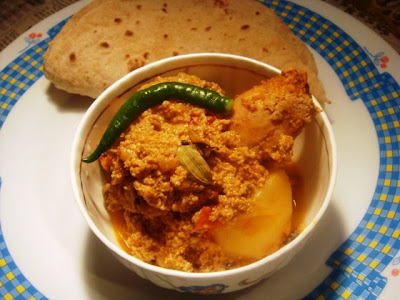 Sharmila said…
I have never got myself to try out the posto chicken yet .. no ... not even in the Puja stalls. Must try this out someday soon ... the ginger+garlic+tomatoes+cumin with posto sounds intriguing.
Ghoti bati beshi bujhina .. ja bhalo lage tai ranna kori. :-)
22 July 2010 at 08:36

There is actually a recipe for posto chicken in a bangla cook book that I have. And loads of other odd recipes that can be cooked with posto. :D
22 July 2010 at 08:42

Otrivin said…
Hi Kalyan, it was great reading your blog. You sure have some awesome posts and recipes.
We would like to inform you about an initiative for cleaner air that we will be starting from the 24/07/2010
Kindly join us in this initiative at http://www.facebook.com/letsdecongest
22 July 2010 at 11:52

Ushnish Ghosh said…
Dear Kalyan
Thats a great dish indeed..must try soon.. although I havent developed taste for chicken yet (barring the BBQ)
Who cares about authentic/ fake , the dish has to be tasty.
have a nice day
Ghosh kaku
22 July 2010 at 11:58

S said…
hi, that maade for an interesting read and a must try recipe too :)

incidentally, on the subject of the gohti thing, ghotis of yore apparently did not consider chicken to be meat, for 'mangsho' could only mean mutton. chicken was apparently considered the new fangled obsession of the modern generation.

such was the disdain for chicken, i am told, that my grandmother (father's mother) only deemed it fit to cook chicken as late in her life as on the day of a party thrown in honour of her son's first wedding anniversary (and that too because there was no mutton available that day for some reason and she could not bear to see guests not being fed meat if they had been called home for a meal) :) and that too, in a vessel kept entirely separate from the other household utensils.
22 July 2010 at 15:16

Shaswati said…
Kalyan - it is true that chicken was thought of rather poorly by ghotis. But there is a posto murgi by ghotis - it is white looking, made with posto & cashew paste. But, it was originally made for posto mangsho, as in for mutton. In case you are interested, I can mail you the recipe. :)
22 July 2010 at 15:51

Btw just to add to all the information. Chicken to most Hindu Bengalis was a Muslim thingie and not 'pure' enough.

That is the reason 'pure' benagli brahmins can have meat but not chicken. or a duck's egg but not a hen's.

also like Shaswati said posto with cashew paste is a nice combination for chicken and I have been making it for quite sometime with good results.
22 July 2010 at 19:34

Kalyan Karmakar said…
@meeso: hope you listened to her :)

@Sharmila: Agree with you hundred per cent. I like a bit of sweet in my food despite being a Bangal

@Sasha that sounds great. We made posto dhyarosh in the style of alu posto. Not bad

@Ghosh Kaku, completely agree. I too judge a dish by whether I like it or not. Simple

@Pinku: read about the chicken phobia in Chitrita Banerjee's book too. We moved into chicken thanks to my mom and her health consciousness. Of course used to have chicken before that abroad...with skin :) Used to have chicken and chips as a kid