The impression that I had of Batu Firringhi was that of a local Ibiza, a mix of North and South Goa. It was to the opposite of Georgetown, the part of Penang that I was in.
I headed there last evening in a bus which cost me 2.7 Ringgit (Rs 45) versus 40 Ringitt (600) of a cab. A forty minute ride. I got a seat in the crowded bus. The only bright spot in the evening. 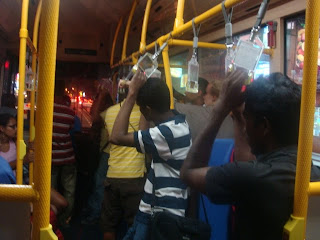 I got off at the night market. I am sure that Kainaz would have tripped over it. I was out of place. I walked across miles and miles of fake Omegas, fake Pradas and fake DVDs. Crap key rings, fridge magnets, scarves, bookmarks which you distribute after a trip abroad. As Bourdain says, there's probably a factory in Taiwan which makes the handicrafts which get sold at tourist hotspots all over the world.

I walked and walked but couldn't find the promised El Dorado of food. 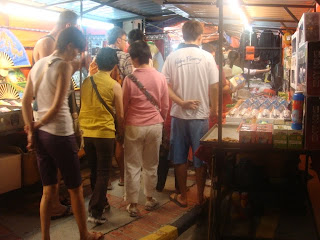 I saw a few restaurants which were completely empty. Not a good sign. Finally went to an Indian shop which at least had a few foreigners eating there and a table with locals. I had a 'martabak'. This is a paratha stuffed with fried eggs, boiled potatoes, peas and boiled chicken and served with a unusual tasting daal. The martabak was piping hot and freshly made. The lady who cooked it got it to the table. It was a bit bland dry for my taste and I asked for a chilly padi (chilly in soy dip) which livened up the dish. 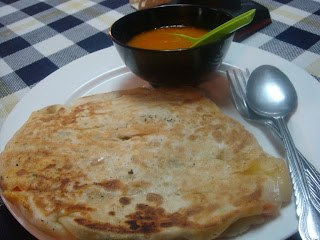 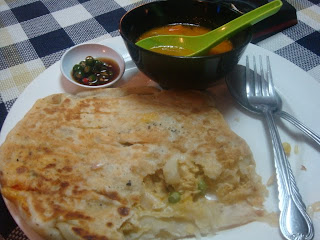 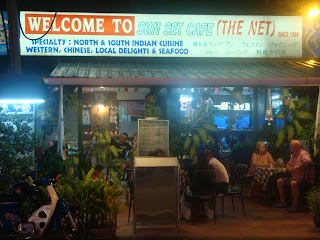 I walked a bit more and found that I had missed the last bus! A local Indian shopkeeper offered to drive me back in his car for 30 Ringgits. I knew that there was no other option. Plus the the fare seemed a good deal. So off we went.
Then, as it has happened time and again at Malaysia, my low spirits were lifted by the warmth of local. Kanan, who drove me back, was quite chatty. A second generation Malaysian. He told me about his roots. His wish to go to India and see Delhi, Bombay and specially Kashmir in one week. His philosophy of 'respect others and others will respect you'. His love for Tamil films. And the story of how his girlfriend dumped him after he (!) found her cheating with him. A story he recounted with a wry smile. 'It's all about the money', he said. 'KFC which cost 8 Ringgit is 10', as he summed it up.
From him I realised that I had reached close to the food oasis of Batu Firinghhi. That there indeed is a fantastic array of food. That I had missed it thanks to the fake Crocs.
Well, Kanan's cheer rubbed off onto me. Tired, hungry I came to the conclusion, 'what's a food adventure without the odd misadventure.'
Faraway foods malaysia united Penang Live

Pinku said…
that comment from K shows that a real Prada is the price Knife will pay for that comment. ;)