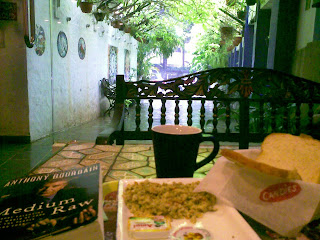 Breakfasts are big in my scheme of things.
And it doesn’t get any bigger than sitting on my favourite bench, in my favourite food haven, watching the rain come down relentlessly through the cheerful trees in the Christian Andersen pathway in front of me. Dimwit new waitress survived as the trusted, competent Cynthia came to my rescue and took the order. Hope that's her name.
Strong acrid coffee hitting the sweet spot. The tiny cherubic petite fours that won my heart over years back. Sugary bursts of joy. Bites of spicy green chilli in a simple egg bhurjee (Indian scrambled eggs) piercing through the wet weather. Slapping on pats of forbidden butter on plain white slices of bread. Smiling dreamily. Cocooned from reality. Let’s leave that sh$% for  black and white European films.
I know that this is not feasible in real life. A life where one “...gets up in the morning earlier than one would like, drags oneself across the town to do things one wouldn’t ordinarily do in one’s leisure time for people one doesn’t particularly like...”. ‘Selling out’ as Bourdain calls it. (Medium Raw... Anthony Bourdain)
Now I know that it’s fine and sexy to say this. But the harsh reality is that no one lives the life of Wodehouse’s Bertie Wooster, funded by Uncle Percys and Aunt Agathas. As the jobless protagonist says in Sankar’s Middleman, with typical Bengali cynicism, ‘those who have jobs are the ones who look down upon jobs. Not those who don't have them’. (I have paraphrased heavily here. The book was made into the film Jana Aranya by Satyajit Ray). Yes, we have all grown up on stories of the ‘starving children of Somalia’. Smug as it sounded in the India of Kalahandi. But still there are times when you just want to live and not think. Thinking is overrated. Just as living is underrated.
It’s easy for me to pontificate. I am in a six day break between jobs. In other words in a world where there are no swipe cards, targets, deadlines, telecalls (!!!!!!) or bad debts to be written off. Things we often confuse with ‘saving the world’. Secure in the knowledge that come Tuesday and I will once again have the assurance of a monthly pay check to philosophise on.
Leisurely breakfasts would be a distant mirage then. At least on weekdays. But I would still never espouse shoving in a slice of bread or a few spoons of muesli gulped before you run for work, a hurried vada pao (Mumbai’s equivalent of New York’s hot dogs) at the railway station, or ice cold, congealed, decomposed, anorexic poha, shira, idli, medu vada or whatever horrors your office canteen inflicts on you.
They don’t tell you this in management books on organisational behaviour but it is worth to take out the time to have a good breakfast. Even if it is a simple hot toast and butter, a bachelor’s delight of fried egg, a quick fried sausage, milk and cereal where you savour each spoonful rather than push it in and for those lucky buggers a hot Indian breakfast which your mom, spouse or P G Aunty (how I miss her) would rustle up for you. Yes, you would lose a few expendable minutes of your life. You would have to wake up early. Or get that damned red mark in the attendance roster. But you would then be more likely to be a ‘benign dictator’ than a ‘sour puss’. Less likely to make your work place hostile for others.
I could have sat at Candies for hours today. Stretched out. Reading my favourite author. Listening to the rain. Savouring the rare space at Candies these days. Eavesdropping on the peppy young college couple sitting in the table to my left. Animatedly chatting, yet to be jaded by reality. The girl talking about how she wants to do many things in life with a very serious face. The 'eff' word featuring a bit too often for my taste. The guy giggling in incomprehension. The two school or early college girls sitting behind me. One admonishing the other for playing on the phone after making her wake up at 8 AM. I feel your pain kiddo. Two gentlemen sitting on another table to my left. Talking about the retail boom, Mumbai’s lack of conference hosting venues, of setting up house in a new city, networking efforts ... over toast, omelette and eggs. More hopeful pilgrims walking in.  Cheerful, helpful security guys offering them shelter from the rain with huge umbrellas.
I could have sat there for hours. But I had to write. The urge was uncontrollable. Even as I read Bourdain espouse ‘submission’ as one ate. Describe ‘taking photos of what you ate’, ‘observing as you eat’ as cardinal sins. (Medium Raw)
I have sinned Father, the keyboard in my head was busy as I had breakfast. But then I would try not to commit what you called the other cardinal sin of food blogging and writing. Making it ‘boring’.
Bandra Bites Breakfasts Candies- my favourite eating place Food musings From the hip

Scarlett said…
Kalyan, your phobia of the F-word is hilarious! Enjoy your days between jobs to the fullest, they come by rarely :)
16 July 2010 at 17:15