on July 01, 2010
This is a difficult post to write. Where being an impartial blogger clashes with basic social courtesy. Let me explain the problem. What would you do if a friend comes all the way to meet you, goes to a place of your choice for lunch, snatches the bill and pays for it despite being younger and a woman and despite it being a hefty amount... and then the food turns out to be unimpressive? Would you pan the food? Or grin and eat it? That was my quandary too. Luckily, well not really 'luckily', our femme Finely Chopped Knight, Ipsita, wasn't impressed herself and broke into a small rash. So time to sharpen the Knife and let go.

In hindsight my choice of Asia 7 at the Palladium mall was a mistake. I had heard bad reviews of it from friends. But we were hungry by the time we met and we wanted a food rush. In the case of both of us the answer to all of life's questions is normally Chinese or at least Oriental food. So we headed to Asia 7 on the top floor of Palladium. The first smell which hits you as you approach Asia 7 is that of Dal Makhni from Jigg Kalra's restaurant next door. As you enter Asia 7 the reassuring fragrance of South East Asian food courts welcome you. Mellowed for Indian conditions of course. A fairly posh place to be in.

We called for Stir Fried Thai Prawns hoping for a dry dish with minimal sauce. Which is what we were assured of by the waiter. Seeing a plate of prawns swimming in a muddy sauce was disappointing for two people who love dry side dishes. Side dishes where the flavours burst out in a medley of tastes. Not those where the meat is doused in sauce. The promised basil was overcooked. It's flavour phantom-like. 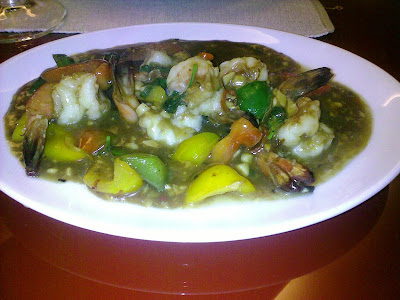 The prawns were fresh and juicy. A bit too underdone. Now the trick about prawns is that you should not overcook them. But then you should not leave it raw either as one could, and did, break into a rash. The sauce was pleasing but not memorable.

Contrast this with Mainland China, Bandra. When they offer to get you prawns coated in very little XO Chilly sauce, they do so. They don't drown it in liquid. At 400 Rs (8 USD) plus, Asia 7 disappointed us with the prawns

The 'mixed' Chinese chicken fried rice was a dampener too. Their idea of 'mixed' was adding egg to chicken fried rice. But egg is basic to fried rice. 'Mix' is if you add red meats and sea food. The rice was completely bland and livened up only when we added the dips. And don't give me that bull about this being 'authentic'. The fried rice that I have had at Chinese run shops in Malaysia and Switzerland are well flavoured and the rice is sticky. This was as 'authentic' as Kites is a 'Western' film. 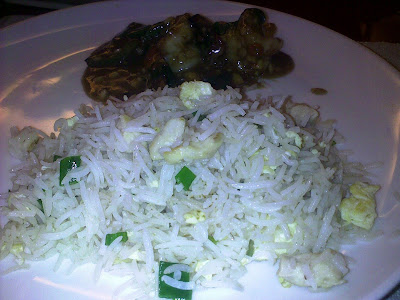 As Ipsita said, we had a much nicer lunch in the humbler Wok Hei across the street. Though she and others have had bad experiences with the noodles at Wok Hei.

Our bad run with food at Palladium continued that afternoon. We went to Indigo Deli for coffee. Once again ordered the Croissant bread pudding with Bourbon. It was lumpy. A far cry from the fluffy drunken pudding from our last visit. Inconsistent.

Thankfully these things don't bug you when you meet wonderful human beings from the world of food. Damp and wet afternoons can still be bright and sunny despite lousy food. As I often say, food is not just about food.

Still, it helps if you get your money's worth. We didn't get that at Asia 7.
Finely Chopped Knights Mumbai lows Oriental South Mumbai Woes

Scarlett said…
Chinese food is indeed the answer to all of life's problems. Followed by a cheesecakes/brownie ;-)
1 July 2010 at 12:47

Kalyan Karmakar said…
@Ash amen to that. Actually did look at the cheesecake brownie at Indigo before settling for the croissant pudding which we had liked the previous time. Should've checked with you :)
1 July 2010 at 13:59

Sanjeeta kk said…
Yes food is not just food, it is sharing experiences and showing that you care.
Good read, felt like coming all the way to Asia 7 and trying food out there.
1 July 2010 at 17:09

Bombay Foodie said…
You should have gone to copper chimney or noodle bar. After my initial euphoria wore out, I even avoid Punjab Grill now.

Kalyan Karmakar said…
@Simran Noodle Bar a la carte is definitely better than this. Manchester Club was good too. But I was chained to the porcelain throne post that
2 July 2010 at 00:40